The highly unusual declaration by Yates was the latest twist in a controversy that has sparked protests at airports across the country and spurred many congressional Republicans to break from the White House. Her statement lent the authority of her office to legal challenges under way against Trump’s order across the country, Bloomberg reported.

"I am responsible for ensuring that the positions we take in court remain consistent with this institution’s solemn obligation to always seek justice and stand for what is right," Yates said. "At present, I am not convinced that the defense of the executive order is consistent with these responsibilities nor am I convinced that the executive order is lawful."

...Senators should focus their energies on ISIS, illegal immigration and border security instead of always looking to start World War III.

Yates, an appointee of former President Barack Obama, was asked to stay on by Trump until his nominee for attorney general, Alabama Senator Jeff Sessions, is confirmed by the Senate. But Trump could fire her at any time.

Trump made his annoyance plain in a tweet but didn’t indicate his next step.

“The Democrats are delaying my cabinet picks for purely political reasons,” he said on Twitter. “They have nothing going but to obstruct. Now have an Obama A.G.”

Stephen Miller, a White House senior adviser who helped write the Trump administration order, said on MSNBC Monday evening that Yates’s statement was “a further demonstration of how politicized our legal system has become.” He said the president has “the absolute right” under immigration law to exclude any class of visitors from entering the country. 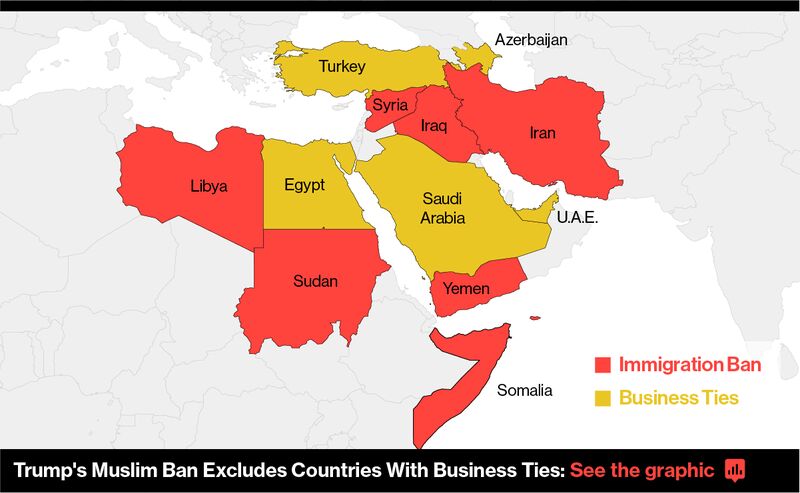 “The president has that authority,” Miller said. “It’s been delegated by Congress.”

Legal challenges to the executive order have been mounted across the country already, with civil liberties groups saying they will work to have the entire action overturned by the courts.

The American Civil Liberties Union has said it will be among the groups undertaking a wider challenge, fueled in part by millions of dollars in donations over the weekend. And attorneys general from 15 states and Washington, D.C., have issued a statement condemning the move and pledging to combat it. The attorney general in Washington state Monday night filed a suit over Trump’s order.

“For as long as I am the acting Attorney General, the Department of Justice will not present arguments in defense of the executive order, unless and until I become convinced that it is appropriate to do so,” Yates said in her statement.

The action by Yates followed protests that sprang up at airports nationwide after Trump signed the order last Friday, criticism of the immigration restrictions from corporate executives and signs that congressional Republicans were feeling pressure to distance themselves from the administration. Former President Barack Obama took the extraordinary step of entering the public fight over his successor’s policy by giving support to the protesters.

All that put Trump and his advisers on the defensive after a chaotic weekend during which they tried to clarify and adjust the order that set new barriers to entry for people from Syria, Iraq, Iran, Sudan, Somalia, Yemen and Libya.

The administration said the executive order had been carefully crafted and well implemented. Trump, in a tweet, said Homeland Security Secretary John Kelly “said that all is going well with very few problems.”

Some Republicans in Congress said they hadn’t been consulted and signaled they will demand explanations from the White House.

Dozens of lawyers have set up camp at JFK airport, working shifts to be available to those affected by #MuslimBan Ã°ÂÂÂ¥#BehindTheScenes@GMB pic.twitter.com/OpeyKDJfGn

Kelly, who has not appeared in public to speak about the order, is planning to head to Capitol Hill Tuesday to meet privately with House and Senate leaders, including Republicans and Democrats from key committees, according to two congressional aides.

“I think they understand that this was not handled in the most productive manner,” Senator Bob Corker, the Tennessee Republican who serves as chairman of the Senate Foreign Relations Committee, told reporters. Corker said he wasn’t briefed before the order landed, and said he hopes there’s more communication and an inter-agency process next time for something so far-reaching.

“My guess is they’re going to try to clean it up,” Corker said.

Florida Senator Marco Rubio, who ran against Trump for the Republican nomination, said he had been trying to get more information about the orders but that State Department officials told his staff that they had been ordered not to talk to Congress.

“There is no doubt” that multiple committees will be asking administration officials to explain the policy, he said.

House Appropriations Committee Chairman Rodney Frelinghuysen, whose control over all legislation spending federal money makes him a key figure in Congress, warned of a potential investigation of the disruption in enacting the order.

“This weekend’s confusion is an indication that the details of this executive order were not properly scrutinized,” the New Jersey Republican said in a statement. “Congress has important oversight responsibilities over all executive orders, which we intend to exercise.”

White House press secretary Sean Spicer said staff members of congressional leadership and “appropriate” committees were involved in the drafting process, but refused to say who had been consulted. Over the weekend, aides insisted the order had been shared with individuals at the departments of State, Justice, and Homeland Security before it took effect.

But a Republican congressional aide said the House Homeland Security Committee wasn’t consulted on the order, and an aide to a Republican House Judiciary Committee member said he wasn’t aware of any committee members or staffers being consulted. On Sunday, a senior leadership aide said congressional leaders had no role in drafting the executive order.

Republican Representative Dave Reichert of Washington said in a statement that while ensuring public safety was a serious responsibility, “what we saw this past weekend was mass confusion and miscommunication between government agencies and the improper apprehension of people legally allowed to be in the US.”

In another sign that the order was rushed through, the Pentagon began assembling a list of Iraqis who had worked as translators for U.S. troops or otherwise supported American forces as partners to protect them from being caught in the immigration crackdown, Captain Jeff Davis, a Defense Department spokesman, told reporters at the Pentagon.

Obama took the extraordinary step earlier in the day of entering the debate, issuing a statement through a spokesman expressing support for protesters and declaring his opposition to discrimination.

Obama’s statement broke with a recent tradition of former presidents refraining from injecting their views into debates about actions taken by a new administration, particularly in its early days. Before he left office, Obama said he would speak up for what he said are fundamental American values, and his statement was couched in those terms. While it avoided direct criticism of Trump, the meaning was clear.

“President Obama is heartened by the level of engagement taking place,”’ Obama spokesman Kevin Lewis said in a statement e-mailed to reporters Monday afternoon. “Citizens exercising their Constitutional right to assemble, organize and have their voices heard by their elected officials is exactly what we expect to see when American values are at stake.”

The former president “fundamentally disagrees with the notion of discriminating against individuals because of their faith or religion,” Lewis added.

King Abdullah II of Jordan, a U.S. ally whose country has borne the brunt of the refugee crisis caused by fighting in Syria, was in Washington on Monday and met with Vice President Mike Pence. Dealing with the threat of terrorism was among the topics, as was Trump’s promise to move the U.S. embassy in Israel from Tel Aviv to Jerusalem. The immigration order wasn’t directly mentioned, but the statement from the Abdullah’s office noted that the king told Pence “Muslims are the number one victims of the outlaws of Islam.”