Kim said the regime’s nuclear test site will be shuttered, according to the Korean Central News Agency. Punggye-ri, built in a secluded mountain valley northeast of Pyongyang and the site for all six of the regime’s nuclear blasts, has already been in doubt amid signs of structural weakness, and some observers have said it would be unsafe to do more tests there, according to Bloomberg. 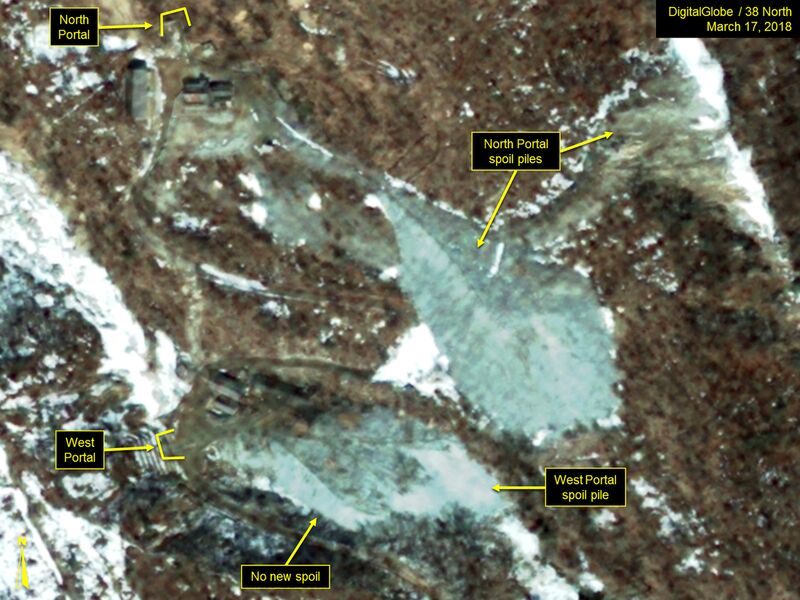 “I solemnly declare that we have accomplished credible weaponization of nuclear forces,” Kim was quoted as saying at a Friday ruling party meeting. “Our decision to suspend nuclear tests is part of the world’s important steps for nuclear disarmament and our republic will join global efforts to completely suspend nuclear tests.”

The comments come ahead of his talks on April 27 with South Korean President Moon Jae-in and a planned summit with U.S. President Donald Trump in May or June. While Kim’s statement that he has achieved his desired deterrent is largely a reiteration of prior claims -- and he made no commitment to giving up the weapons he has already acquired -- the pledge to mothball the test site suggests he’s seeking to further ease tensions ahead of those meetings.

A spokesman for Moon said Kim’s statement was a positive sign, while Trump praised it in a tweet, calling it “very good news for North Korea and the World.”

“Big progress!” he added. “Look forward to our Summit.” In a later tweet he noted that North Korea would “shut down a nuclear test site in the country’s Northern Side to prove the vow to suspend nuclear tests.”

North Korea has already effectively halted weapons tests for about five months, after firing a missile on Nov. 29 believed to be capable of reaching any city in the U.S. After that launch, which prompted the most restrictive United Nations sanctions yet, Kim declared his regime’s decades-long quest for nuclear weapons “complete.”

Commercial satellite imagery of Punggye-ri from March 17 showed no evidence of tunneling operations or personnel or vehicles in key areas, according to the 38 North website, which monitors North Korea.

Tunnels at the site suffered cave-ins during and after each nuclear test, said Hong Tae-kyung, a professor of geophysics at Seoul’s Yonsei University.

“A fair amount of tunnels have collapsed and there’s even a possibility of radioactive leaks there,” said Hong. “Realistically, it’s highly unlikely they can be used for nuclear tests any more.”

If North Korea resumed nuclear testing at some point it would probably pick another site in the less-populated east with lower risk of contamination for Pyongyang, Hong added.

Friday’s meeting of the Workers’ Party agreed that the suspension of nuclear tests was “an important process for the worldwide disarmament,” KCNA reported. “The DPRK will join the international desire and efforts for the total halt to the nuclear test,” it added, using the initials for North Korea’s formal name.

Shin Beomchul, a professor at the Korean National Diplomatic Academy, called Kim’s comments a “very carefully coordinated calculation to build hopes of the world that it’s open to changes that could possibly follow the summits.”

“It’s still hard to tell from the statement if it has genuine intent to denuclearize,” Shin said. “Contents-wise, there’s no real change in its position.”

Kim has long said he wants his country to be recognized as a nuclear power, but nations including South Korea and the U.S. want him to dismantle his arsenal. Any progress on that front is likely to be slow and fraught, and prior efforts involving Kim’s late father when he was leader collapsed in acrimony. The weapons are Kim’s only serious card in dealing with the outside world.

In a speech on Thursday, Moon warned that implementing any deal with North Korea would be challenging, even if he was optimistic about reaching an “in-principle” agreement.

Still, the regime is feeling the economic squeeze of sanctions, including by neighbor and ally China. And Kim at the party meeting spoke of the need to prioritize the development of his impoverished country.

The North Korean leader has placed greater emphasis on the economy since taking power in 2011, a shift that could make any offers of outside aid more appealing in negotiations. In 2013, Kim for the first time declared his goal of “simultaneously‘’ pushing forward economic development and his nuclear force.

Kim’s statement is a “major opportunity to bring the Korean Peninsula out of the Cold War shadows,” China’s state-run Global Times said in a commentary. “It is hoped that Washington will take real action to consolidate the upbeat atmosphere, which includes scrapping U.S.-South Korea joint military drills or considerably reducing the size and frequency of the drills at the very least.”

The U.S., South Korea and Japan should immediately lift sanctions on North Korea except for broader UN-agreed penalties, it said. Foreign Ministry spokesman Lu Kang said in a statement that Kim’s actions would help promote a political settlement to the tensions.

Japan though expressed some skepticism.

“We have made many promises with North Korea, we paid money on the condition that they would end a test facility and such,” Finance Minister Taro Aso told reporters in Washington. “But I remember that they just took our money.” Prime Minister Shinzo Abe told reporters it won’t change how Japan handles the regime, Kyodo News reported.

Two U.S. officials who asked not to be identified said there was no reason not to believe Kim’s pledge was genuine. U.S. pressure had changed the calculus for Kim, one official said.

“This is a very serious initiative, it fits right in with North Korean policy and what they’ve been saying for a while,” said Joel Wit, a senior fellow at the US-Korea Institute at the Johns Hopkins School of Advanced International Studies who was involved in North Korea talks from 1993 to 1995. “They’ve decided that this is the moment to shift gears and to focus on developing their economy, end of story.”

North Korea won’t give up its nuclear weapons without reciprocal steps from the U.S. and others, he added. “But this is another sign that they are serious.”