"Meeting went very smoothly and a good relationship was formed,” Trump said in a Twitter posting Wednesday morning. “Details of Summit are being worked out now. Denuclearization will be a great thing for World, but also for North Korea!"

Mike Pompeo met with Kim Jong Un in North Korea last week. Meeting went very smoothly and a good relationship was formed. Details of Summit are being worked out now. Denuclearization will be a great thing for World, but also for North Korea!

Pompeo -- who’s awaiting confirmation as secretary of state -- is the highest-ranking U.S. official to visit the isolated nation since former Secretary of State Madeleine Albright in 2000, according to Bloomberg.

The trip comes as the two sides discuss potential sites for the unprecedented meeting between the U.S. and North Korean leaders, which Trump said could come by “early June or before.”

The U.S. president told reporters Tuesday that the administration had “started talking to North Korea directly” and was discussing five potential sites for the meeting. “We have had direct talks at very high levels, extremely high levels with North Korea,” Trump said, after meeting Japanese Prime Minister Shinzo Abe at his Mar-a-Lago resort in Florida.

Any summit would likely be the start of a long and potentially fraught process aimed at getting Kim to give up North Korea’s nuclear arsenal -- something his family has held onto for decades as key to their grip on power at home and their only real external deterrent. A successful outcome might simply be an agreement for talks to continue and a plan for the next meeting.

If Trump and Kim manage to establish a rapport, much like Trump’s first meeting with Chinese President Xi Jinping, it could go a long way to enabling the two countries to overcome tensions that may continue to bubble over Pyongyang’s missile and nuclear weapons tests, and over U.S. military drills that happen regularly near the Korean peninsula.

“It makes the proposed summit all the more likely to happen,” said Suzanne DiMaggio, director and senior fellow at New America in New York, who facilitated the talks in Oslo that resulted in ailing U.S. citizen Otto Warmbier’s release from North Korea. “It is reassuring that the Trump administration is taking serious steps to prepare for that historic interaction.” 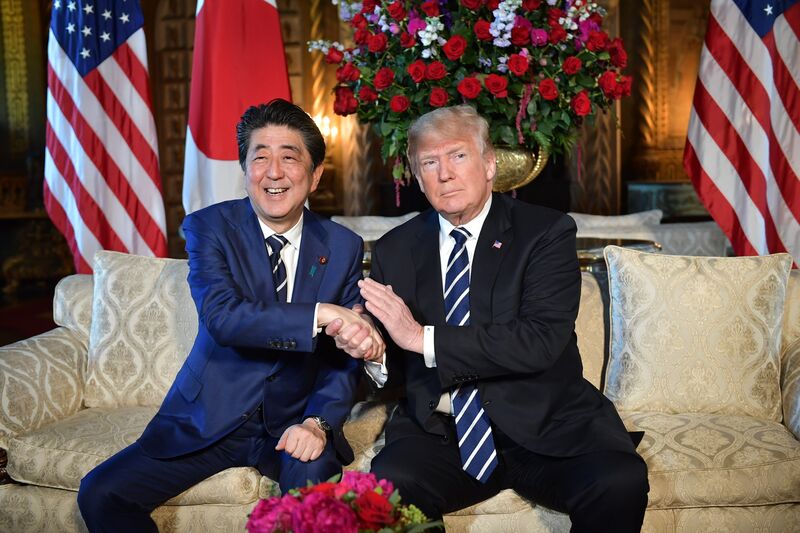 Trump and Abe at the Mar-a-Lago resort in Palm Beach on April 17.

The Pompeo trip, which was first reported by the Washington Post, is part of a global diplomatic scramble after Trump’s March 8 decision to meet Kim to break the decades-long impasse over North Korea’s nuclear weapons program.

Pompeo’s clandestine visit is reminiscent of then National Security Advisor Henry Kissinger’s secret diplomatic mission to Beijing in 1971. Those trips laid the groundwork for President Richard Nixon’s unexpected visit to China the following year, which paved the way to opening up the country.

The Central Intelligence Agency chief arrived in North Korea just days after Kim returned from his own surprise visit to Beijing -- his first trip outside the country since taking power in 2011. Bloomberg had earlier reported that a “very senior” U.S. official spoke directly with Kim, bypassing third parties, citing a person familiar with the matter.

Direct U.S. contact with Kim is “a pretty dramatic development,” said Adam Mount, a senior fellow with the Federation of American Scientists. “Before the summit can happen, talks have to happen at a very high level” to set an agenda and other details, Mount said.

White House Press Secretary Sarah Huckabee Sanders said that Trump hasn’t spoken directly with the North Korean leader. Pompeo, who earlier this year expressed a desire to “separate” North Korea from its regime, told senators considering his nomination as secretary of state last week that there was more room for diplomacy before considering military strikes.

News of Pompeo’s meeting with Kim is likely to boost Pompeo’s chances at confirmation, already shaky due to opposition from many Democats and at least one Republican, Senator Rand Paul of Kentucky. Congress would be less likely to deliver a humiliating blow to Pompeo right at the moment he is Trump’s point man on the North Korea talks.

The U.S. has picked five sites for the Kim meeting, Trump told reporters, saying an announcement would come “fairly soon.” Locations being discussed with North Korea include Geneva and venues in Asia and Southeast Asia, a person familiar with the talks told Bloomberg.

The person said the U.S. wasn’t considering Beijing, Pyongyang, Seoul or Panmunjom, the site of the Korean armistice signing in 1953. South Korean President Moon Jae-in is scheduled to meet Kim at Panmunjom next week, the first trip south of the border by a North Korean leader.

Moon’s planned April 27 encounter with Kim is expected to lay the ground for Trump’s meeting. Trump said he had given Moon his “blessing” to negotiate a peace deal with North Korea, which never formally ended its war with South Korea after agreeing to end open hostilities 65 years ago.

The two sides are discussing plans to announce an official end to the war, South Korea’s Yonhap News Agency reported Wednesday, citing a senior presidential official. South Korea and the U.S. would consider a peace treaty, if the country completely gives up its nuclear ambitions, the official said.

Trump suggested he was responsible not only for the negotiations on a formal peace treaty, but also the success of the Winter Olympics in South Korea. Kim’s Jan. 1 offer to cooperate with Moon on the Games set in motion a series of talks, trips and signals that culminated in Trump’s decision to accept the summit.

“They’ve been very generous, that without us, and without me in particular, I guess, they wouldn’t be discussing anything and the Olympics would have been a failure,” Trump said. “As you know, North Korea participated in the Olympics and it was really quite an Olympics. It was quite a success. That would not have happened.”

Abe said Trump’s “unwavering conviction, as well as his determination,” have made talks with North Korea possible. Trump agreed to raise the issue of Japanese citizens abducted by North Korea in the 1970s and 1980s, a key concern raised by Abe.

“We will bring up the abductees. We’ll bring up many different things,” Trump said. “I know that’s been a very big factor for you.”

Trump said he would meet with Kim in “early June or before that, assuming things go well.”

“It’s possible things won’t go well and we won’t have the meetings,” Trump said. “And we’ll just continue to go on this very strong path we have taken.”