EghtesadOnline: After U.S. sanctions crippled an entire Russian industry and air strikes in Syria threatened the first direct clash between nuclear superpowers since the Cold War, Vladimir Putin is seeking to dial down the tension.

Russia’s leader wants to give President Donald Trump another chance to make good on pledges to improve ties and avoid escalation, according to four people familiar with the matter. One said the Kremlin has ordered officials to curb their anti-U.S. rhetoric, Bloomberg reported.

Putin’s decision explains why lawmakers Monday suddenly pulled a draft law that would’ve imposed sweeping counter-sanctions on U.S. companies, two of the people said. The relatively limited nature of the weekend attacks on alleged chemical-weapons facilities in Syria, where Russia is backing government forces in a civil war, was seen as a positive sign in the Kremlin, considering Trump’s ominous tweets announcing missiles would soon be flying. 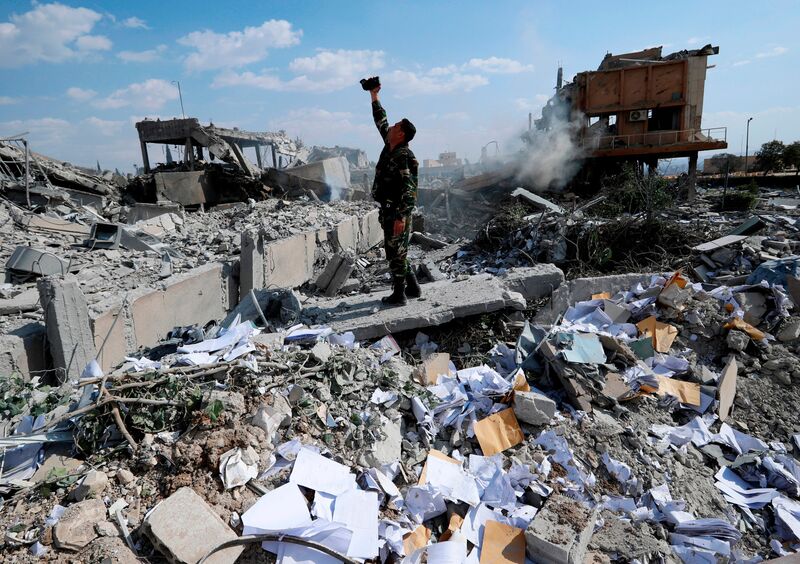 “Putin is ready to make numerous, deep concessions, but he has to appear like he’s not losing,” said Igor Bunin of the Center for Political Technologies, a consultancy whose clients include Kremlin staff. “He understands Russia can’t compete with the West economically and he doesn’t plan to go to war with the West.”

A Foreign Ministry official in Moscow said Wednesday that the Trump administration notified Russia’s embassy in Washington on Sunday that new sanctions would be coming in the near future.

The Kremlin is still coming to grips with the economic impact of the most punitive penalties the U.S. has imposed since first sanctioning Russia four years ago, over the conflict in Ukraine. The latest measures, which Treasury called payback for Putin’s “malign activity” in general, hit one of the country’s most powerful businessmen, billionaire Oleg Deripaska, the hardest.

Shares of Deripaska’s aluminum giant Rusal have plunged about 70 percent in Hong Kong since the U.S. basically banned the company from the dollar economy April 6, erasing about $6 billion of value and threatening 100,000 jobs at a time when Russia is limping out of its longest recession in two decades. Putin, who is due to be sworn in for what may be a final six-year term next month, is keen to avoid having another major company suffer a similar fate.

It could be too late to reverse the downward spiral that’s taken relations to the lowest level in decades. While Trump is open to trying to improve ties, Congress and much of his administration are committed to keeping the pressure up on a country many view as America’s No. 1 enemy after allegations of Kremlin meddling in the 2016 elections.

Further complicating the diplomatic dance are the often-conflicting signals coming from the White House. Trump’s reported decision on Monday to put the brakes on new Russian sanctions triggered a brief rally in the ruble, which fell the most since June 2015 last week. Tuesday, for example, economic adviser Larry Kudlow spooked Russian markets when he said “additional sanctions are under consideration.”

Still, the Kremlin is holding back from further escalation.

On Monday, legislators abandoned -- at least for now -- a bill that would have limited a broad range of trade with the U.S., from farm products and medications to aviation and space. One of the most outspoken critics of the Pentagon, Deputy Prime Minister Dmitry Rogozin, said a proposed ban on selling rocket engines “would hurt Russia more than the U.S.” due to Moscow’s dependence on American contracts.

Even before the U.S. attacks in Syria, the Kremlin told officials to tone down threats of retaliation. Russia’s ambassador to Lebanon doesn’t seem to have gotten the message. In an interview with local television that made headlines the world over, he said Russia wouldn’t hesitate to shoot down missiles and attack whatever platforms they were launched from if its forces were threatened. The Kremlin was livid, according to one official, and the warning wasn’t repeated.

With the initial euphoria over Trump’s surprise election victory long over, officials say they’re convinced there’s little the U.S. president can do to overcome what they see as entrenched anti-Russian bias among a Washington establishment that’s determined to maintain global dominance at any cost.

Last month’s waves of diplomatic expulsions throughout the West over the nerve-agent attack on a Russian turncoat spy in the U.K. accelerated a breakdown in relations that’s been building for years.

Still, officials are holding out hope that Trump might be able to stop the downward slide, especially after he congratulated Putin on his re-election in March and dangled the prospect of a White House summit. But given the current political climate in the U.S. it’s unlikely that any concession Putin may offer would be enough to bring a real thaw.

Plenty of areas of tension remain, including over alleged Russian hacking, trolling and other forms of online aggression. U.S. and U.K. officials this week issued a rare joint warning of what they called stepped up Russian probing of corporate and government computer systems in the West.

The alert included advice to companies about how to protect themselves and warned specifically of attacks on routers, the devices that channel data around a network. While reluctant to give precise details of the threat, officials said once a router is hacked it can be used to capture data and even attack other computers, potentially overwhelming the internet.

But Vladimir Frolov, a former Russian diplomat who’s now a foreign-policy analyst in Moscow, said such cyber-activities don’t usually weigh on state-level negotiations since all countries are pursuing the same capabilities.