Comey Says Trump Is ‘Morally Unfit' to Be President

EghtesadOnline: Donald Trump is “morally unfit” to be president, former FBI Director James Comey said in a highly anticipated prime-time interview Sunday, adding that he couldn’t rule out the possibility that the Russian government has incriminating information about the president.

“I think it’s possible. I don’t know,” Comey said in an interview with ABC News’ Chief Anchor George Stephanopoulos, when asked whether Trump has been “compromised” by the Russians. “These are more words I never thought I’d utter about a president of the United States, but it’s possible.” 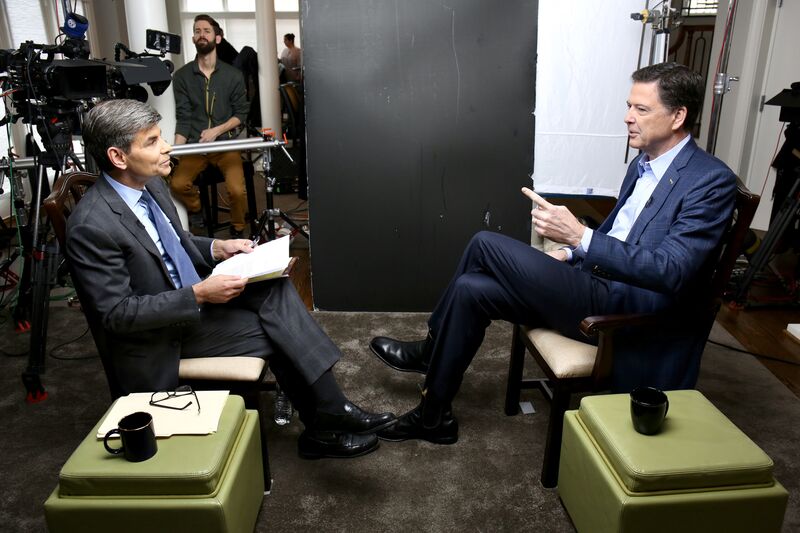 George Stephanopoulos sits with James Comey in an exclusive interview.

According to Bloomberg, Comey said that he had concluded during the presidential campaign that Trump was dishonest. Americans should be united, he said, in the idea that “our president must embody respect and adhere to the values that are at the core of this country. The most important being truth.”

“This president is not able to do that. He is morally unfit to be president.”

.@GStephanopoulos: “Is Donald Trump unfit to be president?”

The comments were made in Comey’s first interview since writing his book, “A Higher Loyalty: Truth, Lies and Leadership,” which is scheduled for release Tuesday. Excerpts have already been widely reported, prompting President Donald Trump and his conservative allies to launch a furious attack on Comey.

“Slippery James Comey, a man who always ends up badly and out of whack (he is not smart!), will go down as the WORST FBI Director in history, by far!” Trump said on Twitter early Sunday.

Trump fired Comey in May, leading to the appointment of Special Counsel Robert Mueller. Mueller’s probe into Russian interference in the 2016 election is reviewing whether Trump obstructed justice by firing Comey, and through other actions.

Comey said the FBI opened its counterintelligence investigation into potential Russian election interference in July 2016, triggered by discussions that George Papadopoulos, a Trump campaign adviser, had in London. The FBI was also interested in Carter Page, another adviser. Comey said an unverified dossier assembled by former British spy Christopher Steele had no impact on triggering the investigation.

Of Trump’s practice of not criticizing Russian President Vladimir Putin, Comey said, “I don’t know what’s behind that.”

Portions of the roughly five-hour interview were aired Sunday night in a one-hour special on ABC.

Comey described a meeting with Trump where the president asked him to “let it go” when it came to the FBI investigation into former National Security Adviser Michael Flynn. He told ABC that he maybe should have said something to Trump at the time to indicate the request was inappropriate.

He said Trump’s request “possibly” amounted to obstruction of justice.

“I mean, it’s certainly some evidence of obstruction of justice. It would depend, and I’m just a witness in this case, not the investigator or prosecutor. It would depend upon other things that reflected on his intent,” Comey said.

Comey, who ran the Federal Bureau of Investigation for almost four years, portrays the president in his book as a liar, dumb and rude, and he compares elements of Trump’s behavior to that of a Mafia boss.

Encounters with the president, Comey wrote, gave him “flashbacks to my earlier career as a prosecutor against the mob. The silent circle of assent. The boss in complete control. The loyalty oaths. The us-versus-them worldview. The lying about all things, large and small, in service to some code of loyalty that put the organization above morality and above the truth.”

Comey also said that he doesn’t know if some salacious accusations in the controversial dossier on Trump are true. He said Trump repeatedly asked about its unverified allegation that Russians had video footage of a 2013 encounter with prostitutes in Moscow.

The thought of having dinner alone with Trump at the White House made Comey “deeply uncomfortable,” he wrote, because he feared that the president wanted to compromise the FBI’s integrity and independence and was waging “an effort to establish a patronage relationship” with him.

Comey also said in the ABC interview that he knew from the start that the Hillary Clinton email investigation was “a no-win situation" given the country’s polarization.

“One half of the partisan divide is going to be angry at us no matter what we do,” he said. He recalled telling his deputy director, “Nobody gets out alive.”

“If you know you’re totally screwed and you know that people are going to be angry at you no matter what you do, you can’t do anything about it," he said. “And you let the facts and the law decide what you should do.”

Comey said that in his view, then-Attorney General Loretta Lynch “could not credibly announce" the result of the inquiry.

“I actually thought, as bad as this’ll be for me personally, this is my obligation, to protect the F.B.I. and the Justice Department,” he said. For Lynch to do it “would do corrosive damage to the institutions of justice.”

But Comey expressed regret over how he phrased his remarks about Clinton’s email practices when he announced the case was being closed. At the time, he said she was “extremely careless” in her handling of her email, which sounded close to the “grossly negligent” standard for criminal charges.

"I should’ve worked harder to find a way to convey that it’s more than just the ordinary mistake, but it’s not criminal behavior, and find different words to describe that," Comey said.

In the ABC interview, Comey said Deputy Attorney General Rod Rosenstein acted “dishonorably” by writing a memo that the president relied upon in part to justify the decision to fire him.

Comey said he regarded Rosenstein as part of Trump’s Mafia family and that he couldn’t trust the deputy attorney general. That was a driving reason he decided to leak a memo that triggered the appointment of Mueller as special counsel.

“The deputy attorney general, in my view, had acted dishonorably by putting out this pretext about why I was fired. So I thought, ‘Well he’s ‘amica nostra.’ Right? He’s part of the family now. I can’t trust him.’ And so what can I do? I can do something now,” he said.

GOP on the Attack

Even before Comey’s ABC interview, the Republican National Committee started an effort to discredit the former FBI director on social media, in digital advertising and through a website, lyincomey.com.

House Judiciary Chairman Bob Goodlatte, a Virginia Republican, said on Fox News Channel on Sunday that Comey was “out for revenge” against Trump.

But House Speaker Paul Ryan said Sunday that Comey was a man of integrity “as far as I know.”

Asked whether Comey is someone he would describe as a “slime ball” -- a term Trump has used twice in tweets -- Ryan said on NBC’s “Meet the Press” that “I don’t speak like that. I don’t use words like that.”