EghtesadOnline: A few weeks ago, Donald Trump invited Vladimir Putin to meet -- maybe even at the White House. After U.S.-led missile strikes in Syria, the two nations’ officials can’t get into the same room without insulting each other.

Speaking at an emergency session of the United Nations Security Council Saturday, hours after the U.S., France and the U.K. launched missiles intended to take out Syria’s chemical weapons capability, American Ambassador Nikki Haley called on Russia -- the main backer of the Syrian regime -- “to take a hard look at the company it keeps.” Her Russian counterpart Vassily Nebenzia retorted that the U.S. and its allies were engaged in the “diplomacy of myth-making.” 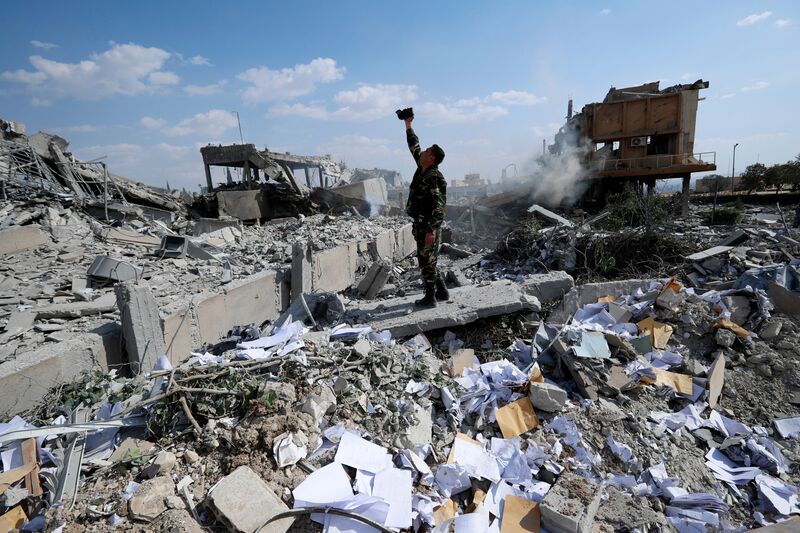 A Syrian soldier at the Syrian Scientific Research Center which was attacked by U.S., British and French forces.

For the moment, according to Bloomberg, the angry rhetoric isn’t scaring financial markets. Oil fell Monday from its highest close in three years in New York amid speculation that U.S.-led military intervention in Syria won’t go beyond the weekend’s missile strikes. The ruble held steady against the dollar as senior officials declared the worst of the crisis over.

But the strikes against the regime of Russia’s ally Bashar al-Assad put an exclamation point on how swiftly ties between the former Cold War foes have deteriorated in recent weeks, with President Trump even overcoming his past unwillingness to criticize President Putin by name.

Now, the U.S.-Russia relationship, already under severe strain over issues from Russian meddling in the 2016 American presidential campaign to its role in Syria and Ukraine, may be irretrievably broken for the foreseeable future. There may be too much bad blood, too much suspicion and too much anger on both sides to turn the animosity around.

“I don’t see things getting better,” said Boris Zilberman, deputy director of congressional relations at the Foundation for Defense of Democracies and a Russia expert. “We’re at a very low point and clearly the administration’s position on Russia has hardened.”

The result has been an unprecedented wave of retaliations and tit-for-tat actions. After the U.K. blamed Russia for the poisoning of a former spy in Britain, more than 150 Russian diplomats were expelled by the U.K. and allies including the U.S. The Trump administration followed with new sanctions on Russian oligarchs including billionaire aluminum magnate Oleg Deripaska. His company lost half its value in a day after the sanctions were announced. 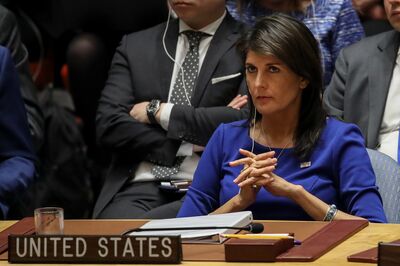 Haley raised the prospect of still more sanctions on Russia, saying Sunday on CBS’s “Face the Nation” that a fresh round of penalties would “go directly to any sorts of companies that were dealing with equipment” related to Assad and his chemical weapons.

While for now no significant new U.S. sanctions seem likely --limiting Russian market losses after last week’s sharp declines -- in Moscow, lawmakers are starting Monday to discuss a draft law with counter-measures against the U.S.

“What kind of cooperation can there be? Where?” asked Fyodor Lukyanov, head of Russia’s Council on Foreign and Defense Policy, who advises the Kremlin. Russia gets “new sanctions and threats every week,” he said. “Americans believe that you can humiliate and put pressure everywhere and at the same time offer cooperation where they need it. This does not happen.”

The two countries routinely accuse each other of fabricating events, as they did during the Cold War.

The U.S. says Russia is blocking investigators from the scene of the chemical attack that prompted the latest airstrikes. Russia has argued both that the attack in the Syrian city of Douma never happened or that it was orchestrated by the U.S. and its allies to provoke a military response.

“Americans need to understand that the wars of the future will look more like this: Russia is investing significant resources to create propaganda and disinformation,” said Senator Ben Sasse, a Nebraska Republican, after Russia claimed that almost all the missiles fired into Syria were shot down -- an assertion the U.S. denied. “Our enemies will work to create confusion and distrust among Americans here at home.”

What limited cooperation there was between the two countries has ground to a halt. A November agreement between the two sides to press all parties in Syria toward negotiations known as the Geneva process has stalled and they have abandoned plans for more “de-escalation zones” to ease the violence. Instead, Russia is attempting to create such zones with Turkey and Iran.

From the White House, there is still hope that Russia will change its posture, and Trump’s informal invitation for an eventual meeting with Putin hasn’t been rescinded.

“After his last call with President Putin on March 20, the president confirmed that the two had discussed a bilateral meeting at a number of potential venues, including the White House,” Robert Palladino, a spokesman for the National Security Council, said in a statement Sunday night. “The desire for a meeting still stands, as the president believes a better relationship with Russia is in our mutual interest. That said, the president has been consistent and tough on Russia.”

“While we would like to work with Russia, we also recognize that an improved relationship will require the Russian government to take positive steps, and the president will continue to hold them accountable for malign activities,” Palladino said.

In the meantime, though, routine diplomacy has given way to pettiness. Russia’s ambassador to the U.S., Anatoly Antonov, can’t get meetings with top officials and had asked for help from Republican Senator Orrin Hatch to do so, Politico reported last month.

Trump, previously reluctant to criticize Putin directly even as others in his administration have done so, has dropped any such restraint. When he announced his plan for the strikes against Syria on Friday night, he said Russia “must decide if it will continue down this dark path or if it will join with civilized nations as a force for stability and peace.”

Valery Solovei, a political scientist at the Moscow State Institute for International Relations, which trains Russia’s diplomats, said “I think, yes, this is the end. And not only in Syria, but also in all spheres of Russian-American relations. Some well-informed sources say Putin is furious and plans to put more hardliners in important positions during an upcoming reshuffle in his administration and government.”

The biggest fear on both sides -- of a hot conflict between the two nuclear-armed rivals -- appears to have been eased for now given the limited nature of the latest strikes in Syria and the use of U.S.-Russian “deconfliction” channels before the attack to make certain their planes weren’t in the same airspace. But the risk of close calls -- and potentially lethal conflicts -- remains.

That was glaringly obvious in early February when U.S. forces killed more than 200 Russian mercenaries who tried to attack a base held by U.S. and mainly Kurdish forces in the oil-rich Deir Ezzor region. The Russian and U.S. militaries both quickly sought to defuse the situation by assuring each other that the mercenaries’ attack wasn’t authorized by Moscow.

“The Russians met their match and a couple hundred Russians were killed,” Central Intelligence Agency Director Mike Pompeo said at his confirmation hearing for secretary of state last week. He said he takes “a back seat to no one” in his view of the threat that Russia presents to the U.S.

Nonetheless, there are signs that the two sides, amid the standoff, haven’t completely cut off ties, providing a thin possibility that the U.S. sanctions, the heated rhetoric and the Russian accusations of U.S. mendacity mask a desire to get along.

“Russia’s position was taken into account,” said Elena Suponina, a Middle East specialist at the Russian Institute for Strategic Studies. “No red lines were crossed.”