EghtesadOnline: Russian President Vladimir Putin denounced strikes on Syria by the U.S., France and the U.K. as an “act of aggression” but made no mention of possible retaliation for the highly anticipated attack on his Middle Eastern ally, easing for the moment fears of a wider conflict.

The dozens of missiles and bombs fired at a handful of sites early Saturday didn’t enter airspace guarded by advanced systems above Russian bases near the coast, the Defense Ministry in Moscow said. There were no casualties, either Syrian or Russian, or serious damage inflicted, the ministry said. 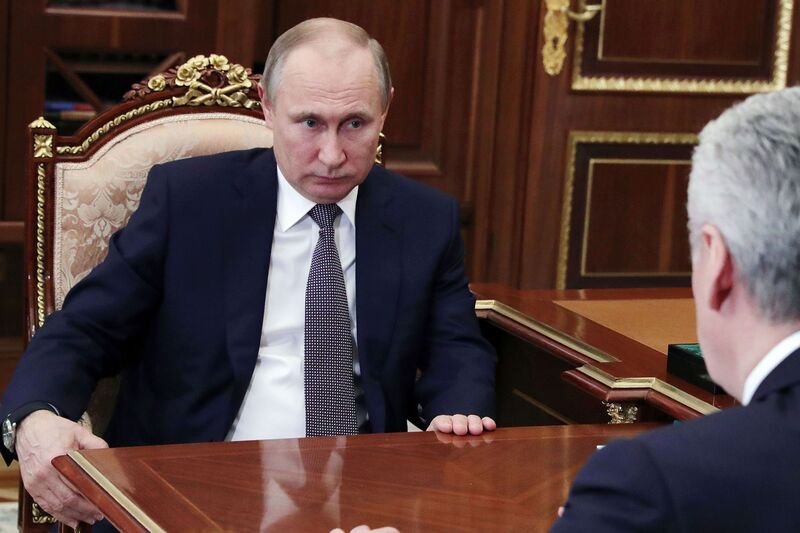 ladimir Putin in a meeting with Moscow’s Mayor Sergei Sobyanin in Moscow on April 14.

According to Bloomberg, Putin’s top military commander last month warned that Russian forces would shoot down any missiles and their launchers that threaten its personnel, fueling fears a major U.S. barrage could escalate. But the strikes, though larger than those President Donald Trump ordered a year ago, were limited to a few targets linked to Syria’s chemical-weapons program, according to U.S. officials.

"We’re not talking about a direct military conflict between Russia and the U.S.,” said Andrei Klimov, deputy chairman of the international affairs committee in the upper house of parliament in Mosow. "The Americans and their allies did everything to make sure they didn’t hit Russian units." 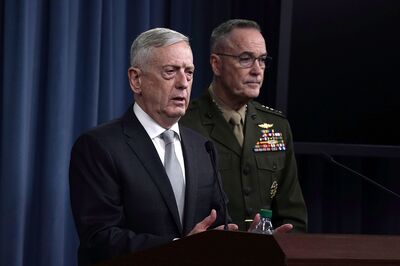 James Mattis and Joseph Dunford at the Pentagon on April 13.

General Sergei Rudskoi told reporters in the Russian capital that Syrian forces using Soviet-designed systems intercepted 71 of the 103 cruise missiles launched, including at six airfields, a claim that couldn’t be independently verified. The U.S. didn’t immediately provide an assessment of performance.

The limited scope of the brief campaign showed that Moscow’s warnings had worked, according to Klimov, the Russian senator.

"They’re cowardly political thugs," Klimov said of the U.S. administration. "They wanted to get some militaristic PR for their own political reasons but they’re scared of getting hit back."

U.S. officials said targets were chosen to minimize the risk of accidentally hitting Russian forces. The U.S. didn’t give Russia early notice of the targets but used a hotline to ensure the airspace was clear. France said Russia was warned in advance of the strikes to avoid direct confrontation. Russia has air and naval bases in Syria, but its forces are dwarfed by those of Iran, which is also fighting on behalf of Assad, and of the U.S. and its allies.

Konstantin Kosachyov, chairman of the international affairs committee in the upper house of parliament, said the strikes appeared to have been aimed at preventing an investigation of the alleged chemical-weapons attack that Washington cited as the justification. Moscow has called that incident a set-up, a contention Western governments dismiss.

But Kosachyov said Russia’s response "should be not military but legal," focused on the United Nations, RIA Novosti reported.

Anatoly Antonov, Russia’s ambassador to the U.S., said in a Facebook post the attack "would have consequences," but he didn’t elaborate. He also criticized the U.S. for "insulting" Putin, an apparent reference to Trump calling out his counterpart for his support of Syrian leader Bashar al-Assad.

"Russia will surely respond, but most likely through counter-sanctions designed to address the overall degradation of the U.S.-Russian relationship, rather than militarily against U.S. soldiers in Syria," Eurasia Group said in an emailed note. Russian could also target U.S. allies in the region with cyberattacks, the risk advisory firm said.

Elena Supponina, a Mideast specialist at the Russian Institute for Strategic Studies, which advises the Kremlin, said Moscow’s warnings about avoiding escalation had been heeded because “no red lines were crossed.”

"Ties remain tense, but there’s a faint hope that the window of opportunity for improvement hasn’t yet closed,” she said.