The road out of the European Union gets bumpier as key legislation heads to the upper house of parliament.

EghtesadOnline: The bumpy journey toward Brexit reaches another fork in the road this week as the upper chamber of the British parliament plans to rewrite a key piece of Prime Minister Theresa May's legislation.

What happens to the European Union Withdrawal Bill in the predominantly pro-EU House of Lords could lead to a smoother divorce, a showdown with the government or even a constitutional crisis. It makes planned changes by the peers more than just a perfunctory stage in the sometimes complex democratic machinery of Westminster, according to Bloomberg.

The law aims to replicate thousands of existing EU regulations so there’s no legal black hole on the day Britain’s membership ceases, currently set for March 29 next year. That process could go awry if the lords halt or, more likely, demand changes that might include delaying the exit date or increasing the chance of second public vote on the issue.

“Drama is not a word usually associated with the House of Lords,” said Tom Strathclyde, a Conservative peer who used to guide legislation through the upper house. “On this occasion, there really could be high drama.”

Already the passage of the law has been far from smooth as opponents of May’s vision for Brexit -- taking Britain out of the EU single market and customs union -- try to tear it up.

She suffered a serious defeat in the House of Commons last month at the hands of mutineers from her own Conservative party who are opposed to Brexit in its current form. She slapped down Chancellor of the Exchequer Philip Hammond last week after he said Brexit would only herald modest changes to Britain's relationship with the EU. Now more rebels are set to vent their frustration in the Lords.

The role of the unelected lords is supposed to be to revise rather than block legislation that the elected members of parliament have passed.

In the case of Brexit, a majority of lawmakers in the House of Commons also opposed it, although most cite the need to uphold the result of the referendum in 2016 that kicked off the whole Brexit process dominating U.K. politics.

The key Commons amendment last month was that parliament will now get a final vote on the Brexit deal after an agreement with the EU on the cost of the divorce and future trading relationship. The lords can start proposing more changes on Jan. 31. A list of them will be published two days later and the government will decide how to proceed.

“There is a large majority of people in the Lords who feel that Brexit is a national disaster, and we will be trying to mobilize that majority as we go through," said Dick Newby, who leads the Liberal Democrat peers.

Amendments could include a clause on having to hold a second referendum, though an earlier attempt to do so failed to gain enough support. They may also try and strike out May’s commitment to leave the EU on a specific date, allowing the U.K. more time to negotiate a deal or transition phase if necessary and let parliament have more say.

It wouldn’t be about stopping Brexit, but making sure parliament can then vote on future arrangements rather than just a binary choice of in or out, said Ros Altmann, a Conservative baroness. Sweeping new powers in the bill are “dangerous,” she said.

More broadly, the lords want to review the power of the government to implement Brexit. There’s also cross-party support for inserting the EU’s Charter of Fundamental Rights into U.K. law and lords want to clarify the length of time the European Court of Justice will be supreme to British courts in the future. 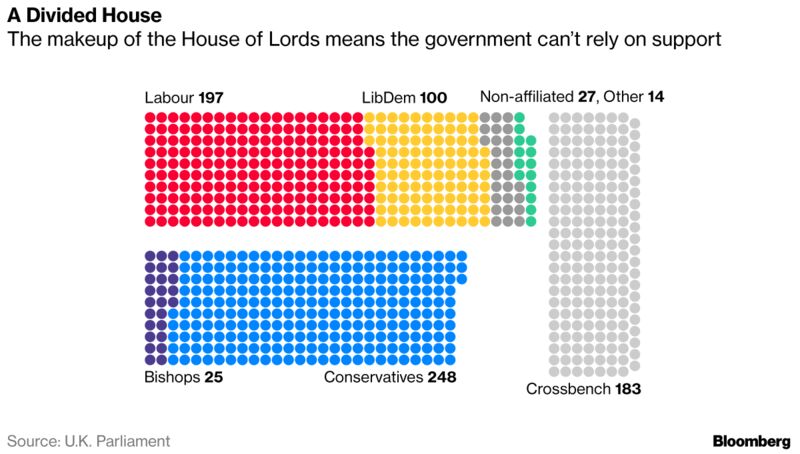 In theory, the governing Conservatives command the support of 248 lords, the opposition Labour Party has 197 and the Liberal Democrats have 100. Among the rest there are a further 110 with no party affiliation and 25 bishops.

Labour’s leader in the Lords, Angela Smith, is concerned May’s negotiations are faltering and said she will be tabling changes to the bill designed to ensure there is a smooth transition for businesses. Newby, meanwhile, said he’s confident the Conservatives would be defeated even if none of them defied the government.

Conservative peer James Arbuthnot acknowledged the constitutional issue his colleagues face and the need to not be seen interfering with the democratic “will of the people” after the 52 to 48 percent vote for Brexit. He also said it could lead to more existential threats to the lords, a perennial target in British debates over abolishing the unelected chamber.

“One-third of people voted to go, one-third voted to stay and one-third didn’t vote,” Arbuthnot said. “If the Lords don’t choose this moment to brave abolition then what really is the point of the Lords?”

Despite the dramatic rhetoric of some Europhiles, others in the pro-EU camp say it won’t lead to a great battle with the House of Lords defying the will of the Commons and voters. Strathclyde, the Conservative, said an effort to stop the Brexit legislative process all together would be “an act of suicide” for the House of Lords.

David Hannay, a so-called crossbench lawmaker with no party affiliation, instead expects the lords to vent their anger and vote through some amendments, but stop short at precipitating a fight between the two houses of parliament. He was a member of the negotiating team for the U.K.’s accession to the European bloc in 1970-72.

“The characterization of this as a great shoot-out at the O.K. Corral of constitutional confrontation is wrong,” said Hannay, who was also a senior adviser to former Prime Minister Margaret Thatcher during her negotiations for a rebate on Britain’s budgetary contributions in the 1980s.

That said, May’s government will need to fight another day.

The Lords will have another “meaningful” vote on whether to press ahead with Brexit later in the year after what Meg Russell, director of the constitution unit at University College London described as a “phony war” between the two houses of parliament. That could come when the U.K.’s long-term relationship with the EU is still unclear.

“The bigger political battle may come in the autumn when parliament will vote on whether to implement the withdrawal agreement,” said Russell. “The government will then be asking MPs and peers to vote on an uncertain prospectus.”