In a joint press briefing with Abe in Tokyo on Monday, Trump hailed the U.S.-Japan alliance even as he called for a reduction in the trade gap between the countries. Trump reeled off several possibilities, including missile-defense systems, missiles and F-35 fighter jets, Bloomberg reported.

“One of the things I think is very important is the prime minister is going to be purchasing massive amounts of military equipment, as he should,” Trump said. “It’s a lot of jobs for us and a lot of safety for Japan.”

Trump is on the first stop of a five-nation swing through Asia where he plans to push his message of fair trade and freedom in the region backed by a strong U.S. military presence. The U.S.’s $69 billion trade deficit with Japan is its second-highest behind only China, fueled largely by American imports of cars and electronics.

Despite Trump’s criticisms on trade and military equipment, no new major deals or policies were announced on his stop in Japan. Abe deflected questions on trade ties and instead focused on praising Trump for his commitment to the defense alliance.

Abe said Japan is buying Lockheed Martin Corp.’s F-35A fighter jets and missile interceptors from Raytheon Co. -- deals that had previously been announced. He said Japan would buy more Aegis equipment from the U.S. for its ships.

“With the North Korean situation becoming more severe, and the Asia-Pacific security environment becoming harsher, I think we need to improve Japan’s defense capabilities in terms of quality and quantity,” Abe said.

Abe said that economic issues would be discussed in a separate U.S.-Japan dialogue. At the same time, he advocated high-standard rules for trade throughout the region.

Those talks have largely focused on differences with currency and trade, with the U.S. pushing to lower agricultural tariffs and restrictions on American car sales in Japan. American negotiators are pushing for Japan to remove a safeguard mechanism on imports of U.S. frozen beef that have increased tariffs to 50 percent from 38.5 percent.

During the briefing with Abe, Trump said that he wanted Japan’s economy to be “second” behind the U.S. Earlier in the day, he told a gathering of business leaders that he intends to fix the imbalance in U.S.-Japan trade ties by making it easier to do business in America.

“For the last many decades, Japan has been winning. You do know that,” Trump said. “Right now our trade with Japan is not fair and it isn’t open.”

Trump laid out his complaints about how Japan treats the U.S. unfairly in his eyes, noting that few American cars are sold in Japan and making a plea for Japanese automakers to build more in the U.S.

“Try building your cars in the United States instead of shipping them over," Trump said. "Is that rude to ask?”

Abe has courted Trump’s friendship in a bid to ensure that trade tensions don’t impact a military alliance with the U.S. that ensures Japan’s security in the face of threats from North Korea and China. 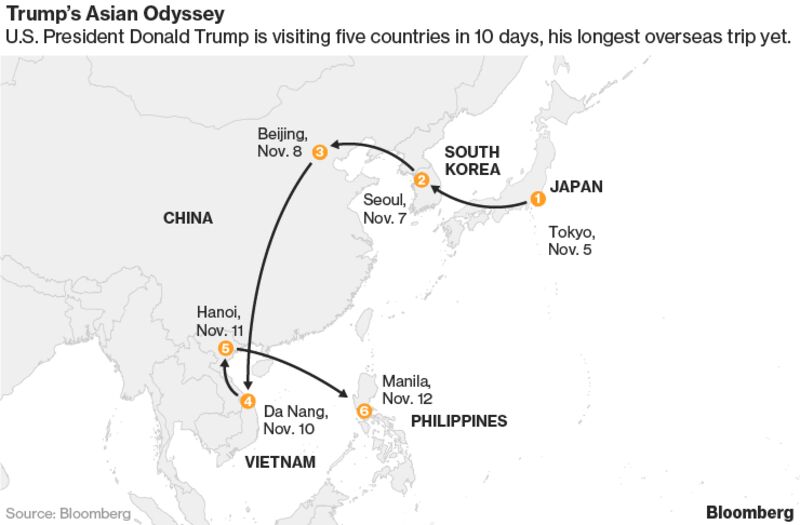 Abe has pushed back on Trump’s remarks about U.S. car sales in Japan, saying earlier this year that a lack of advertising and dealerships played a role. He has also emphasized how Japanese companies are creating jobs in the U.S.

Japan’s biggest auto trade association says that 75 percent of Japanese-brand vehicles sold in the U.S. are built in North America. Toyota Motor Corp. and Mazda Motor Corp. are pressing for an incentive package of at least $1 billion from U.S. states trying to land their planned $1.6 billion joint car factory. The shared factory the Japanese automakers plan to open in 2021 is the only new auto assembly plant to be announced since Trump became president.

That effort may be hampered by Trump’s decision on entering office to withdraw from the TPP, a 12-nation free trade agreement. Japanese officials are still stinging from the decision, and have said they’re eager to either negotiate a bilateral trade deal with the U.S. or win Trump back to the multinational agreement -- which seemed unlikely in light of Trump’s defense of his pullout from the pact.

"TPP was not the right idea,” Trump said on Monday. “I’m sure some of you in this room disagree, but ultimately I’ll be proven right."

Trump said he envisions easing trade restrictions in another way, outside the TPP framework, but offered few details beyond saying that he personally had the power to speed business deals that had been hung up in the past.

He cited the Keystone and Dakota pipelines that he been held up under the Obama administration. "In my first week, I approved both," Trump said.

Trump also took credit for recent record stock market highs and an addition 2 million workers in the workforce, saying: "I’ve reduced regulations terrifically if I do say so myself."