EghtesadOnline: North Korea said the U.S. will “pay dearly” after its United Nations Ambassador Nikki Haley said the isolated nation was “begging for war,” again ratcheting up tensions as world leaders consider a fresh round of sanctions.

Describing Haley’s comments to the UN this week as a “hysteric fit,” a commentary by the state-run Korean Central News Agency on Friday warned the U.S. of unspecified retribution. North Korea detonated its sixth and most powerful nuclear bomb on Sunday, and South Korea has said Kim Jong Un’s regime may be planning to launch another intercontinental ballistic missile on Saturday.

“The U.S. administration will have to pay a dear price for her tongue-lashing,” KCNA said of Haley’s remarks.

According to Bloomberg, President Donald Trump’s administration is pushing the UN Security Council to ban oil sales to North Korea in a fresh bid to pressure Kim. The North Korean leader is seeking the capability to strike the U.S. with a nuclear weapon, and has said he won’t negotiate unless America drops its “hostile” policies. 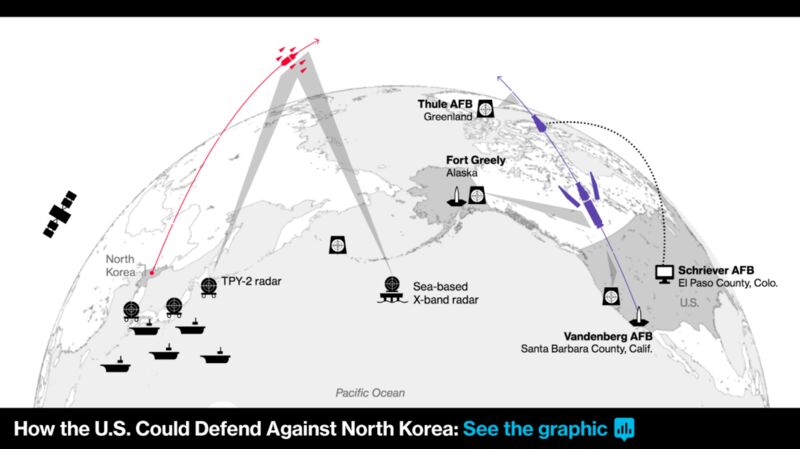 On Thursday, Trump said it wasn’t inevitable that the U.S. would end up in a war with North Korea over its nuclear weapons development, but that military action remained an option.

“I would prefer not going the route of the military, but it is something certainly that could happen,” Trump said in a press conference at the White House.

He declined to say whether he’d accept a nuclear-armed North Korea that can be successfully deterred from using such weapons. A senior administration official later told reporters that the U.S. won’t let North Korea extort or threaten the world with its nuclear program, and that the administration isn’t sure the country could be deterred.

The official said that the danger of war is rising, and that the U.S. is also concerned about North Korea exporting its nuclear technology to other nations or to terrorist groups. Any threat to the U.S. or its allies will be met with a massive military response, the official said.

“North Korea is behaving very badly, and it’s got to stop,” Trump said.

South Korean Prime Minister Lee Nak-yon on Thursday fueled speculation of an imminent launch, saying that North Korea may fire its next missile on Saturday -- the anniversary of its founding.

An analysis published Thursday by NK Pro points to little correlation between key dates in the country and its testing cycle. NK Pro is a U.S. subscription-based website that provides analysis on North Korea.

The U.S. is circulating a draft resolution at the UN that would bar crude oil shipments to North Korea, ban the nation’s exports of textiles and prohibit employment of its guest workers by other countries, according to a diplomat at the world body. The proposal also calls for freezing the assets of the North Korean leader. But China and Russia, both of which have veto power in the Security Council, have indicated resistance to imposing more sanctions.

The U.S. is willing to risk a veto of its proposal rather than see it watered down, according to a Security Council diplomat who asked not to be identified while negotiations are under way. The U.S. continues discussing the draft with other Security Council members but is still pushing for a Sept. 11 vote on the proposal.

The Trump administration also kept up efforts to persuade other governments to scale back diplomatic and economic ties with North Korea. Secretary of State Rex Tillerson raised the issue of North Korean “guest workers” in Kuwait during a meeting with the Middle Eastern country’s foreign minister in Washington on Friday. On Thursday, Mexico gave North Korea’s ambassador 72 hours to leave the country in protest over Pyongyang’s latest nuclear test.

Earlier in the week, Trump and Chinese President Xi Jinping spoke for 45 minutes as the U.S. president seeks China’s help in putting pressure on Pyongyang. While both sides released statements agreeing on the goal of eliminating nuclear weapons from the Korean Peninsula, there was no mention of next steps.