Here Are Trump Jr.’s Shifting Explanations for His Russia Meeting

EghtesadOnline: When Donald Trump Jr. was first confronted on Saturday with evidence that he met last year with a Russian lawyer, he brushed it off as merely a chat about adoptions of Russian children.

Then, on Sunday, following reports he was told the lawyer had damaging material on Hillary Clinton, he said the meeting was set up on a vague promise of information “helpful” to his father’s campaign, Bloomberg reported.

Donald Trump Jr.’s disclosure of the messages capped days of shifting and incomplete explanations of the June 2016 meeting and contradicted months of blanket denials by Trump administration officials that anyone involved with the campaign had contacts with Russians during the election or was aware of foreign attempts to influence the contest’s outcome. 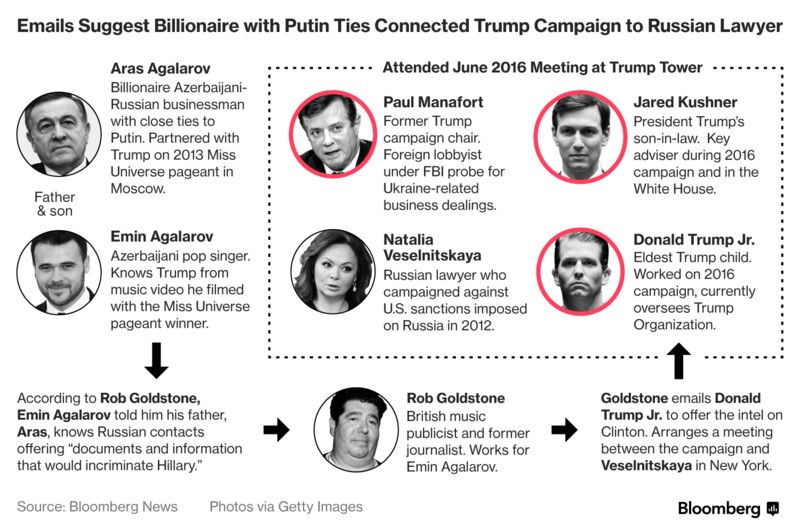 The New York Times, which first disclosed the meeting, reported that the younger Trump released images of the emails only after the newspaper contacted him to inform him it was about to publish the messages and seek a comment from him for its article.

Even as evidence piled up of the extraordinary nature of a meeting with an emissary from Russia, the younger Trump dismissed the potential legal and political peril for his President Donald Trump’s administration with tweets and statements suggesting there was nothing wrong because he never really got the opposition research he wanted.

The president issued a one-sentence statement on the episode read aloud by spokeswoman Sarah Huckabee Sanders at the White House daily press briefing: “My son is a high-quality person, and I applaud his transparency.”

The younger Trump first described the encounter as a “short introductory meeting” in which the lawyer primarily discussed the adoption of Russian children by American families, a point of diplomatic dispute between the U.S. and Russia.

“No details or supporting information was provided or even offered,” the statement said. “It quickly became clear that she had no meaningful information.”

On Monday, after the Times published another story indicating that Trump Jr. had been told the information came from the Russian government, his attorney Alan Futerfasdismissed the reporting as “much ado about nothing.” He said the younger Trump did not tell his father about the 20- to 40- minute meeting and would be willing to answer any investigative inquiry about the situation.

“Don Jr.’s takeaway from this communication was that someone had information potentially helpful to the campaign and it was coming from someone he knew,” Futerfas said. “Don Jr. had no knowledge as to what specific information, if any, would be discussed. Further, at no time was there ever any understanding or commitment that he, or anyone else, would find the information, whatever it turned out to be, to be reliable, credible or of interest, or would even survive due diligence.”

On Tuesday, Trump Jr. posted his entire email correspondence with a British music publicist who had brokered the meeting with Veselnitskaya, Rob Goldstone, on Twitter.

“The Crown prosecutor of Russia” had “offered to provide the Trump campaign with some official documents and information that would incriminate Hillary and her dealings with Russia and would be very useful to your father.

“This is obviously very high level and sensitive information but is part of Russia and its government’s support for Mr. Trump,” Goldstone said.

Trump Jr. responded, less than 20 minutes later: “Seems we have some time and if it’s what you say I love it especially later in the summer.”

On July 24, 2016, a day ahead of the start of the Democratic National Convention, Trump Jr. belittled Clinton campaign allegations that Russians had hacked Democratic email accounts as part of a plot to help his father.

“It just goes to show you their exact moral compass,” he said in an interview on CNN, accusing the Clinton campaign of lying and “doing anything to win.”

In a statement on Tuesday accompanying the emails he released, the younger Trump said: “To everyone, in order to be totally transparent, I am releasing the entire email chain of my emails with Rob Goldstone about the meeting on June 9, 2016. The information they suggested they had about Hillary Clinton I thought was Political Opposition Research.”