The Persian Gulf country's policy of trying to balance competing interests has finally caught up with it.

EghtesadOnline: When Sheikh Hamad bin Khalifa Al Thani handed the reins of power to his son in 2013, he said it was time “to turn a new page” in Qatar.

The emir's abdication, an unusual move for a Gulf ruler, was expected to mark a change of course, with his youthful successor dialing back on foreign policy positions that angered neighbors and allies by, among other things, supporting the former Muslim Brotherhood government in Egypt, according to Bloomberg.

But the father's strategy of engaging with everyone has spectacularly caught up with the world’s richest country under his son, Sheikh Tamim bin Hamad, with the Saudi-led isolation of Qatar is in its fifth week and showing no sign of ending. The Saudis say that's because nothing has really changed, and it's the older man who still pulls the strings.

“Sheikh Tamim is paying the price of keeping his father’s policies even though he gave the impression he will reposition Qatar,” said Sami Nader, head of the Beirut-based Levant Institute for Strategic Affairs. “The crisis has shown that the policies of the father are still very well entrenched.”

That belief was reflected in the Saudi media, which accompanied stories on Qatar with a composite photo of Sheikh Hamad, 65, and his son, 37. In Qatar, being pictured together is used to show respect for the ruling family. In Saudi Arabia, it reinforced the perception that Father Emir, as the elder sheikh is known, is still the power behind the throne.

As Saudi columnist Hussein Shobokshi wrote in Saudi Gazette last month, “Tamim is handcuffed by the father.” The emir is under “severe pressure” to impose policies to mirror the previous regime so his rule “becomes monstrous and a copy of his father’s already hated” reign, he added.

Other Saudi-owned media sought to highlight claims that Qatar was trying to undermine the region. They have been playing an audio tape, believed to be from 2003, in which Sheikh Hamad allegedly told the late Libyan leader Muammar Al Qaddafi that if the Americans succeed in Iraq "Saudi Arabia will come next" and that Qatar supports a number of broadcasters that attack Saudi Arabia.

Sheikh Hamad has kept a low profile since he abdicated, attending charity and social events but rarely speaking in public.

Except for praying with his son at the end of the Ramadan fast last month, he hasn't made any public appearances since Saudi Arabia, the United Arab Emirates, Bahrain and Egypt cut diplomatic ties and trade links with Qatar on June 5. He recently suffered a fracture in his leg that required a simple surgical procedure, according to another son, Sheikh Joaan bin Hamad Al Thani. He posted a couple of pictures of his father in what appears to be a hospital bed, one of them with a smiling Sheikh Tamim by his side.

The media campaign against Qatar has been orchestrated from the top, Qatar’s ambassador to Russia, Fahad bin Mohammed Al-Attiya, said in an opinion piece in the New York Times last week.

“Today, the talk shows and social media platforms of the state-supported media in Egypt, Saudi Arabia and the Emirates do their masters’ bidding and call for regime change in Qatar,” he said. “Senior Qatari officials have been subjected to character assassinations and insults.”

The Saudi-led bloc has said Qatar, the world’s largest exporter of liquefied natural gas, of destabilizing the Middle East by supporting proxies of Shiite Muslim Iran and Sunni militants of al-Qaeda and Islamic State, accusations the sheikdom has denied.

But the beef runs deeper into the internal family workings of how Qatar is run, ultimately making it harder to predict how it might end. Qatar made “secret agreements” with some of its neighbors barring support for opposition and hostile groups, CNN reported on Monday, citing copies of the accords it obtained exclusively. They date back to when Sheikh Tamim took over.

The tension really goes back to June 1995, however, when Sheikh Hamad, who was crown prince at the time, replaced his father in a bloodless palace coup. Recognizing the possibilities of Qatar’s vast natural gas resources, the emir embarked on reforms, investments and moves to empower a peninsula whose only land border is with Saudi Arabia.

The Qataris “don’t have the land mass, they don’t have the military, they’re geographically located in this extremely contentious neighborhood, so they have to balance between the greater powers around them,” said Emily Hawthorne, Middle East and North Africa analyst at Texas-based advisory firm Stratfor. 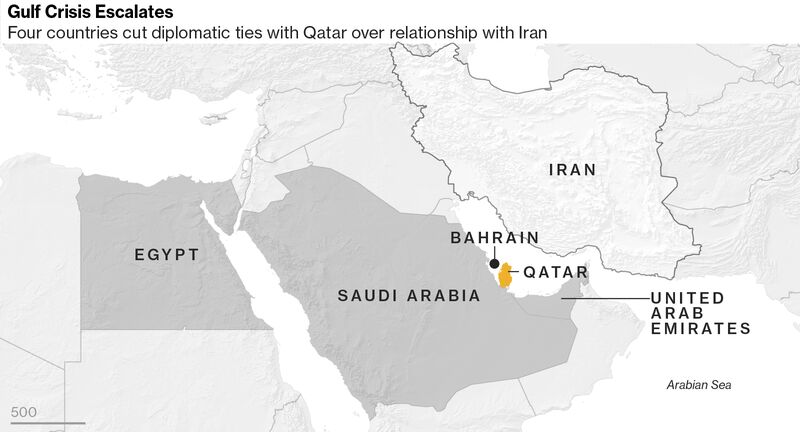 Income from the giant gas field shared with Iran allowed Qatar to invest in companies like Barclays Plc and Volkswagen AG and buy iconic buildings in London. It paid for developing the capital Doha into a modern metropolis and establish campuses of elite U.S. universities. It also opened Al Jazeera, a pan-Arab television station that has enraged Arab and Gulf leaders.

By the time Sheikh Tamim took over, Qatar’s per-capita income had swelled toward $130,000, almost twice that of Saudi Arabia, and it had been awarded the right to host the 2022 soccer World Cup.

Politically, Sheikh Hamad established relations with everyone, including Saudi foe Iran and the Lebanese Shiite group Hezbollah, and Sunni Islamists such as Hamas. Israel even opened a trade office in the mid-1990s in a two-story villa in a quiet street in Doha, but was later forced to close it in 2000 under pressure from Iran and Saudi Arabia.

One episode, in June 2008, summed up how the Qataris worked. U.S. Treasury Secretary Henry Paulson visited the country to drum up investment as the financial crisis took hold. On the same day, the Gulf nation decided to allow an Iranian bank to expand.

The problem was that the Americans had wanted to shut the bank all together and suspected the Iranians were keen to get more than just a second branch and establish another financial institution in Qatar.

It showed how “in classic Qatari fashion” Hamad tried to balance competing interests and “such behavior does not satisfy either the U.S. or Iran,” Joseph LeBaron, the American ambassador at the time, wrote the following year in a cable released by Wikileaks.

The approach then broadened. While Dubai was emerging as a financial and commercial hub, Qatar wanted to distinguish itself as a diplomatic hub, “a clearing house of the world that can solve problems,” said Paul Salem, vice president of the Middle East Institute in Washington.

There were some successes. The Doha agreement reached by rival Lebanese factions in 2008 marked the end of an 18-month crisis in Lebanon. The 2011 Darfur agreement over Sudan was finalized in Doha. Qatar later helped secure the release of Greek Orthodox nuns held by an al-Qaeda affiliate in Syria in 2014. It has also hosted talks between the Taliban and the Afghan government.

But in between those times, Qatar strayed out of line with the rest of the Gulf. When the Arab Spring began in 2011, it financially supported Egypt under its Muslim Brotherhood president, Mohamed Mursi. While it denied funding the group itself -- it’s banned in Saudi Arabia and the U.A.E. -- the aid caused antagonism.

“They established good relations, exceptionally, with everyone -- Iran, Israel, Taliban, America, Russia -- that was part of their old brand,” said Salem. “Then it turned from a global brand that’s friends with everybody to a much more partisan position.”

Within a year of becoming emir, Sheikh Tamim had seen three neighboring countries withdraw ambassadors over Qatar’s foreign policy, a hostile Egyptian government accused the emirate of giving sanctuary to the opposition and the Syrian rebels it backed get driven back by President Bashar al-Assad’s forces.

As Sheikh Hamad bin Jassim bin Jabr Al Thani, a former prime minister under Father Emir, put it in an interview with Charlie Rose aired in May 2014: “What’s happened in Qatar is the power has been moved to the son while the father is strong.”

The question is whether that strength has endured. Nobody really knows the extent of his involvement, if any, though he remains respected in Qatar, said Hawthorne at Stratfor. “He is such a patriarchal figure,” she said. “He’s going to be a steady presence in the background. As long as he’s living, he will be an influential presence in Qatar.”