This Is What Putin Wants From His Syria Deal With Trump

EghtesadOnline: Russia is hoping that the “breakthrough” Syrian ceasefire deal it brokered this week will align the U.S. with President Vladimir Putin’s plans for the war-torn country.

Details of the agreement reached between Putin and President Donald Trump on Friday to create a so-called de-escalation zone in southwestern Syria remain under negotiation. But skepticism abounds as to whether this plan to end a war that has claimed an estimated 470,000 lives can succeed where others failed.

Yet something has changed, as U.S. Secretary of State Rex Tillerson said in his comments on the deal, which starts with a preliminary cease-fire in areas along the Jordanian border on Sunday, Bloomberg reported.

Describing the deal with the U.S. as a breakthrough, Putin said in a press conference in Hamburg on Saturday the agreement should become a prototype for a series of zones across Syria that would be administered in co-ordination with the government in Damascus.

“If we succeed in doing this, we will create an undoubtedly good base and the prerequisites for a political solution in Syria in general,” he said.

Although Putin and all sides are formally committed to Syria’s territorial unity, the plan would temporarily lead to something akin to Germany after World War II, when the four allied powers divided the country into four administrative zones, according to Fyodor Lukyanov, who heads Russia’s Council on Foreign and Defense Policy.

“This is the beginning of the soft-partition of Syria,’’ he said. “De-escalation is a euphemism for zones of responsibility, where the different sides will agree which power is responsible for which part of the country.’’

The outlines of the Russian proposal approved in Friday’s meeting between Trump and Putin were borrowed from ongoing talks to create de-escalization areas in other parts of the country, between Iran, Russia and Turkey, said Lukyanov. 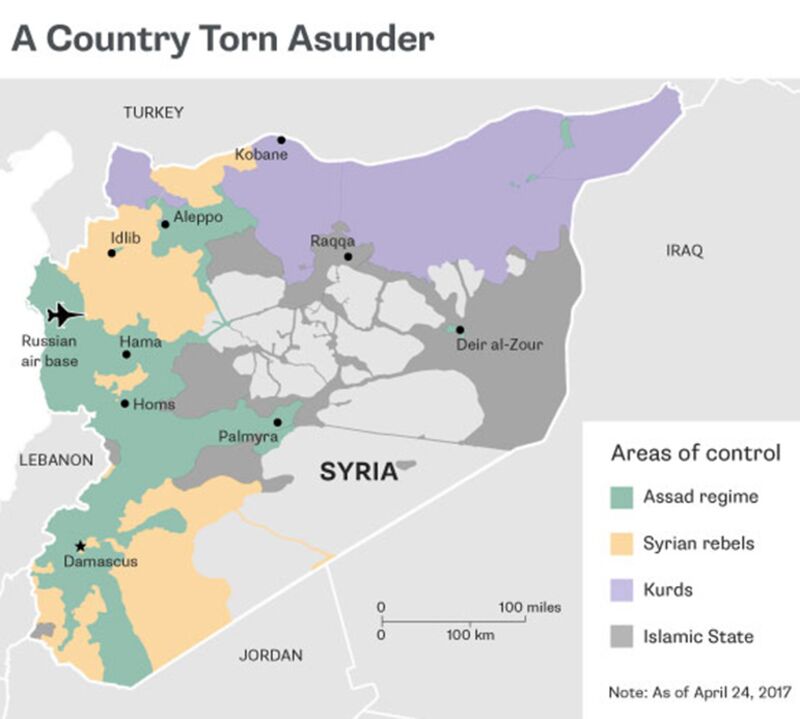 Taken together, the two sets of plans represent the Russian military’s strategy for exiting the conflict, said Lukyanov. They also show how the situation on the ground has transformed over the last year. Syria’s second city, Aleppo, fell back under regime control and the U.S.-led campaign to drive Islamic State from its self-declared caliphate advanced dramatically.

That has left the U.S. with a decision to make on what to do once Islamic State is defeated. It can wrestle with Iran, Russia and Syrian President Bashar al-Assad for control of recaptured areas of Syria. Or it can declare mission accomplished, agree to oversee the security of zones near the borders with its core allies, Israel and Jordan, and leave most of Syria to Assad, said Joshua Landis, director of the Center for Middle East Studies at the University of Oklahoma.

“Assad is going to retake most of Syria, and there is nothing the U.S. can do about it,’’ said Landis. "There is a new security architecture being imposed in the Middle East and Iran is the beneficiary."

The U.S. sees the de-escalation proposals in much more modest terms, according to a senior State Department official, with the goal being to freeze the fighting and allow space for a political settlement. “There’s the sense that both parties feel like the other needs to be involved,” he said of the U.S. and Russia.

Tillerson said clearly in his remarks after the Trump-Putin meeting that the Syria deal was a starting point for a wider cooperation with Russia after Islamic State’s defeat. The issue then, he said, would be to de-conflict other areas of the country.

“By and large, our objectives are exactly the same. How we get there, we each have a view,’’ Tillerson said. “Maybe they’ve got the right approach and we’ve got the wrong approach.’’ He did not elaborate.

The agreement could fall apart quickly. The same array of forces who aren’t party to the deal – including Assad’s forces, Iranian-led militias and al-Qaeda-linked rebels - exist on the ground in Southern Syria as well in the North, where a cease-fire crafted by the Russians and the Americans last year collapsed within two weeks.

In addition, so far the only monitors on offer to police the de-escalation zone are Russian. How others might become involved and in what capacity is under negotiation, the State Department official said. The Russian view of how the zones will work is also minimalist and favorable to the Assad regime.

Russia would provide a maximum of 1,000 military police to monitor the cease-fire, according to Elena Suponina, a Middle East expert at the Russian Institute of Strategic Studies, which advises the Kremlin. She said the de-escalation zones had been under discussion for months, and timed for announcement by Trump and Putin at this week’s G-20.

They were not equivalent to the safe havens often discussed in the West, where one of the warring parties is forced to leave. Assad’s forces would not be excluded from the de-escalation zones being discussed and would be allowed to conduct operations against “terrorists,’’ she said. That is the description the Assad regime uses for all armed opposition.

Moreover, said Suponina, the zones would be attempted only where the rebel opposition is “too weak to launch an offensive, but strong enough not to be wiped out.’’

Those low Russian ambitions may also fuel suspicion that they are offering only the semblance of a peace plan to placate the new U.S. president and buy time to finish up the reconquest of Syria.

“I have no doubt what the Russians want to do with all these zones is to try to solidify Assad’s position,’’ said Fred Hof, who served as special adviser for Syria’s transition during the Obama administration. “The key question here is what kind of influence is Russia willing to bring to bear on the regime and on the Iranians to keep them quiet?”

Equally important will be the willingness of the new U.S. administration to accept the emerging status quo in Syria that Russia is trying to solidify.

“For Trump,” said Lukyanov, “it is at least possible now to say that the Russians respect us there, we are protecting our friends and interests, and ISIS is being defeated.’’