EghtesadOnline: When she called a snap election in April, Theresa May said she needed voters’ backing to silence rivals in Parliament who were trying to frustrate her plans for Brexit.

Instead, the British prime minister’s electoral humiliation seven weeks later weakened her and emboldened not just opposition parties, but members of her own Conservative government leery of her Brexit strategy.

Exactly a year since voters unexpectedly chose to quit the EU, pro-Europeans now sense a chance to block May’s plans for a so-called hard Brexit and potentially keep Britain inside the single market and tariff-free customs union. The biggest challenge may come from within the House of Lords, whose opposition was a key reason for May’s election call, according to Bloomberg.

“We’ve had a general election where Theresa May has effectively lost her mandate for an extreme Brexit,” Keir Starmer, the main opposition Labour Party’s Brexit spokesman, told Bloomberg Television on Thursday. “There is going to be increased pressure for the government to change, to put options back on the table.”

Heading an untested minority government, May now faces a battle to pass any of the Brexit laws announced this week and which were already diluted from what she planned before the election. The timing could hardly be worse as the government just this week opened formal negotiations with the EU.

May’s woes stem from a single fact: She lost the majority in the elected House of Commons that her Conservatives had before she called an election explicitly to win support for her Brexit plan. She’d proposed a hard departure -- leaving the EU’s single market and customs union and so prioritizing control of immigration over safeguarding the economy.

Voters refused to give May the endorsement she wanted, leaving her with fewer Tory lawmakers and denying her the power to govern Britain without support from other parties. 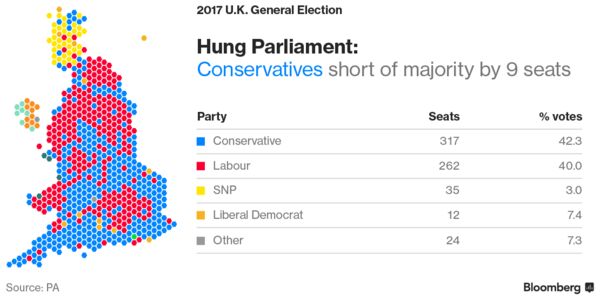 Even if she manages to stitch together a deal with Northern Ireland’s Democratic Unionist Party to give her a working majority, opposition parties are already threatening to amend legislation scheduled for debate next week. The Liberal Democrats fired their first salvo Thursday, tabling an amendment that seeks to keep Britain in both the single market and customs union.

May also faces an uprising within her ranks bigger than the pro-EU element she ran roughshod over before the election. Once a candidate for the chop, Chancellor of the Exchequer Philip Hammond is publicly flexing his muscles with calls for a "jobs first"Brexit. Home Secretary Amber Rudd is also viewed as being sympathetic to that approach.

Yet conceding too much ground to the soft Brexit camp risks incurring the wrath of Tory euroskeptics who remain a potent force. They warn May against reinterpreting the Brexit result, and that in voting Tory or Labour on June 8 more than 80 percent of the electorate supported a party committed to leaving the single market.

“May said an increased majority would strengthen her hand, so now her minority party has to listen to many factions both within and outside,” said Lucy Thomas, who worked on the campaign to remain in the EU and is now head of Brexit advice at communications consultancy Edelman. “It will be a delicate balancing act.”

A YouGov opinion poll for The Times on Friday revealed the shifting opinion May must adapt to. Not only was Labour leader Jeremy Corbyn regarded as better prime ministerial material than her for the first time, but 58 percent of respondents favored prioritizing trade over immigration, up from 53 percent a year ago.

The House of Commons aside, May will still face a struggle in the House of Lords.

Draft laws generally start their progress in the Commons and -- when they have been approved -- then pass to the Lords, the upper house of Parliament where the Tories have no majority. Bills must pass both houses to become law.

Back in April, May told voters that beating opponents of Brexit -- including those in the “unelected” Lords -- was the key reason for calling the election in the first place. May based her gamble on a British constitutional understanding -- known as the Salisbury Convention.

Under this, Lords agree not to block measures that a majority of elected members of Parliament in the Commons support, when those laws have been outlined first in the governing party’s election manifesto.

The premier’s allies now privately admit that her opponents in the Lords feel they don’t need to bow to the will of the elected chamber. With a minority government, pro-Europeans in the upper house think they can ignore the Salisbury rule.

Because of the election result, “the Salisbury Convention probably doesn’t apply,” said Dick Newby, leader of the pro-EU Liberal Democrat party in the upper house. Among peers “there’s a large majority that think Brexit is a bad idea,” and so they “could make Theresa May’s Brexit plans more difficult, because one of the things the Lords have is the power of delay, which of course is quite a big power at this point.”

The dilemma for May is that she doesn’t have much time given Britain will leave the EU on March 29, 2019. By then, she must try to negotiate an exit deal and Parliament must pass the necessary bills to convert thousands of pieces of EU legislation into British law.

May would be better placed to clear the hurdles before her if she hadn’t lost key personnel. The day after her election debacle, her two chiefs of staff and long-time advisers Nick Timothy and Fiona Hill resigned. The head and deputy head of her policy unit followed them out of the door.

Arguably the biggest blow to her battle with Parliament, however, was the resignation of George Bridges, the Brexit minister in charge of her policy in the House of Lords.

Bridges, 46, was regarded as a highly effective minister, popular with allies and opponents and highly rated inside the government for his ability to navigate the quirky politics of the upper chamber.

According to a person familiar with his thinking, Bridges, who has a young family, didn’t want to spend the next two years fighting what could become an impossible battle to win.

Voters rejected May’s explicit request for a bigger mandate to stop the Lords trying to “meddle” with her plans, said Steve Peers, a professor at the University of Essex. “The voters answered: ‘No.’ In the circumstances, if the Lords block any government Brexit bills, they would not be frustrating the popular vote -- but rather giving effect to it.”