Google and Facebook Join Cities in Challenging Trump on Climate

EghtesadOnline: Alphabet Inc.’s Google, Microsoft Corp. and Facebook Inc. are among dozens of companies that pledged their support for policies combating climate change following President Donald Trump’s decision to withdraw from the Paris accord.

The “We Are Still In” coalition also features nine states, including California and New York, scores of universities, and leaders of 125 cities from Los Angeles to Chicago, according to a statement released Monday. 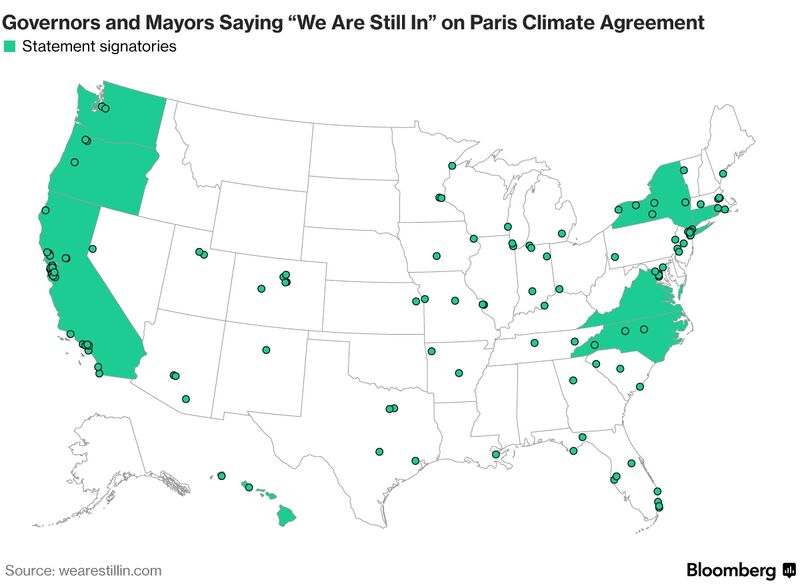 The initiative is an attempt to coordinate the widespread backlash to Trump’s withdrawal from the landmark environmental agreement. Many of the companies and politicians who signed up have been advocating for months for the U.S. to uphold its climate change commitments. The statement is intended to demonstrate to other nations that U.S. businesses and local governments remain on board, no matter what the president does, according to Bloomberg.

“We remain steadfastly committed to the sustainability, carbon and energy goals that we have set as a company and to the Paris Agreement’s ultimate success,” Microsoft President Brad Smith said in the statement.

Former New York City Mayor Mike Bloomberg, founder and majority owner of Bloomberg LP, submitted a letter Monday to UN Secretary General Antonio Guterres, expressing support for the Paris accord on behalf of the group. Bloomberg also plans to work with cities, states and businesses to set a collective emissions-cutting goal to submit to the UN as “America’s Pledge” under the Paris accord.

Trump, who has called climate change a “hoax,” campaigned on the pledge to exit the 2015 pact, saying it damaged America’s economic competitiveness. Last week, he announced his intention to withdraw, saying the deal favors other nations at the expense of American workers.

In response, the governors of New York, California and Washington state announced plans to form a coalition to fight global warming and more have since signed up. Dozens of mayors from cities including Boston, Seattle and Cleveland vowed to do the same.

The Paris accord is broader than any previous climate agreement. It calls for nations to voluntarily reduce carbon dioxide emissions in hopes of limiting global warming to 2 degrees Celsius (3.6 degrees Fahrenheit) above temperatures at the outset of the Industrial Revolution.