May Spars With Corbyn on Terrorism as U.K. Vote Nears Climax

EghtesadOnline: U.K. opposition Labour leader Jeremy Corbyn traded blows with Prime Minister Theresa May over who has the worst record on countering terrorism, as Britain’s battle with jihadists looked set to dominate the final three days of the election campaign.

Saturday night’s London Bridge attack, which was claimed by Islamic State, temporarily halted campaigning. But the political truce lasted less than a day as Labour and May’s Conservatives tore up any notion of entente and swapped barbs following the third deadly terrorist attack in Britain in three months, according to Bloomberg. 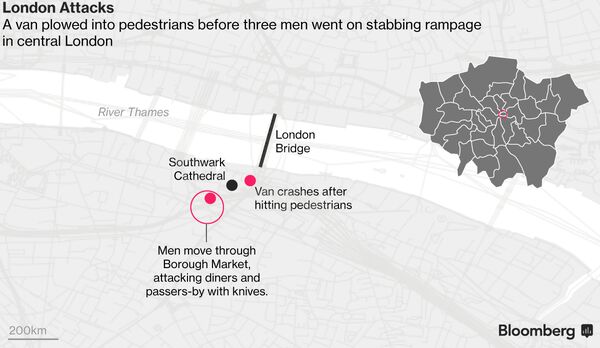 “On Thursday there’s a very clear choice: Do you want Theresa May in Downing Street, who’s prepared to give the police what they need, or Jeremy Corbyn who has voted against those powers,” Culture Secretary Karen Bradley said on the BBC.

On Sunday, May outlined a far-reaching plan for tackling extremism -- in comments Labour said were politically loaded -- before Corbyn criticized the prime minister’s record of overseeing cuts to police numbers and for failing to stop the foreign financing of terrorism.

“You cannot protect the public on the cheap,” Corbyn said in a speech in Carlisle, northern England. “The police and security services must get the resources they need, not 20,000 police cuts. Theresa May was warned by the Police Federation, but she accused them of ‘crying wolf.’”

The Labour leader accused May of covering up a report on foreign support for extremism, and was joined in his criticism by the leaders of other opposition parties. Corbyn said her proposal to respond to the terror threat by having “difficult conversations” must start with tackling Saudi Arabia and other Gulf states that “have funded and fueled extremist ideology.”

The Tories hit back within an hour. Security minister Ben Wallace accused Corbyn of “hastily” arranging his speech in order to “run from his record on counter-terrorism,” which he said included giving “cover” to Irish republican groups when they “bombed and shot our citizens” before a peace deal was reached in Northern Ireland 20 years ago.

May was holding another emergency meeting of security officials and ministers at 8:30 a.m. on Monday.

The prime minister called early elections for June 8 arguing that she needed an increased majority to strengthen her hand during the coming negotiations on leaving the European Union. Her 20-point lead has shrunk as the vote neared, dragging down sterling. The pound weakened further on Monday.

Even before London followed Manchester as the scene of the U.K.’s second terror attack in two weeks, her Conservatives were shining a light on Corbyn’s past relationship with extremist groups. On a BBC election special on Friday, Corbyn faced repeated questions from the audience about his closeness to Irish republican terrorist groups.

On Sunday morning, May gave a statement outside her official Downing Street residence in which she set out a series of policy measures she said will be needed to deal with a new type of terror threat. Her accusation that people “across society” are reluctant to confront terrorism went further still.

“There is, to be frank, far too much tolerance of extremism in our country,” she said. “So we need to become far more robust in identifying it and stamping it out -- across the public sector and across society. That will require some difficult and often embarrassing conversations.”

The Conservative Party declined to expand on what the prime minister meant by this. One explanation is that May was voicing a frustration held from her six years as home secretary under David Cameron, when she was unable to bring forward counter-extremism legislation.

Another is that May, who spent Saturday evening at a campaign event in north London with thousands of Hindus -- telling them they were “a shining example of how a community can integrate successfully and embrace British values” -- might feel there is a specific problem with Muslim integration.

May is also most comfortable when talking about counter-extremism. On foreign trips, such as to the Group of Seven summit, it has been the subject she has preferred to focus on. U.S. President Donald Trump, who criticized London’s mayor immediately after the attack, said on Sunday night that he spoke with May and pledged “to protect the United States and its allies from a vile enemy that has waged war on innocent life.”

“It could be that the reason she went into so much detail is simply that it was the third attack in three months, and the debate had to move on,” said Matthew Goodwin, professor of politics at Kent University.

But her message also chimed with one her party has been pushing relentlessly about her opponent -- and this is how some of Corbyn’s supporters certainly saw it.

The most-viewed video on the Tories’ Facebook page is one attacking Corbyn as soft on terror. Captioned “On June 9 this man could be prime minister,” it shows a series of clips from Corbyn’s past in which he advocated cutting the military, eliminating nuclear weapons and abolishing NATO, called Hamas and Hezbollah his “friends,” and was reluctant to condemn the Irish Republican Army. The video has been viewed 5.9 million times.

May’s experience cuts both ways: as home secretary from 2010 to 2016, she must bear some responsibility if the U.K. isn’t fighting extremism properly. Police numbers have been squeezed by austerity policies, even as the government says funding for counter-terrorism police has gone up. Bradley repeatedly declined to say in an interview with ITV whether there were more armed police on the streets today than in 2010.

terrorism Theresa May Jeremy Corbyn UK elections terrorism UK elections such as to the Group of Seven summit it has been the subject she has preferred to focus on. U.S. Pres who criticized London’s mayor immediately after the attack said on Sunday night that he spoke with May and pledged “to prot and the debate had to move on professor of politics at Kent University. But her message also eliminating nuclear weapons and abolishing NATO called Hamas and Hezbollah his “friends every day. Get our newsletter daily. Enter your email Sign Up she must bear some responsibility if the U.K. isn’t fighting ext even as the government says funding for counter-terrorism police while a May 30-31 YouGov survey for the Times found 40 percent o compared with 20 percent who chose Labour. “Corbyn represents a