EghtesadOnline: European Union governments threw down the gauntlet to the U.K. ahead of Brexit talks, listing demands Prime Minister Theresa May must satisfy before they will discuss the trade deal she wants and urging her to be more realistic in her expectations.

Any doubts about the scale of the task facing Britain in withdrawing from the EU after four decades were laid to rest at a Brussels summit of the region’s leaders on Saturday. A tough negotiating stance was endorsed unanimously, within minutes and to applause. The U.K. responded by saying it’s bracing for a confrontation.

According to Bloomberg, the complexity comes down to the fact that a departure from the world’s biggest trading bloc has never been done and was never supposed to happen. The EU is striving to ensure the U.K. is worse off outside it than inside, not least to avoid setting a precedent. After agreeing to the terms of separation, then it’s a matter of getting down to the business of what a future relationship might look like.

“Nobody has united here against the U.K.,” German Chancellor Angela Merkel told reporters as she left the meeting. “The British people have made a decision, which we will have to respect. But we remaining 27 now get together in order to speak with one voice.”

The Brexit discussions will begin soon after the U.K.’s June election, which May called in part to strengthen her mandate going into talks. The first orders of business, according to the EU, will be guaranteeing the rights of 3 million EU citizens living in Britain and calculating a financial settlement one leader said would be at least 40 billion euros ($44 billion). Only once “sufficient progress’’ is made on those thorny topics and reinforcing the border between the two Irelands will the EU’s attention turn to trade. That looks unlikely to happen before December.

May stuck to her guns on Sunday by arguing payments to the EU should be negotiated at the same time as future trade and that a "comprehensive" deal could be struck by the time of Brexit.

“I want to ensure that we agree on a trade deal and our withdrawal arrangements so that we know what both of those are when we leave the European Union,” she said on the BBC. “I’m confident we can get a deal."

Seeking to present a united stance in contrast to what they perceive to be muddled thinking and unrealistic ambitions on the British side, Merkel and her counterparts entered the European Council’s headquarters in Brussels declaring they stood as one. The message to Britain is that it’s they, not London, in control of what Brexit will look like.

“The U.K. is being confronted with reality now," Luxembourg Prime Minister Xavier Bettel, who estimated the bill for checking out would be between 40 billion and 60 billion euros, said in an interview. The British “can’t get any more favors than a nation that isn’t in the EU,” he said. “The fact remains that it was their decision to leave the EU.” 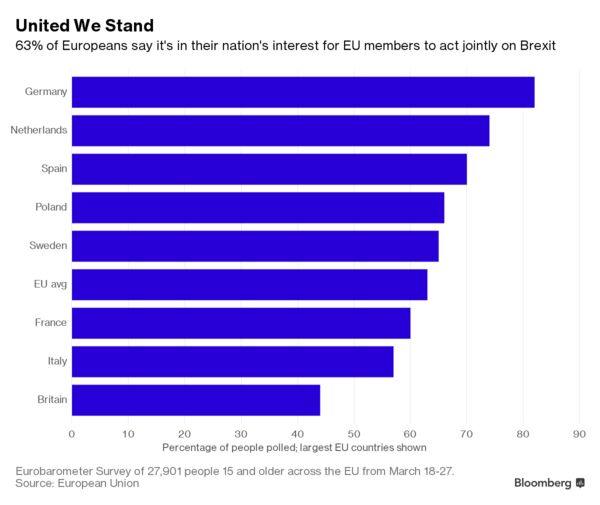 European Commission President Jean-Claude Juncker suggested the U.K. government might not actually know that. He recalled that when he dined with May last Wednesday, he detected a feeling that Britain’s future deal with the EU could still be discussed in parallel with arranging the divorce.

“That won’t happen,’’ said Juncker. He added later: “I sometimes have the impression that our British friends underestimate the technical difficulties we have to face.’’

Responding to the summit’s decisions, British Brexit Secretary David Davis acknowledged the pending talks would be tough, complex and likely confrontational. As May has repeatedly done, he used the EU’s stance to argue voters should back their Conservative Party when they go to the polls on June 8 rather than the opposition Labour Party.

“Both sides are clear -- we want these negotiations to be conducted in the spirit of goodwill, sincere cooperation and with the aim of establishing a close partnership between the UK and the EU going forward,’’ Davis said. “There are already people in Europe who oppose these aims and people at home trying to undermine them.’’

The guidelines rubber-stamped on Saturday have been repeatedly toughened over the past four weeks as the EU tries to make an example of Britain.

The final version demands the U.K. pay a bill that reflects what its already committed to the bloc’s accounts, including contributions through the end of 2020 when the current budget period ends. Juncker said it may be enough for the two sides to agree how to work out the bill and come up with a final sum later.

The EU also wants the British to agree to guarantee rights for European nationals living in the U.K. and eventually the right to remain there, including even those who arrive on the eve of Brexit.

The strategy also throws doubt over how soon any trade deal can be completed despite May maintaining one could be lined up before Britain’s March 2019 exit. While she has suggested finance be included in any pact, the guidelines imply that would only be possible if the U.K. agrees to let the EU have continued regulatory oversight over banking.

The EU sees room for transitional arrangements to smooth the exit and grant businesses time to prepare for the terms of the new relationship. But it also says the U.K. would have to agree to accept its regulatory, legal and financial rules for the duration of it.

Such demands explain why May would like to discuss trade in concert so she can show her voters she is getting them something from the breakup they voted for last June. Even then, every EU member must agree to move on to trade and EU negotiator Michel Barnier said the target for that is the end of this year, likely meaning a Dec. 14 summit.

That would leave only around 12 months to work on a pact for tariff-free commerce in the knowledge it took Canada and the EU seven years to strike its recent accord.

Changing the guidelines and advancing the talks to the stage of trade negotiations both require unanimity, meaning that Britain can’t rely on friendlier governments for swift progress. The rules also allow any country to stall negotiations should they choose to do so.

So unless all 27 leaders agree to an extension of talks, the U.K. will leave the EU in 2019 whether it has reached a deal or not. That gives the EU the leverage it needs on the assumption such a scenario would hurt Britain more.

“We now have unanimous support from all the 27 member states and the EU institutions, giving us a strong political mandate for these negotiations,” EU President Donald Tusk said. Juncker, meanwhile, conceded cracks may emerge in the EU’s front at some point. “The negotiations will be difficult and it will even be difficult to retain the unity that we were able to have today,” he said.