Macron, Le Pen in French Runoff as Establishment Crashes Out

EghtesadOnline: Centrist Emmanuel Macron and far-right nationalist Marine Le Pen won the first round of the French presidential election, triggering a runoff on May 7 between two radically different visions of the country’s future.

Macron, a first-time candidate and political independent, was on course to take 23.9 percent in Sunday’s election, with National Front leader Le Pen on 21.4 percent, according to projections from the Interior Ministry based on 97 percent of votes counted. A snap poll released late Sunday suggested Macron would defeat Le Pen by more than 20 percentage points in the second round, Bloomberg reported.

The result means that for the first time in modern French political history, both establishment parties were eliminated in the first round. Republican Francois Fillon conceded within less than an hour of polls closing after placing third with a projected 19.9 percent, while Socialist Benoit Hamon trailed in fifth place with just 6.4 percent. Communist-backed Jean-Luc Melenchon was on 19.6 percent and refused to concede.

The euro jumped on the result, soaring as much as 2 percent in early Asian trading on Monday to touch the highest level since November, before paring some of those gains. It traded 1.1 percent higher against the dollar at 10:01 a.m. in Tokyo.

The outcome is a vindication for pollsters who successfully predicted the top two slots. It still represents an earthquake that will reshape French and potentially European politics for years to come. The rejection of the two main parties reflects the anger coursing through a society traumatized by Islamic terrorism and buffeted by years of sub-par economic growth and high unemployment. A victory for Le Pen would bring that discontent to a head.

“This is more than a French election,” Dominique Reynie, a professor of political science at the Sciences Po institute in Paris, said before the result. “Given its ramifications, it’s more a European or even a global election.” 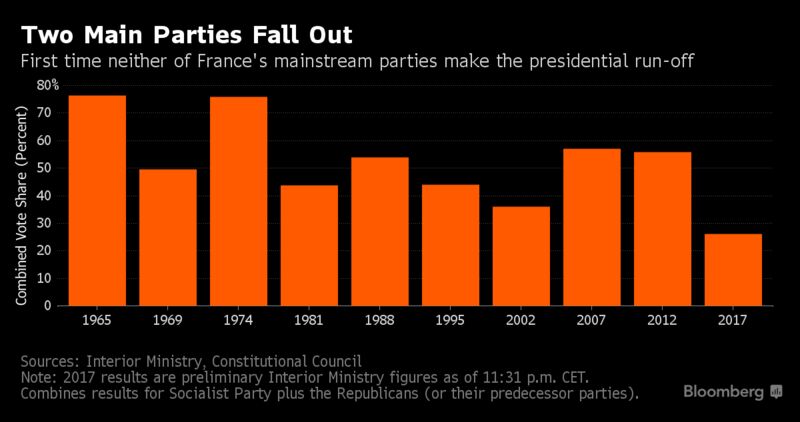 The odds are that France won’t ultimately produce a result as dramatic as Donald Trump’s victory in the U.S. in November or Britain’s decision to leave the European Union. What’s more, whoever wins will face a challenge to implement their agenda. France will hold parliamentary elections in June and neither Macron’s En Marche! movement nor the National Front are expected to come close to a majority in the legislature still dominated by the traditional parties.

Macron, 39, quickly picked up endorsements, with Fillon joining his Socialist rival Hamon and Prime Minister Bernard Cazeneuve in backing him against Le Pen in two weeks’ time. Belgian Prime Minister Charles Michel wished Macron all the best for the second round, while German Chancellor Angela Merkel’s chief spokesman, Steffen Seibert, welcomed his success on a platform that included “a course for a strong EU.”

“In one year, we have changed the French political landscape,” Macron told jubilant supporters in Paris, calling on voters to unite behind him as the “voice of optimism and hope for our country and Europe.”

Le Pen, 48, addressing National Front backers in Henin-Beaumont, in northern France, said that French voters face a “historic opportunity” to choose between “savage globalization that threatens our civilization” or a France “with borders that protect our jobs and our purchasing power.” 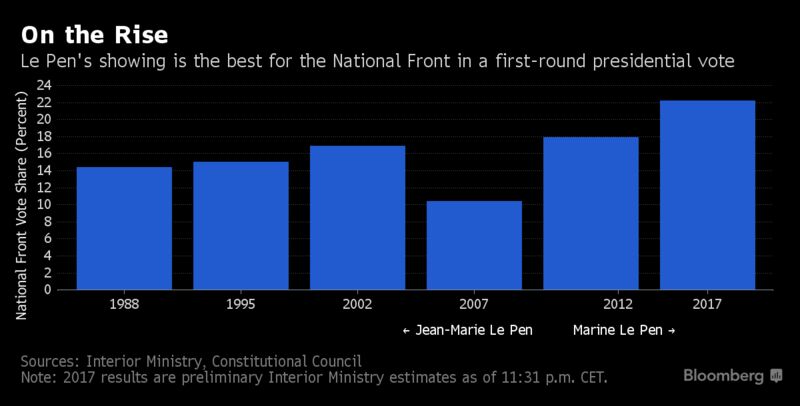 Le Pen, who wants to take France out of the euro and clamp down on immigration, has trailed Macron, a committed globalist, in almost every opinion poll for the runoff by a margin of some 20 percentage points. A snap Ipsos survey late on Sunday suggested he’d win by 62 percent to 38 percent for Le Pen.

The candidates, with personalities as different as their politics, now have two weeks to show voters that they are best prepared to assume the presidency of a country that is one of the EU’s six founding members, a nuclear power and a veto-wielding permanent member of the UN Security Council alongside the U.S., Russia, China and the U.K.

Macron is a liberal technocrat who graduated from the country’s elite school, speaks fluent English and did a stint as an investment banker before entering politics. Escaping from the wreckage of Francois Hollande’s Socialist government, he mounted an unprecedented independent candidacy that was initially written off.

Le Pen has spent her life steeped in the far-right politics of her father, Jean-Marie, who founded the National Front when she was a child. A lawyer, she has spent much of her career trying to drag the party away from its racist and anti-Semitic roots and toward the mainstream.

Le Pen plans to cut legal immigration in France to 10,000 people a year, put a tax on foreign workers and bring back border controls that the EU eliminated. On the economy, she wants to abandon the euro, take control of the central bank and fire up the printing presses to finance welfare spending. Upon becoming president, she plans to go to Brussels to re-negotiate France’s status in the EU and to hold a referendum on reintroducing the franc.

Macron, by contrast, wants to rebuild France’s partnership with Germany to bring in a new era of European cooperation. He aims to simplify French labor law to boost economic growth and step up public investment in training and education.

Front-runners for the past three months, the rivals crossed swords regularly on the campaign trail in a preview of the themes that are likely to dominate in the next two weeks.

“Nationalism is war,” Macron, who grew up near the battlefields of World War I, told Le Pen in a televised debate earlier this month. “I come from a region that is full of its cemeteries and I don’t want to go back to that.”

In a March debate, Le Pen mocked the complexity of Macron’s answers. “You’ve just spoken for seven minutes and I have no idea where you stand,” she said.

The next two weeks will test the appeal of both candidates’ stances, above all on the economy, Europe and security. Le Pen said that the path of “unfair global competition” and “the free movement of terrorists” was one that represented “money as king.”

“The task is gigantic,” Macron said. “The fight to lead our country begins today.”