EghtesadOnline: European Union President Donald Tusk pledged to seek an “orderly” Brexit after U.K. Prime Minister Theresa May set in motion the process for the first withdrawal of a country from the bloc.

Tusk spoke as the leaders of Britain’s 27 fellow EU nations signaled the challenges ahead while pledging to work “constructively” with the government in London and expressing hope that the U.K. would be a “close partner” after Brexit. The EU “will remain determined and united,” he told reporters in Brussels.

“Our first priority will be to minimize the uncertainty caused by the decision of the United Kingdom for our citizens, businesses and members states,” the EU government chiefs said in a joint statement on Wednesday after Tim Barrow, Britain’s ambassador to the bloc, delivered to Tusk a hand-signed letter from May invoking the European treaty article on secession. “We will start by focusing on all key arrangements for an orderly withdrawal.”

According to Bloomberg, the two-year Brexit process will test the EU’s ability to tame populist forces on the rise across Europe, deepen integration in areas ranging from the euro to defense, seal free-trade pacts with the likes of Japan and limit damage to commerce and finance as a result of a divorce with the bloc’s No. 2 economy.

May is making good on her pledge to respect a June 2016 U.K. referendum in which 52 percent of voters opted to leave the EU after more than four decades of membership. The ballot’s outcome led May’s predecessor, David Cameron, to resign, has reignited an independence drive in Scotland and has prompted leaders in Europe to express regret while vowing firmness in the Brexit talks.

Britain’s EU partners are seeking initial agreements in the upcoming negotiations on a U.K. divorce payout of up to 60 billion euros ($65 billion) and on the rights of citizens from across the bloc who live in the country. Also on the priority list is a deal on the land border between Ireland and Northern Ireland, which stayed in the U.K. after Irish independence in 1922 and which suffered decades of deadly violence before the arrival of the European single market and a peace accord.

European officials have signaled that progress over these three matters in the coming nine to 12 months could pave the way for parallel talks with Britain over a free-trade accord that would take effect after the country leaves.

Jean-Claude Juncker, president of the European Commission, the EU’s executive arm, said in January that the Brexit negotiations will be “very, very, very difficult.” The EU’s lead Brexit negotiator, Michel Barnier, said last week that there would be “serious consequences” were the U.K. to leave the EU without an agreement. 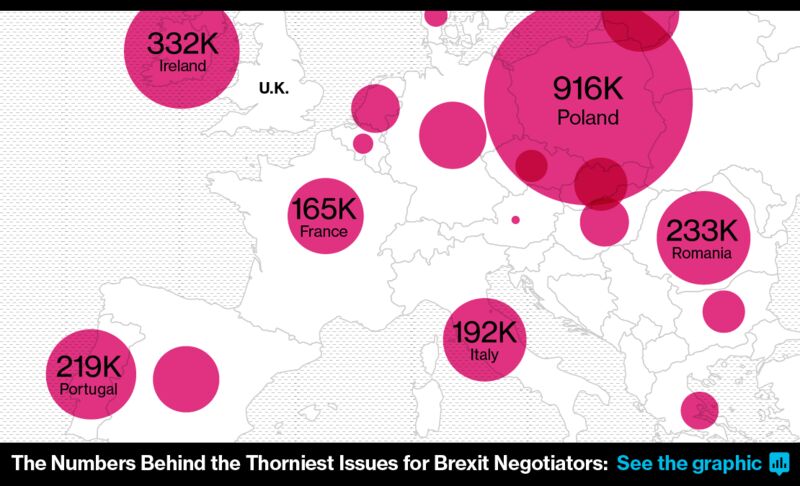 In their statement on Wednesday, the EU leaders left open the possibility of no accord, saying they would “strive to find an agreement.”

Tusk plans to draft negotiating guidelines for Barnier that the leaders of the U.K.’s EU partners intend to approve on April 29. Meanwhile the European Parliament, which must endorse any Brexit deal, will outline its priorities in a resolution due to be voted on next week.