According to Bloomberg, Lee is the highest-profile business figure indicted in a sprawling corruption investigation that’s also led to Park’s impeachment and spurred outrage over “chronic corruption” in ties between government and family-run conglomerates. Special Prosecutor Park Young-soo has called the legal contest surrounding Lee South Korea’s “trial of the century,” given his global profile and the amounts of money involved.

Hearings at Seoul’s Central District Court are set to last up to three months, during which Lee will fight charges from bribery to embezzlement. The biggest point of contention will be whether Samsung’s donations to entities led by Park’s friend, Choi Soon-sil, were intended to win government backing for a controversial 2015 merger that made it easier for Lee to control the Samsung Group chaebol. The 48-year-old executive has denied wrongdoing.

“Proving there was an exchange of money for favors is going to be challenging,” said Hong Jung-seok, a lawyer who worked for the special prosecution until the end of last month. “The trial will draw attention from around the world, not just for the defendant’s fame abroad, but also for the size of the alleged bribe.”

Shares in Samsung Electronics, the conglomerate’s largest corporation, stood largely unchanged, even with some of the most powerful figures in the country under scrutiny several miles apart. A constitutional court will decide at 11 a.m. Friday whether to uphold Park’s impeachment and remove her from office, a ruling almost certain to provoke protests whatever the outcome. The scandal has already engulfed the streets of Korea’s capital for months, as protests spring up regularly under the watchful eyes of police in riot gear.

In trying to prove their case, prosecutors will probe the complex web of ties through which the chaebol that control Korea’s economy allegedly trade money for political favors. Park’s investigation has already led to about 30 indictments and ensnared establishment figures from the president of a prestigious university to the head of the country’s horseback-riding association, who’ve been accused of easing Choi’s daughter’s college admission and equestrian lessons.

Lee now faces five years to life in prison if convicted. Under South Korea’s three-tier judiciary system, Lee can turn to an appellate court and then the Supreme Court if he loses, with each court taking up to two months to deliberate. His own father avoided jail time despite two previous criminal convictions, thanks to government pardons.

Lee’s predicament casts uncertainty over the succession at Samsung, which has been in transition since his father suffered a crippling heart attack in 2014. The prolonged absence of its de-facto head may delay major decisions at Samsung Electronics, which is set to unveil the latest version of its flagship smartphone, the Galaxy S8, this month. Still, Samsung has said it has a strong management team in place to run the business, and the company’s shares have risen 11.5 percent this year, more than three times the gain in the benchmark KOSPI index.

Detained outside Seoul since February, Lee must win the trial to resume guiding a $240 billion corporation trying to bounce back from last year’s botched debut of the Note 7, which showed a tendency to burst into flame.

Lee was indicted last month along with four other Samsung executives, but was the only one to have been detained. The prosecutor accuses him of conspiring to transfer 29.8 billion won ($26 million) to Choi’s organizations in return for favors. Those allegedly included currying support from the government-backed National Pension Service for a 2015 merger of Cheil Industries Inc. and Samsung C&T Corp. That deal -- which cemented Lee’s control -- was narrowly approved over the opposition of activist investor Paul Elliott Singer.

Other charges against Lee include hiding assets overseas, perjury and hiding criminal profits. Samsung said Monday it disagrees with Park’s findings. “Samsung has not paid bribes nor made improper requests seeking favors. Future court proceedings will reveal the truth,” it said in a statement.

The special prosecution’s investigation moved much faster than it would have in jurisdictions such as the U.S.: even initial investigations into then-President Bill Clinton’s relationship with White House intern Monica Lewinsky took the better part of a year. Park had sought, but failed to get, a one-month extension to a 90-day investigation deadline he was given. Wrapping up his investigation, the prosecutor on Monday partly blamed the timeframe for rendering his probe “half complete.”

Lee was absent from Thursday’s hearing, which is designed to hammer out procedures that govern the trial. He’s hired Bae, Kim & Lee LLC, one of the country’s biggest law firms, for his defense, after having been represented during the investigation by a former judge who specialized in criminal cases and tax lawsuits. The Seoul-based law firm declined by email to comment on the case.

Lee’s trial begins just before South Korea’s constitutional court, a separate legal branch, wraps a months-long deliberation on a December impeachment motion passed against the country’s president. Should the court approve the motion, Park will lose her presidential immunity and an election will follow in two months to replace her.

The president has so far refused to be questioned by prosecutors over suspicions that she asked Lee to support Choi financially. She’s even barred investigators from entering the Blue House, the palatial Korean seat of power. A lawyer for Park on Monday reiterated her denial of the allegations.

During Thursday’s hearing, Lee’s lawyers and the special prosecutor will present the gist of their arguments to the presiding judge Lee Yeong-hun, said court spokesman Rhee Eun-sang. The 47-year-old justice will be assisted by two others, and there will be no jury.

While a typical trial could take up to 18 months, Lee’s will be fast-tracked under a special prosecution law. Regardless of the final verdict, the public hearings risk tarnishing Samsung’s brand just as it begins to put the Note 7 debacle behind it. 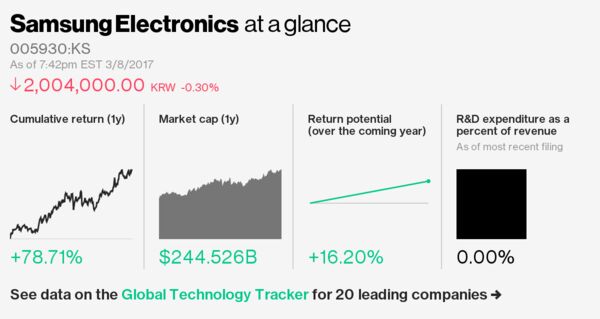 “It’s an international embarrassment,” Eric Schiffer, chairman of Irvine-based Reputation Management Consultants, said by email. “But it’s not going to be reputation carnage for Samsung. Nor will it materially affect sales because Samsung is bigger than Lee.”