EghtesadOnline: For cryptocurrency investors, January is turning into a month to rue.

Digital coins have mostly slid this week, with Bitcoin heading for its worst monthly decline since February 2014, as U.S. regulators ramp up their scrutiny of one of the world’s largest digital currency exchanges while Facebook Inc. is banning ads tied to the industry, according to Bloomberg. 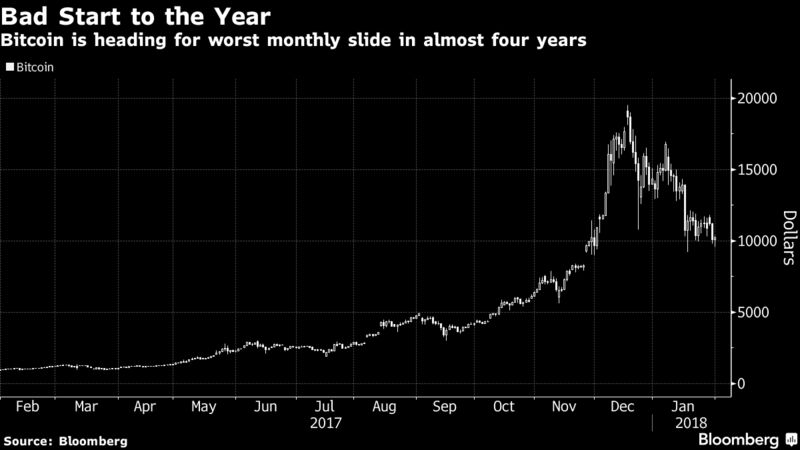 Bitcoin is down about 29 percent this month, trading at $10,172 as of 8:35 in London, according to composite pricing compiled by Bloomberg. Rival coins Ripple and Litecoin have respectively slid about 45 percent and 29 percent, while Ethereum has managed a 47 percent increase. The four coins were little changed on Wednesday.

“The regulatory oversight and the clampdown is really coming to the fore right now,” Stephen Innes, head of trading for Asia Pacific at Oanda, said by phone from Singapore. “I don’t think we’ve seen the last of it.”

The U.S. Commodity Futures Trading Commission sent subpoenas on Dec. 6 to cryptocurrency trading venue Bitfinex and Tether, a company that issues a widely traded coin it claims to be pegged to the dollar, according to a person familiar with the matter who asked not to be identified discussing private information. The firms share the same chief executive officer.

U.S. regulators have moved to crack down on the industry after the emergence of various companies or people raising money through an ICO, or initial coin offering, with no apparent business behind it. The U.S. Securities and Exchange Commission said this week that it got a court order freezing the assets of a Texas-based initial coin offering that claimed to have raised more than $600 million. The order stops AriseBank from raising any additional cash from investors.

Cryptocurrencies have yet to sustain a rally after a record $500 million heist from Japanese exchange Coincheck Inc. on Jan. 26, further intensifying calls for increased oversight in global trading hotbeds such as South Korea.