EghtesadOnline: Jack Ma, who launched China’s largest e-commerce company two decades ago and rode it to a $47.6 billion fortune, turns out to have created billions of dollars of wealth for at least 10 others -- a total of almost $100 billion.

By investing directly in or partnering with companies that provide services for his online buying platforms -- from payment systems to delivery companies -- Ma and his Alibaba Group Holding Ltd. have minted a network of people whose combined fortunes total more than $52 billion, according to the Bloomberg Billionaires Index. With Ma’s wealth included, the collective net worth is larger than the economies of 136 countries, Bloomberg reported.

"Jack is a long-term visionary," said Duncan Clark, author of the book “Alibaba: The House That Jack Ma Built” and an early adviser to the company. The network of companies all feeding Alibaba at the center "is something Jack Ma envisioned and planned from a long time ago."

The fortunes have emerged from Alibaba’s supporting industries -- e-payments and insurance, delivery companies and complementary retailers such as supermarkets. 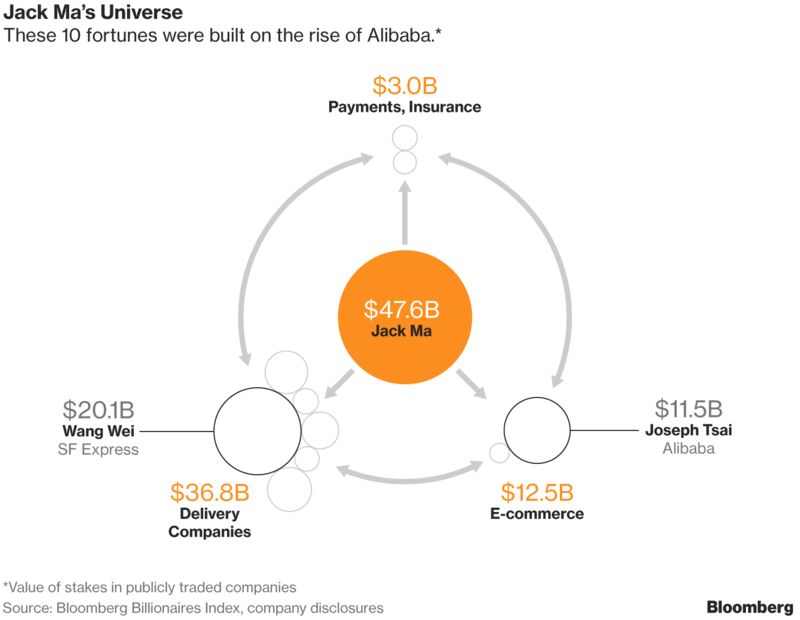 At least two billionaires have emerged this year from the fintech world supporting Alibaba. One of them is Ou Yafei, of ZhongAn Online P&C Insurance Co., which offers customers shipping return insurance through a click of a button for purchases on Alibaba’s Taobao online mall. The company, which counts Alibaba’s online payments business, Ant Financial, as its largest shareholder, had an initial public offering in Hong Kong in September. Min Luo from Qudian Inc., which provides credit loans to online shoppers in partnership with Ant Financial, had an IPO in the U.S. in October.

The company has primarily made its money shipping Alibaba’s goods, as have the delivery companies of ZTO Express Cayman Inc., STO Express, Yunda Holding Co. -- and YTO Express Group Co., which has an 11 percent ownership stake from Alibaba. The companies also cooperate in a logistics network called Cainiao Smart Logistics Network Ltd., which is majority owned by Alibaba.

He compared Alibaba with Tencent Holdings Ltd., China’s biggest operator of online games, which along with Alibaba and Baidu Inc. dominate China’s tech industry. Tencent "relies on a gaming business that follows a closed production circle of engineers’ design and development,” Wu said.

Alibaba co-founder and vice chairman, Joseph Tsai, is the second-richest person to come from the Hangzhou-based company, with a net worth of $11.5 billion, according to the Bloomberg index. He recently agreed to buy a stake in the Brooklyn Nets after earlier buying a lacrosse team in California.

In addition to the 10 billionaires, Ant Financial created more than a dozen more, based on Bloomberg reporting from 2015, when Ant was valued at $50 billion. The company’s shareholder structure has changed since then and ownership details aren’t clear – and may not be until its planned initial public offering -- meaning that it’s unknown how many people associated with Ant Financial are billionaires. Alibaba has the right to acquire as much as 33 percent of Ant, which was valued at $60 billion in its last funding round, subject to regulatory approval.

Ma started Alibaba in 1999 at his home in Hangzhou, creating the “Alibaba Partnership.” According to the company’s 2014 prospectus, it includes five executives from Ant Financial, and one from delivery platform China Smart Logistics. The members of the partnership control 350 million shares that, once fully vested, are valued at $65.2 billion today. Ma and Tsai have stakes valued at $38.9 billion.

A spokesman for Alibaba and Ant Financial declined to comment on the wealth creation. Representatives of YTO, STO, Yunda, SF Express, ZhongAn and Qudian declined to discuss the wealth of their founders or primary shareholders. An external investor relations representative of ZTO, Christian Arnell, said, "Neither company would be able to grow at the rapid rates that they do would the other not exist."

"The company often makes sure that management of their affiliates and partners have proper alignment of incentive to have the best chance of mutual success," Rob Sanderson, managing director at MKM Partners LLC, in Stamford, Connecticut, said by email. "The scale of the ecosystem often makes successful ventures very large companies. This can sometimes make individuals involved very wealthy."

Mostly because of Alibaba’s Tmall and Taobao shopping sites, China has evolved into the world’s largest e-commerce market -- putting the company in a race with Amazon.com Inc. in market value. China’s Singles’ Day, promoted as a day of sales every year on Nov. 11, last year beat Amazon’s single-day tally on both “Black Friday” and "Cyber Monday." This year, Singles’ Day sales were almost 40 percent higher than last year, exceeding $25 billion.

"Both Amazon and Alibaba are transforming commerce and media, retail and beyond, but Jack Ma has a more instinctive feel for business driven by his experience on the street as a merchant," said Clark, the former Alibaba adviser. "Jeff Bezos went to Princeton, worked on Wall Street, identified books as a sector based on detailed analysis. Jack Ma is more driven by gut feel, not analytics." 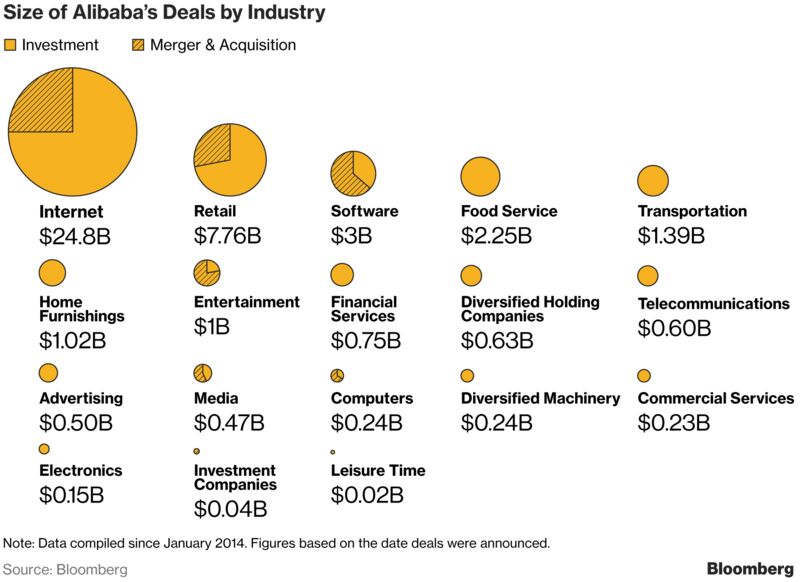 China’s online shoppers spent an average of 11,404 yuan ($1,718) each last year, a number forecast to grow 17 percent by 2019, according to a report from iResearch consultancy. The online retail market’s size is projected to double to $1.7 trillion by 2020, according to a February report from Goldman Sachs Group Inc.

The boom is due to what’s known as consumption upgrade, where China’s consumers continue to improve the quality of products they buy and their living standards, due to rising disposable incomes. They’ve risen 30 percent in the 2013-2016 period.

Meanwhile, Ma has said he hopes to continue driving innovation -- a goal that will surely continue to carry along others.

“I don’t want to make our company a machine of making money,” Jack Ma said in a panel discussion in October, according to a video posted by the Philippines’ De La Salle University, where Ma was presented an honorary degree. “We should be the engine of the innovation of the world for this century.”