The company let suppliers reduce accuracy of the phone’s Face ID system to speed up production.

EghtesadOnline: As of early fall, it was clearer than ever that production problems meant Apple Inc. wouldn’t have enough iPhone Xs in time for the holidays. The challenge was how to make the sophisticated phone—with advanced features such as facial recognition—in large enough numbers.

As Wall Street analysts and fan blogs watched for signs that the company would stumble, Apple came up with a solution: It quietly told suppliers they could reduce the accuracy of the face-recognition technology to make it easier to manufacture, according to people familiar with the situation.

With the iPhone X set to debut on Nov. 3, we’re about to find out whether the move has paid off. Some analysts say there may still be too few iPhone Xs to meet initial demand. Ming-Chi Kuo of KGI Securities predicts Apple will have two to three million handsets available on launch day and 25 million to 30 million units for the holiday quarter, down from his previous forecast of 40 million. For comparison, Apple sold 78 million phones during the same period last year, although that included all models, Bloomberg reported.

Apple is famously demanding, leaning on suppliers and contract manufacturers to help it make technological leaps and retain a competitive edge. The company’s decision to downgrade the accuracy of its Face ID system—if only a little—shows how hard it’s becoming to create cutting-edge features that consumers are hungry to try. And while Apple has endured delays and supply constraints in the past, those typically have been restricted to certain iPhone colors or less important offerings such as the Apple Watch. This time the production hurdles affected a 10th-anniversary phone expected to generate much of the company’s revenue. Apple declined to comment.

About a month ago, Foxconn Technology Group pulled as many as 200 workers off an iPhone X production line. Apple was struggling to get sufficient components for the phone and needed fewer people to put it together. The main culprit, the people said, was the 3-D sensor that recognizes faces and unlocks the handset. Foxconn declined to comment.

The sensor was always going to be a major technical challenge. Until the iPhone X, the most significant deployment of the technology was in Microsoft Corp.’s Kinect controller, which the Xbox console used to detect a gamer’s movements. But the Kinect was the size of a large book, and Microsoft sold just 24 million units of the controller over two years, a far easier production challenge than the one confronted by Apple, which sells more than 200 million iPhones a year.

“That technology is something we have been looking at for five years,” Chief Design Officer Jony Ive said in an onstage discussion hosted by The New Yorker this month. “We had prototypes that were this big,” he added, holding his hands about a foot apart. By the time Apple had greenlighted the iPhone X, the company was looking for technology that could be squeezed into a space a few centimeters across and millimeters deep.

Despite demanding the near impossible, Apple didn’t add extra time to get it right—giving suppliers the typical two-year lead time. The tight schedule underestimated the complexity of making and assembling exceedingly fragile components, said one of the people familiar with the production process. That left suppliers short on time to prepare their factories and explains why the iPhone X is being released a full six weeks later than the iPhone 8, said this person, who asked to remain anonymous to discuss an internal matter. “It’s an aggressive design,” the person said, “and it’s a very aggressive schedule.” 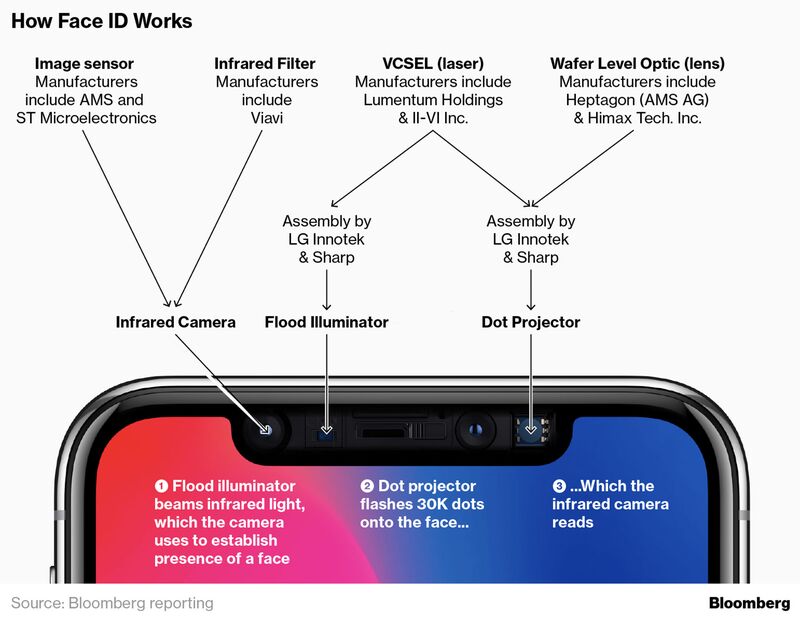 The dot projector is at the heart of Apple’s production problems. In September, the Wall Street Journal reported that Apple was having trouble producing the modules that combine to make the dot projector, causing shortages. The dot projector uses something called a vertical cavity surface-emitting laser, or VCSEL. The laser beams light through a lens known as a wafer-level optic, which focuses it into the 30,000 points of infra-red light projected onto the user’s face. The laser is made of gallium arsenide, a semiconductor material, and the lens is constructed of glass; both are fragile and easily broken. Precision is key. If the microscopic components are off by even several microns, a fraction of a hair’s breadth, the technology might not work properly, according to people with knowledge of the situation.

To make matters worse, Apple lost one of its laser suppliers early on. Finisar Corp. failed to meet Apple’s specifications in time for the start of production, and now the Sunnyvale, California-based company is racing to meet the standards by the end of October. That left Apple reliant on fewer laser suppliers: Lumentum Holdings Inc. and II-VI Inc.

The fragility of the components created problems for LG Innotek Co. and Sharp Corp., both of which struggled to combine the laser and lens to make dot projectors. At one point only about 20 percent of the dot projectors the two companies produced were usable, according to a person familiar with the manufacturing process. LG Innotek and Sharp slowed the production process down in an effort to prevent breakages and ensure the components were assembled with the required level of precision.

LG Innotek confirmed in a conference call with analysts Wednesday that there has been a problem with yield and that mass production is just beginning. The current modules are “significantly” more difficult to produce than previous cameras, said Kim Jong-ho, who oversees the South Korean supplier’s optical solution division. He said manufacturing has improved enough to meet the iPhone X launch date, though supply may be limited, and stressed Innotek has been able to achieve a “far stronger” yield than a rival supplier—a reference to Sharp. The Japanese company declined to comment.

To boost the number of usable dot projectors and accelerate production, Apple relaxed some of the specifications for Face ID, according to a different person with knowledge of the process. As a result, it took less time to test completed modules, one of the major sticking points, the person said.

It’s not clear how much the new specs will reduce the technology’s efficacy. At the phone’s official unveiling in September, executives boasted that there was a one in a million chance that an interloper could defeat Face ID to unlock a phone. Even downgraded, it will probably still be far more accurate than TouchID, where the odds of someone other than the owner of a phone being able to unlock it are one in 50,000.

Besides struggling to produce enough 3-D sensors, Apple has suffered from a dearth of suppliers capable of making organic light-emitting diode displays, Bloomberg reported last year. The OLED, which delivers sharper images, is the iPhone X’s other main advance. But Apple is dependent on Samsung Electronics Co. for its entire supply of the components.

For months, Apple investors have fretted that a shortage of iPhone Xs would send consumers into the arms of rival smartphone makers such as Samsung and Huawei Technologies Co. Apple seems to have overcome the biggest production hurdles. Sharp is working to bring the production yield for dot projectors above 50 percent, while LG Innotek has already surpassed that level, which both companies consider acceptable. Meanwhile, Apple is working with Taiwan’s Himax Technologies Inc. to boost production of lenses to make up for lower-than-needed output from Heptagon, a Singaporean company that so far has been the only lens supplier.

The 3-D sensor shortage is expected to end in early 2018. Even so, signs of weakness in iPhone 8 sales means Apple could sell fewer handsets than last year—despite all the fanfare surrounding the iPhone X.