Apple Bets on Augmented Reality to Sell Its Most Expensive Phone

EghtesadOnline: Apple Inc. packed its $1,000 iPhone with augmented reality features, betting the nascent technology will persuade consumers to pay premium prices for its products even as cheaper alternatives abound.

The iPhone X, Apple’s most expensive phone ever, was one of three new models Chief Executive Officer Tim Cook showed off during an event at the company’s new $5 billion headquarters in Cupertino, California, on Tuesday. It also rolled out an updated Apple Watch with a cellular connection and an Apple TV set-top box that supports higher-definition video.

According to Bloomberg, the event marked the 10th anniversary of the original iPhone and started with a remembrance of the late co-founder Steve Jobs. The product announcements were greeted with enthusiasm but little surprise by analysts, investors and fans of the company’s products. The Watch capabilities pushed Apple shares up more than 1 percent, but the iPhone X had few ground-breaking features that weren’t already telegraphed, and the stock gave up those gains to end the day down 0.4 percent at $160.86.

"Expectations were for the company to deliver a device with a relatively more robust set of upgraded features," Michael Olson, an analyst at Piper Jaffray, wrote in a note to investors. "Apple generally met these lofty expectations."

Those features are mostly designed for augmented reality, which superimposes digital information onto a person’s view of the real world. Cook has said AR could be as significant as the smartphone itself, and some analysts expect it to drive hundreds of billions of dollars in extra device sales in coming years.

Forrester analyst Julie Ask said she’s more excited about the cellular Watch than the iPhone X. "The Watch is showing us a future where we’re not carrying around a wallet and a smartphone everywhere we go," she added.

Apple stock has gained about 40 percent this year on expectations the iPhone X (pronounced "ten") will reignite sales growth after a rare decline last year. The iPhone accounts for almost two-thirds of total sales, and it’s a hub for most of Apple’s other products and services.

With a base price of $999 for the 64 gigabyte version, the iPhone X boasts a brighter and more energy-efficient OLED display screen. A front facing 3-D sensor array recognizes users’ faces to unlock the handset and turns facial expressions into animated emoji icons called animoji. The 256 gigabyte version costs $1,149, according to Apple’s website. 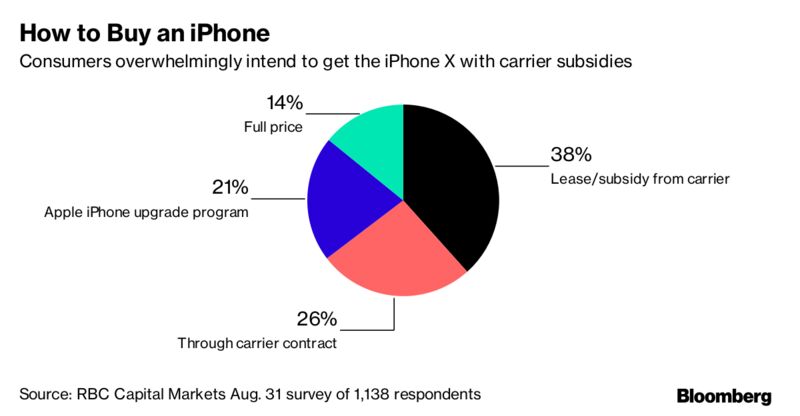 A $1,000 iPhone could add as much as 6 percent to Apple’s 2018 earnings per share, Bernstein analyst Toni Sacconaghi estimated last week. But that depends on the iPhone X being a hit, and there’s more competition from lower-cost Chinese competitors such as Huawei Technologies Co. and Xiaomi Corp., which timed the introduction of their new phones around Apple’s launch to attract customers who may be deterred by the iPhone X’s price.

The high price may be affordable for devoted Apple fans and other higher-income earners who will pay through monthly installment plans, which accounts for about 80 percent of U.S. cellphone users, according to Bob O’Donnell, president of TECHnalysis Research.

It may, however, be a problem in China, where consumers focus more on status and design, and will get the iPhone X with its new screen or nothing. "Huawei, Xiaomi, Oppo, Vivo are offering edge-to-edge screens at $300 or less," he added.

In a nod to cheaper alternatives, Apple also rolled out iPhone 8 and 8 Plus models that start at $699 and $799 respectively, and cut the price of the iPhone SE by $50 to $349. That left Apple with its broadest range of phones ever.

The iPhone X’s higher price is unlikely to lose Apple customers, since they can always opt for the cheaper models, Ben Evans, a partner at venture capital firm Andreessen Horowitz, said. Those cheaper handsets are particularly important for attracting new customers. While almost 1 in 5 iPhone users are willing to spend more than $1,000 on the new handset, just 11 percent of consumers overall would be willing to do so, a recent Barclays survey found.

The OLED display is likely the most expensive new component in the iPhone X. But it may address the main reason people told Barclays they upgrade: improved battery life. Older LCD phone screens require an energy-intensive backlight, while OLED displays serve as their own light source, reducing power consumption. Apple said the iPhone X lasts two hours longer than the previous iPhone.

Apple executives spent much of Tuesday’s event describing how AR is at the core of the new flagship iPhone X. Its new screen, 3-D sensors, and dual cameras are designed for AR video games and other more-practical uses such as measuring digital objects in real world spaces. Months before the launch, Apple released a tool called ARKit that made it easier for developers to add AR capabilities to their apps.

These technologies have never been available in consumer devices and "solidify the platform on which Apple will retain and grow its user base for the next decade," Gene Munster of Loup Ventures wrote in a note following Apple’s event.

The company is also working on smart glasses that may be AR-enabled, people familiar with the plan told Bloomberg earlier this year.

Apple has been slower to AR technology than Google, which launched an AR software tool called Tango back in 2014. But Apple’s ability to push the ARKit software to hundreds of millions of new and updated iPhones at once has already persuaded developers to start making new AR apps for these devices.

AR may generate more revenue for developers selling products on the App Store, and Apple will take a cut -- part of the company’s plan to double sales from services to about $50 billion by 2020. The AR market could be worth $404 billion over the next three years, with $286 billion from purchases of new devices and the rest in software and services, Morgan Stanley estimated this week. In the most optimistic scenario, that would lift Apple’s 2019 earnings per share 27 percent higher than consensus estimates, the analysts wrote.

While the iPhone 8, 8 Plus, Watch Series 3 and TV 4K will be available on Sept. 22, the iPhone X won’t go on sale until Nov. 6. That’s about six weeks later than Loup’s Munster expected. "The ship date likely won’t have a material impact on the number of units sold, but will push some unit sales into the March quarter," he said.

Apple has faced manufacturing difficulties with the new handset, leading to production delays. The company has been unable to source enough OLED panels for the new screen because there are only a handful of factories making the component, people familiar with the situation told Bloomberg earlier this year.

Efforts to incorporate a fingerprint scanner underneath the touchscreen also prompted delays and were ultimately abandoned, others with knowledge of the plan said in July. The FaceID solution ultimately replaced the fingerprint sensor.