EghtesadOnline: Some of the world’s top auto-parts suppliers aren’t buying all the enthusiasm about the electric vehicles hyped by Tesla Inc.’s Elon Musk and larger carmakers trying to keep up.

Executives at five of the 25 biggest suppliers to automakers in North America have all downplayed this month expectations for electric-vehicle sales. After Volvo Car Group made a splash with its pledge to put electric motors in every new car by 2019 and Musk predicted more than half of U.S. auto production would be electric in 10 years, the parts makers have issued modest forecasts and spoken in circumspect, even defiant, tones, Bloomberg reported.

“There’s a lot of buzz and a lot of talk about how the world’s going to change to electrified vehicles overnight, and I’m here to tell you it’s not going to happen overnight, and it’s not going to happen for decades,” David Dauch, Chief Executive Officer of American Axle & Manufacturing Holdings Inc., said Tuesday at a JPMorgan conference in New York. “I’m a strong believer in the internal combustion engine. I think it’s going to continue to be here for some time.”

The parts makers have to walk a fine line. Consumers haven’t yet demonstrated a willingness to buy electric vehicles in droves, giving both carmakers and their suppliers reason to be conservative. At the same time, governments are beginning to demand cleaner cars to curb pollution in mega cities from Mumbai to Mexico City. And investors seem inclined to reward those trying to transform transportation, with all-electric Tesla surpassing the likes of Ford Motor Co. and General Motors Co. by market value this year. Tesla shares are up 67 percent this year.

“Right now you have an industry that’s sort of stuck between the market and what they see from their clients,” said Matt Stover, an analyst with Susquehanna International Group in Boston. “They see Tesla with an enterprise value of $70 billion, and they see what their clients are awarding to them, and they say, ‘Wow, something doesn’t make sense here.’”

“They know what’s going to happen, but they have to say what is going to be popular to be perceived as a progressive company,” Walker said Aug. 2 at the Center for Automotive Research Management Briefing Seminars near Traverse City, Michigan.

Magna and Delphi Automotive Plc, which both supply powertrains and electronics systems, see the way forward being paved with lots of hybrid engines. Delphi CEO Kevin Clark told investors at the JPMorgan conference this week that 95 percent of vehicles will still have combustion engines in 2025, and about 30 percent will have some form of gasoline-electric system. Just 5 percent will be purely electric, Clark projected.

BorgWarner Inc., which has made two acquisitions in as many years worth about $1.3 billion to help develop products for electric powertrains, forecasts that a fifth of vehicles will be hybrid or electric in 2023, with pure EVs being just 3 percent of sales. James Verrier, CEO of the maker of turbochargers, is skeptical of Musk’s prediction to state governors last month that more than half of U.S. production will be electric in a decade.

“I would probably say that too if I ran an electric vehicle company,” he said in an interview Monday in New York. “We hold a view probably similar to Magna that there will be an evolution towards a range of electrification.” 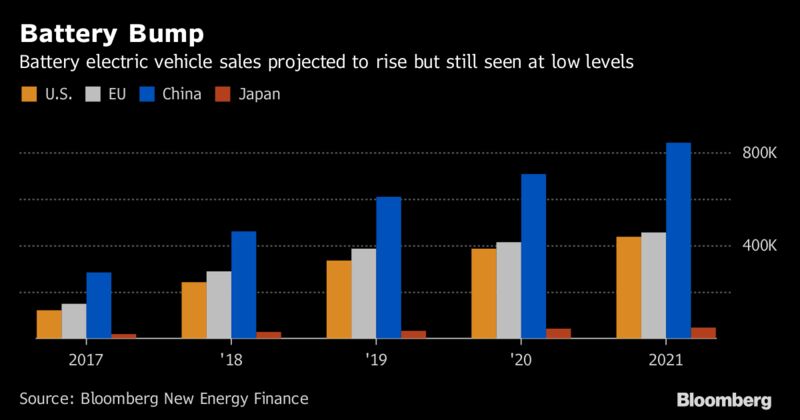 The parts manufacturers aren’t in complete denial. As Musk prepares to unveil a battery-powered semi truck this fall, suppliers to commercial vehicle manufacturers have been spending on electrification, too.

“They have to defend their product mix, but they’re probably being more active than they try to come across as,” said Kent Lucas, head of business development at VectoIQ, which connects suppliers and startups in the automotive space.

Dana Inc. is investing in new parts for cleaner-running semi trucks and construction equipment, though the company forecasts it’ll be at least a decade before commercial vehicles go electric. One contract the company has so far is to provide an axle for a battery-powered bus in China.

“We think our major programs are not likely to be electrified within the next decade,” Dana CFO Jonathan Collins said Tuesday at the JPMorgan conference. “We continue to have conviction around that, but investing now from a position of strength is a better position to be in.”