Elon Musk spent the past week making good on promises, but there’s still a long way to go.

Tesla has completed its first solar roof installations, the company reported Wednesday as part of a second-quarter earnings report. Just like the first Model 3 customers, who took their keys last week, the first solar roof customers are Tesla employees. By selling to them first, Tesla says it hopes to work out any kinks in the sales and installation process before taking it to a wider public audience, Bloomberg reported.

“I have them on my house, JB has them on his house,” Musk said, referring to Tesla’s Chief Technology Officer J.B. Straubel. “This is version one. I think this roof is going to look really knock-out as we just keep iterating.”

Tesla opened up its online store in May and began taking $1,000 deposits for smooth black and textured-glass roof tiles that are virtually indistinguishable from high-end roofing. From most viewing angles, the slick modern shingles look like standard materials, but they allow light to pass through onto a solar cell embedded beneath a tempered surface. The first installations were supposed to start in June. Tesla didn’t say when the actual installations took place.

The company has been adopting an Apple Store strategy for solar power since acquiring SolarCity Corp. last year for $2 billion. The idea is to cut down on the high price associated with actively identifying new customers, and instead attract them passively through its upscale auto stores in shopping malls and other high-traffic locations. Initial trials found the new approach was 50 to 100 percent more effective than at the best non-Tesla locations selling SolarCity products. Tesla halted SolarCity’s door-to-door sales earlier this year and is staffing up more than 70 stores for solar sales.

For total quarterly solar installations, Tesla rebounded a bit from an underwhelming first quarter—its first full quarter after it bought SolarCity. It deployed 176 megawatts, up from 150 megawatts the prior quarter, but less than the 201 megawatts that SolarCity installed in the second quarter of 2016. At least part of the slowdown may be due to the cessation of door-to-door sales. The company said it expects to see growth again in the fourth quarter.

Production of the tiles began at Tesla’s Fremont solar plant in California, but will shift later this year to its new factory in Buffalo, New York, with additional investments from Tesla’s partner, Panasonic. Musk said previously that initial sales will be limited by manufacturing capacity. As production ramps up into 2018, sales will begin in the U.K., Australia, and elsewhere, along with the introduction of additional sculpted terra cotta and slate versions of the solar roof, according to previous reports from the company. 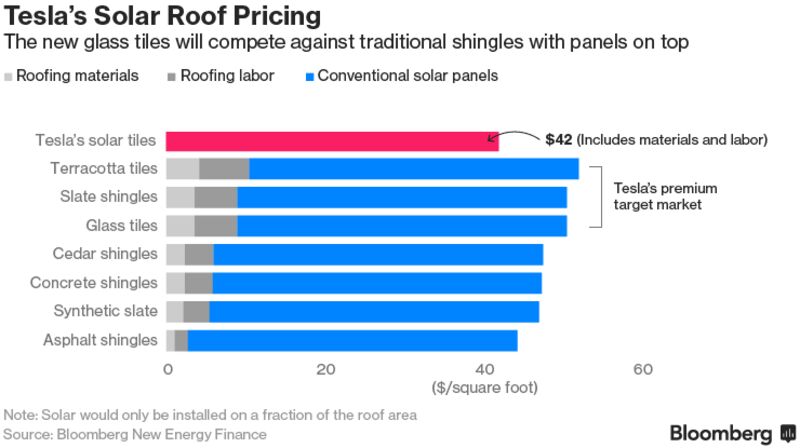 Tesla’s basic premise is to make solar ownership more attractive and affordable by eliminating the need to install both a roof and solar panels. Tesla says it will manage the entire process of solar roof installation, including removal of existing roofs, design, permits, installation, and maintenance. The company estimates that each installation will take about a week.