EghtesadOnline: Bitcoin might be dividing into two separate blockchains, but its downward slide has so far been contained, signaling confidence the biggest cryptocurrency will come out of the split unscathed.

The debate over how to scale bitcoin came to a head Tuesday as some cryptocurrency miners started using software called Bitcoin Cash and splitting a new blockchain off the old one. Blockchain is the technology used for verifying and recording digital currency transactions.

Bitcoin’s price should reflect the split by discounting the new coin, according to Charles Hayter, who runs the cryptocurrency data platform CryptoCompare. He likened it to a stock trading “ex dividend” -- when the buyer isn’t entitled to collect a dividend on the shares, according to Bloomberg. 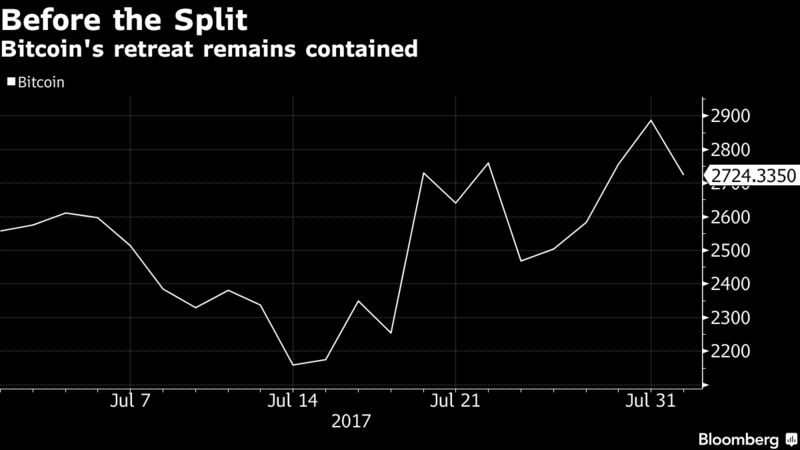 “The price of bitcoin has risen ahead of the split on the expectation that you’ll get that extra cash from bitcoin cash, so it should drop after the split,” Hayter said. “This has happened before in other blockchains. It’s a trading event where there’s number of hoops you have to jump though and people are trying to make a profit.”

Bitcoin Cash started gaining traction in the past week, just as miners fended off another split by rallying behind the scaling mechanism known as SegWit2X. Bitcoin Cash wants to increase the block size -- the files in which transactions are recorded -- while SegWit2X would transfer some of the operating power outside of the main blockchain. In other words, Bitcoin Cash would be one lane with bigger cars, while SegWit2X would be two lanes with smaller cars.

The great majority of miners and developers support bitcoin, while ViaBTC, which has almost 6 percent of bitcoin processing power, is the mining pool backing bitcoin cash.

“There’s a role for both of these coins,” said Cathie Wood, the New York-based chief investment officer at ARK Investment Management, which oversees the first exchange-traded fund with indirect exposure to bitcoin. “One is much more natural for store of value and the other one for a means of exchange.”

“First, Bitcoin Cash has not solved scaling. It has merely kicked the can down the road with slightly larger blocks, but still lacks a credible technology to scale to massively larger numbers of users,” he said in an email. “Second, bitcoin will retain the network of integrated services that make the bitcoin network useful to businesses and consumers.”

Bitcoin holders are set to receive the same amount of bitcoin cash as they have in bitcoin if the exchanges and wallets they use support the new coin. Exchanges including Kraken and ViaBTC have said they’ll support both, while others like Coinbase and Poloniex have said they won’t, citing uncertainty that bitcoin cash will have lasting market value.

Kraken said that it’s working on crediting accounts with bitcoin cash, and that its site’s login function is down due to heavy traffic. While some miners are already using the Bitcoin Cash program, the real differentiation of the two blockchains will emerge when they mine more than 1 megabyte in one block, Hayter said. Bitcoin’s block limit is 1MB while Bitcoin Cash’s is 8MB.

“I’m not as concerned about this except for the administrative nightmare that some people are going to have to go through or have gone through already pulling out of the various exchanges that weren’t going to support it,” ARK Investment’s Wood said.

Bruce Fenton, founder of Atlantic Financial Inc. and a board member at the Bitcoin Foundation, said both currencies should trade heavily Tuesday.

“There are some very large holders who own bitcoin, who don’t like bitcoin and do like bitcoin cash,” he said. “But you also have a lot of people who can’t stand bitcoin cash, and as soon as they have the ability to get those coins they’re going to sell them on the market.”