Tesla Said Close to Agreeing on Plan for China Production

EghtesadOnline: Tesla Inc. is close to an agreement to produce vehicles in China for the first time, giving the electric-car maker better access to the world’s largest auto market, according to people familiar with the matter.

The agreement with the city of Shanghai would allow Tesla to build facilities in its Lingang development zone and could come as soon as this week, said the people, who asked not to be identified because the negotiations are private. Details are being finalized and the timing of the announcement could change. Tesla would need to set up a joint venture with at least one local partner under existing rules and it isn’t immediately clear who that would be, Bloomberg reported.

Representatives for Tesla at the company’s headquarters in Palo Alto, California, didn’t immediately respond to requests for comment. A spokesman for Lingang didn’t answer calls to his mobile phone.

Setting up local production is key for Chief Executive Officer Elon Musk to continue growing in China, where Tesla’s revenue tripled to more than $1 billion last year. Assembling vehicles locally would allow the company to avoid a 25 percent tax that renders Model S sedans and Model X sport utility vehicles more expensive than in the U.S.

China has identified new-energy vehicles as a strategic emerging industry and aims to boost annual sales of plug-in hybrids and fully electric cars 10-fold in the next decade. Government support helped China surpass the U.S. in 2015 to become the world’s biggest market for the non-emission autos. 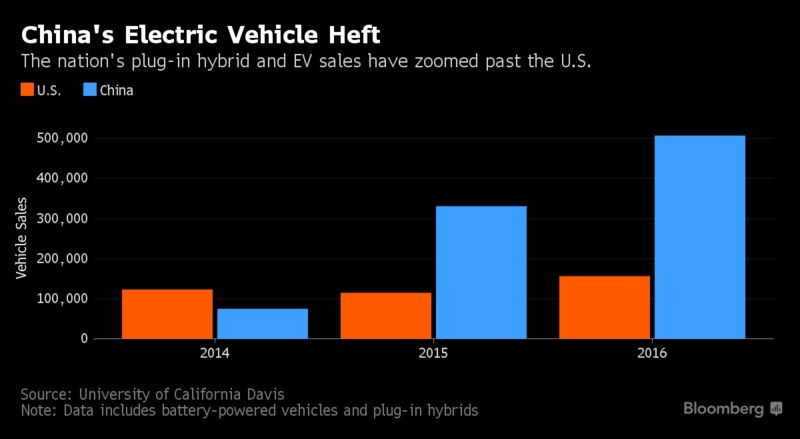 Tesla’s shares rose about 2 percent in after-hours U.S. trading. The stock has gained 73 percent this year. Shanghai Lingang Holdings Co., a state-owned industrial zone developer and landlord, climbed as much as 8.7 percent to a seven-month intraday high. Calls to the company’s investor relations office weren’t answered.

Bringing down the costs of electric cars is crucial to Musk’s ambitions to reach more mass market consumers. Next month, Tesla is slated to begin rolling out the Model 3, a more affordable and smaller electric sedan. Tesla has yet to launch the Model 3 in China. In the U.S., consumers stood in long lines to place $1,000 deposits for the vehicle.

In March, Tencent Holdings Ltd., China’s biggest internet company, bought a 5 percent stake in Tesla for $1.8 billion. Teaming up with the owner of the WeChat and QQ messaging services could help the automaker gain traction in a market where more than 200 companies have announced plans to build new-energy vehicles.

Tesla, which made roughly 80,000 cars in 2016 and aims to boost it by about 7-fold to 500,000 annually by 2018. The automaker also plans to finalize locations of up to three battery Gigafactories this year.

Tesla purchased its only vehicle assembly plant in Fremont, California, from Toyota Motor Corp. in 2010 for just $42 million. The company has estimated the cost of its battery gigafactory near Reno, Nevada, may eventually reach about $5 billion.