A rally in Tesla shares spurred by Chief Executive Officer Elon Musk’s confidence in selling electric vehicles at scale briefly vaulted the company’s market capitalization past the German luxury carmaker in early Friday trading. The amount of ground Tesla covered was vast: BMW was valued at a $30 billion premium as of early December.

According to Bloomberg, the abbreviated change in rank is no small matter. Luxury carmakers like BMW trade at a higher value than the likes of General Motors Co. or Ford Motor Co., which Tesla passed back in April. BMW has a powerful brand among car buffs and affluent consumers and its vehicles command premium prices and fatter margins. In bidding its market cap past BMW, Tesla investors are signaling confidence the company can go up against a formidable player that also sells electric cars -- and prevail.

“The argument is that Tesla has the ability to do things that the others can’t and that, being all-in on electric cars, they will win,” said Kevin Tynan, an auto analyst with Bloomberg Intelligence. “It’s a flawed argument. You can’t tell me that BMW can’t do what Tesla can do.” 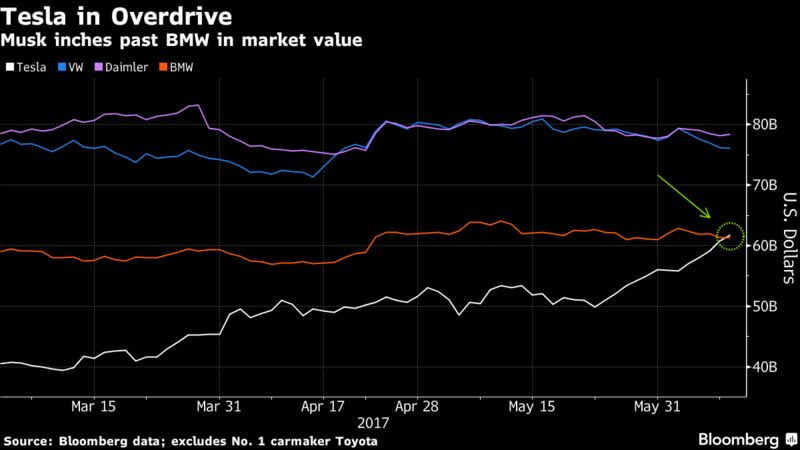 After climbing as much as 1.9 percent and surpassing BMW’s $61.3 billion market value, Tesla shares reversed gains after Hedgeye Risk Management added shorting Tesla to its best ideas list. The stock dropped 3.4 percent to $357.32 at the close in New York, dropping its market cap about $2.6 billion below BMW’s.

Musk, 45, engendered optimism this week by telling shareholders Tuesday his most affordable electric car thus far, the Model 3, will start production as scheduled in July. Within two to three years, Musk sees following that sedan up with a cheaper crossover model, the Model Y, that eventually will draw more demand and need its own assembly plant.

Tesla’s surge in value is controversial. Short interest represented about one fourth of the shares as of the latest quarterly filing. Investors including Jim Chanos, who famously bet early on energy company Enron Corp.’s failure, point to the carmaker’s sparse profits -- it’s posted losses in all but two quarters of its history -- and expect Musk to go through billions in cash to fund his lofty ambitions.

“We think they are going to be burning close to $750 million to $1 billion a quarter for the next handful of quarters,” Chanos said at the Bloomberg Invest New York Summiton Tuesday. Tesla “has its big test ahead of it, the Model 3. It has been losing money selling $120,000 cars, but it hopes to make money selling the $35,000 car.”

Some of the excitement around Tesla is tied to its other business units, including energy, said Ravi Malik, principal and portfolio manager with Los Angeles-based SSI Investment Management, which oversees $1.5 billion in assets, including Tesla convertible bonds. Malik, who called the share price overvalued, estimates the car division is probably $300 of the share price and the rest is based on the possible value of Tesla’s battery business and self-driving car technology.

If Tesla can sell more cars, render its auto business profitable and also break into the power utility industry with its energy storage products, there’s more upside in the stock, Malik said, conceding that’s a lot of ifs.

“It’s a controversial valuation,” Malik said. “At this level, it seems fully valued, but if everything goes right we can see more upside.”

What will eventually determine whether Tesla justifies its valuation is electric car demand really taking off, said Ben Kallo, an analyst with Robert W. Baird & Co. If the car market is near an inflection point in which battery-powered vehicles become the big draw, then Tesla not only has a lead, but players like GM and BMW have a lot of capital trapped in making gasoline-powered autos that could be in decline.

“If we do make this transition to electric vehicles, the other car companies have stranded capital,” Kallo said by phone.

In addition to giving BMW a run for its money in the markets, Tesla is about to be competing more head-on in showrooms.

The Model 3 will start at about $35,000 and may typically sell at prices similar to BMW’s bread-and-butter 3 Series sedan. BMW has the i3 plug-in hybrid in its lineup and plans to sell an electric version of its X3 sport utility vehicle in 2020. Volkswagen AG’s Audi and Porsche brands also plan to introduce sporty electric cars to test Musk’s growth plans.

Not to worry, says Kallo -- Musk has a lot of fans. “I’m not sure if people want electric cars, but they do want Teslas,” he said.