Alibaba's Jack Ma Gets $2.8 Billion Richer in One Day

Ma, 52, is now the richest person in Asia and 14th wealthiest in the world, according to the Bloomberg Billionaires Index. His net worth has climbed $8.5 billion this year to $41.8 billion, Bloomberg reported.

The latest surge came after China’s largest e-commerce company forecast 45 to 49 percent revenue growth in the year ending March, demonstrating how investments beyond online shopping are paying off. Shares in Alibaba, where Ma is chairman, rose 13 percent to a record high. 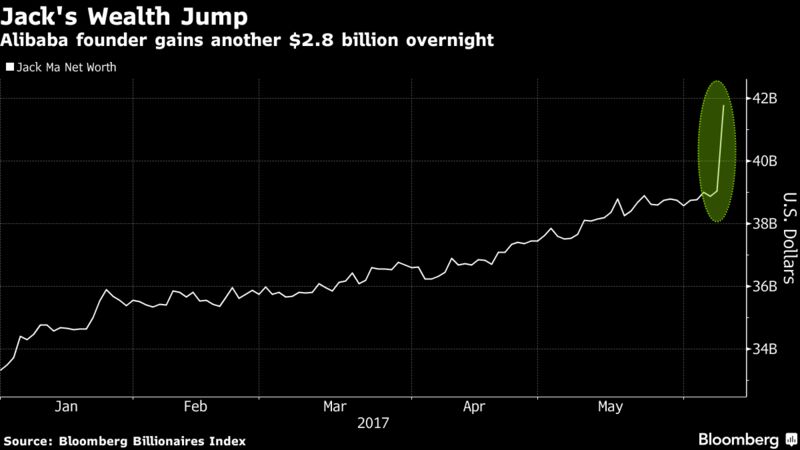 Alibaba and Tencent Holdings Ltd. -- which dominate online shopping and social media, respectively -- have ventured deeper into new areas from cloud computing services to streaming music and video as the country’s economy slows. Alibaba is capturing more digital advertising spending by incorporating social elements such as video in its shopping sites.

Alibaba is holding meetings with investors this week. On Friday, the former English teacher said he wasn’t going to discuss corporate forecasts. He took the stage instead to describe how his company had become effectively the world’s 22nd largest economy -- just after Argentina --- in terms of transactions by never fearing to think big. Ma, who said Alibaba revises 10-year plans annually, foresaw the company becoming the fifth-largest eventually by 2036 by serving a burgeoning Chinese middle classes, taking advantage of global trade and making use of its valuable trove of data.

Ma’s comments about the evolution of data-driven technology echoed Masayoshi Son, Chairman of Japan’s SoftBank Group Corp. SoftBank -- Alibaba’s largest shareholder -- has invested billions in companies such as ARM Holdings Plc with the intention of staking out a leading position in the future Internet of Things.

“The Internet of Things is gonna be big because in the past, machines drink electricity,” Ma told investors. “In the next 20 years, machines will drink data.”

“In the future, no company, no country, no business can survive without data.”