How Mercedes Plans to Recapture Its Early Lead in Robo-Cars

EghtesadOnline: Three decades ago, an experimental Mercedes-Benz van managed to steer, brake and accelerate on its own. But after the technology was refined enough to put an S-Class sedan through its paces on a highway around Paris in 1994, it was largely set aside as commercially unviable.

Now, the prospect of autonomous vehicles is threatening to upend the auto industry, and instead of an enviable head start, Mercedes is just part of the pack in the race to roll out robo-cars. That’s a thorn in the side for Dieter Zetsche, head of the storied brand and chief executive officer of parent Daimler AG, Bloomberg reported.

Zetsche, who started in the industrial giant’s research division in 1976, is spurring Daimler to regain that edge. In 2015, he unveiled the futuristic self-driving F 015 concept car and prodded developers by moving forward targets for introducing the technology several times in recent years, he said in an interview. Positioning Mercedes for the self-driving era could prove a crucial last act for the 64-year-old Zetsche, whose contract runs until 2019.

“It’s very, very important to be one of the first with self-driving cars, because the technology is threatening to overturn carmakers’ core business,” said Jan Burgard, the head of Beryll Strategy Advisors, a Munich-based automotive consulting firm. “To be among the first means to be in a much better position to assess the threat, and in particular shape future development.”

For the crowded field of competitors, ranging from traditional carmakers to cash-rich newcomers from Silicon Valley, the lure is clear. The emergence of autonomous vehicles marks the biggest potential change to personal transport since cars replaced the horse and buggy, and that disruption may grow into a market worth $83 billion by 2025, consulting firm Frost & Sullivan estimates. Zetsche says the changes could come sooner rather than later.

“Having a car drive by itself under certain conditions is, figuratively speaking, just around the corner,” said Zetsche, who was Mercedes’ top development engineer at the time of the Paris self-driving test. While bad weather and hilly terrain are obstacles in some places, “getting around Madrid in a self-driving car under normal circumstances is a realistic scenario by the turn of the decade.”

In an industry dominated by model cycles that generally last seven years, Zetsche is accelerating development. Last year, he set up a skunkworks unit where hundreds of engineers collaborate on electric, self-driving cars as well as alternatives to the personal car such as ride-sharing and robo-taxis. Instead of the traditional bureaucracy, executives are on call to speed decision making.

The icon of German engineering, which takes credit for inventing the car, also set up an accelerator for startups last year to identify and develop promising technologies, a departure from its past mindset when ideas from the outside were more likely to be scoffed at. The new approach appears to be helping, with the automaker moving up the roll-out of 10 electric cars by three years to 2022.

Zetsche, Daimler CEO since 2006, knows what it’s like to fall behind, and to catch up. Mercedes lost the luxury-car sales lead to BMW in 2005 as Daimler’s ill-fated acquisition of Chrysler distracted management. Mercedes only reclaimed the top spot last year after an overhaul of the once-stodgy brand, with Zetsche spearheading racier new models like the GT sports car and stylish compacts such as the CLA sedan. Net income hit a record 9.9 billion euros ($11 billion) last year, and the shares have climbed more than 50 percent over his tenure. 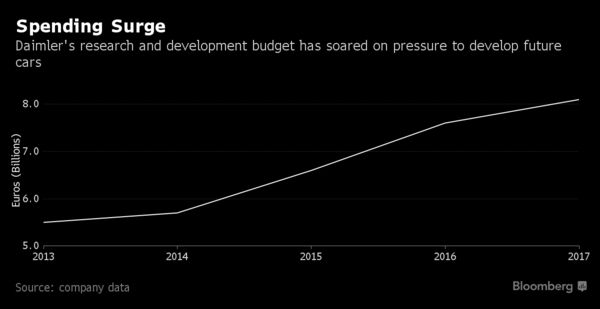 Still, that comeback was in the traditional auto business, while keeping Mercedes up to speed in the future is a tougher challenge. Deep-pocketed technology companies like Apple Inc. and Google parent Alphabet Inc., which has set up mobility unit Waymo, are angling to get in.

Among customary competitors, Ford Motor Co. has staked out an early lead in development and plans to deliver market-ready autonomous cars as early as 2020, while BMW AG aims to introduce the self-driving iNext as its new flagship in 2021, according to Anirudh Venkitaraman, an analyst at Frost & Sullivan.

Tesla Inc. has already made waves with its Autopilot feature, which boasts “full self-driving capability at a safety level substantially greater than that of a human driver.” And while Mercedes has trotted out the show cars like the futuristic F 015 and offers semi-autonomous features, such as emergency braking, which emerged out of the testing in the 1990s, it has yet to set a target for when a fully robotic vehicle will go on sale.

Daimler’s race to catch up is largely being run out of research centers in California and in Boeblingen, near its headquarters in Stuttgart. Christian Weiss, the head of autonomous driving, and Thao Dang, who leads the systems integration team, oversee daily tests on five V-Class vans, pushing them to the limit. The vehicles, packed with computer gear and sporting four sensors visible as yellow domes on the outside, search out tough traffic situations during rush hour.

“The truth for any self-driving vehicle is on the street,” Weiss said during a demonstration that showed how the cars learn to act safely even with incomplete information. “We don’t need to go far around here to find challenging situations” in the congested, winding roads around Germany’s motor city.

Daimler has also stepped up partnerships, joining forces in April with Robert Bosch GmbH, the world’s biggest automotive supplier, to bring driverless taxis to the road by 2023. It’s also cooperating with Uber Technologies Inc. to include Daimler’s self-driving vehicles in its ride-hailing network in the future. Mercedes’s own robo-cars will have a distinct styling, according to Zetsche, who has reluctantly accepted that this is the future.

“I was reticent for a while about the idea of not having a steering wheel and the driver giving up control, not because I’m ‘old school’ but because it’s fun to drive,” he said. “Unfortunately, with ever-increasing traffic congestion having fun while driving is becoming the exception.”