EghtesadOnline: Apple Inc. reported falling iPhone sales, highlighting the need to deliver blockbuster new features in the next edition of the flagship device if the company is to fend off rivals like Samsung Electronics Co.

Investor confidence has been mounting ahead of a major iPhone revamp due later this year. Yet competitors released new high-end smartphones recently, putting pressure on Apple to deliver a device that’s advanced enough to entice existing users to upgrade and lure new customers, Bloomberg reported.

Apple sold 50.8 million iPhones in the quarter ended April 1, down from 51.2 million units in the same period a year earlier, and less than the 51.4 million predicted in a Bloomberg survey of analysts.

"We’re seeing what we believe to be a pause in purchases of iPhone, which we believe are due to the earlier and much more frequent reports about future iPhones," Apple Chief Executive Officer Tim Cook said during a conference call with analysts.

In the past, Apple changed the basic shape of the iPhone about every two years. The iPhone 7, unveiled in September, had similar form and features to its predecessor, extending the cycle to three years. That may have encouraged more customers to delay purchases.

Apple stock slipped almost 2 percent in extended trading. The shares have jumped 27 percent this year and closed at a record Tuesday on anticipation of an iPhone 8 launch in the fall for the 10th anniversary of the device. The company has tested a new type of screen, curved glass, stainless steel materials, new cameras and augmented-reality features. 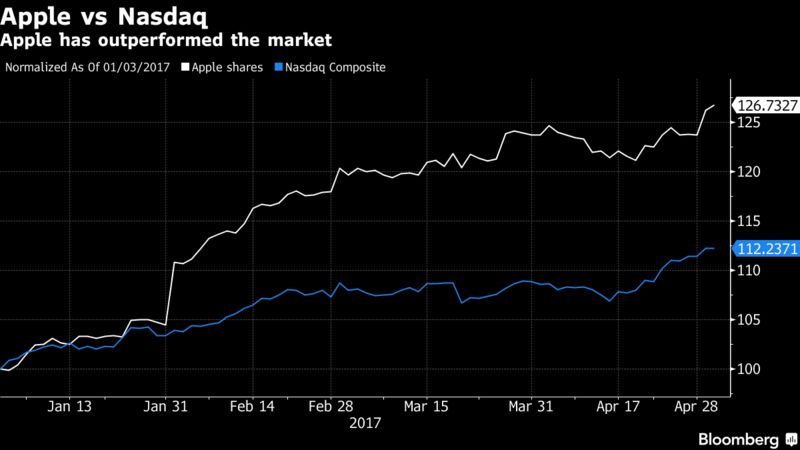 "We agree with the market that a bet on shares of Apple is a bet on the company’s ability to transition from their existing iPhone platform to an augmented reality-driven platform in the future," said Gene Munster, co-founder of Loup Ventures and a former veteran Apple analyst.

Apple had $257 billion in cash and equivalents at the end of the quarter. The company said it will return more of that to shareholders, announcing $50 billion in new buybacks and a 63-cent dividend. Analysts had forecast 62 cents, up from the 57 cents paid in its 2016 fiscal year. The company had already announced $175 billion in repurchases, helping maintain the stock price in lulls between new products. 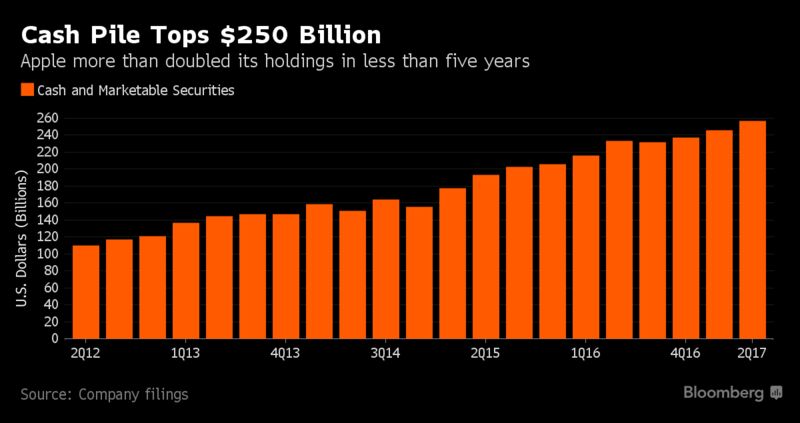 The Cupertino, California-based company also forecast $43.5 billion to $45.5 billion in revenue for the current quarter, below analysts’ estimates of $45.7 billion.

Much is riding on the success of the next iPhone. Smartphone sales growth has been slowing and Apple has lost market share in China, a major source of growth before last year, amid increased competition from local rivals.

"Chinese vendors such as Huawei, Oppo and Vivo continue to make life really hard for Apple in the region," John Butler, a Bloomberg Intelligence analyst, said.

“We expect our performance in China to continue to improve as we go through the year," Chief Financial Officer Luca Maestri said in an interview.

Apple benefited from Samsung’s recall of its Galaxy S7 smartphone last year, but the South Korean company followed up with the introduction of the well-reviewed Galaxy S8 in April. If S8 sales are strong, that may mean fewer new customers for the new iPhone and the services businesses that feed off the device.

Cook has repeatedly sought to highlight Apple’s services, the fastest growing part of the company last year. Sales of offerings like iCloud, the App Store and Apple Music grew 18 percent to $7.04 billion in the quarter. Maestri said the company aims to double annual services revenue by 2020.

Apple’s offshore cash reserves climbed to $240 billion at the start of April, according to the CFO. Cook’s plans for that money have come under increasing focus after President Donald Trump proposed slashing the corporate tax rate on repatriated funds. Maestri said it was too early to say how Apple might spend any cash it brings home.