Musk, who was awarded 5.27 million stock options in 2012 tied to Tesla operational and market value targets, has achieved six of the 10 operational goals to date, up from five at this time last year, according to a proxy statement filed Thursday. The automaker has also met eight of the 10 market value milestones, up from seven last year, the filing shows.

According to Bloomberg, Musk has until 2022 to reach the goals that trigger the payout, but he could cash in the options sooner if the company hits targets ahead of schedule. They are worth an estimated $1.4 billion as of Thursday’s close, Bloomberg calculations show. That would be quite a payday for the enigmatic Tesla chief who has never accepted his nominal salary. 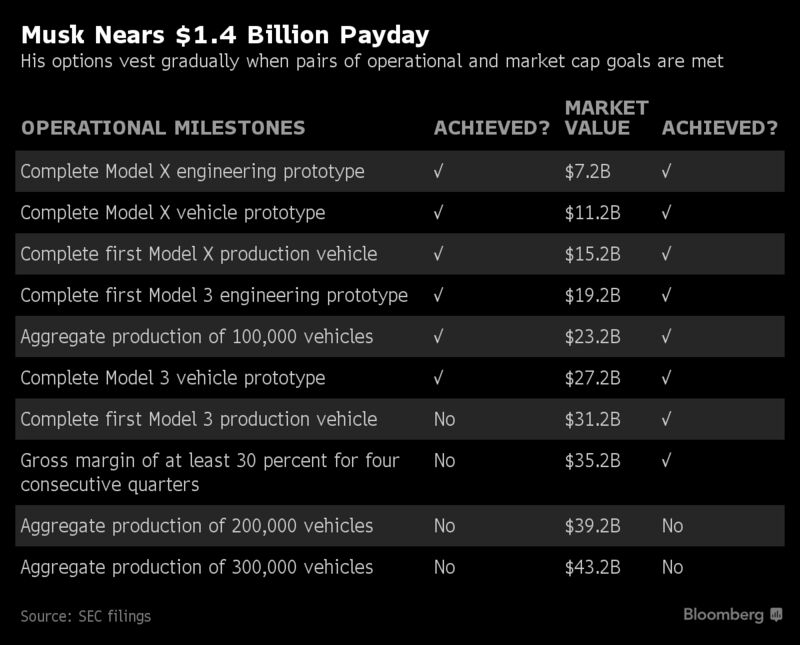 Musk earns one-tenth of the options every time Tesla hits a pair of goals -- one tied to its market value and another to the company’s operations.

Tesla delivered 25,000 vehicles in the first quarter, which vaulted its aggregate number of produced vehicles above 200,000. That milestone won’t be considered achieved until the company’s board has confirmed the number, according to the filing. The Palo Alto, California-based company has said it’ll begin building the more affordable Model 3 in July and has predicted its annual output could soar to 500,000 vehicles by 2018.

In addition to production targets, Tesla has to maintain a gross margin of at least 30 percent for four straight quarters. In the four most recent quarters, the company has posted results ranging between about 19 percent and 28 percent.

For Musk to receive the $1.4 billion, Tesla’s market value also needs to remain above the $43.2 billion threshold for six months, equivalent to a stock price of about $270. The estimate is based on the number of shares outstanding as of Jan. 31. Tesla, which briefly surpassed General Motors Co. earlier this month to became the most valuable U.S. carmaker, had a market value of $49.3 billion as of Thursday’s close.

The $1.4 billion windfall from his options is based on what Musk would pocket if he’d been able to exercise all 5.27 million of them on Thursday, when Tesla shares closed at $302.51 in New York. The securities have a $31.17 strike price. So far, he hasn’t exercised any.

Tesla didn’t name any new independent directors in the proxy. The company said last week it was searching for two new board members who don’t have ties to Musk, as pressure to strengthen management oversight rises amid Tesla’s soaring market value.