Elon Musk rewrites the playbook for launching a new car.

Tesla Model 3 Ramp Up Aims to Crush BMW and Mercedes

EghtesadOnline: One year ago this week, Elon Musk took to a stage to unveil his most important vehicle yet: the $35,000 Model 3. The electric five-seater accelerates as fast as the the best-selling luxury sport sedans in America—the BMW 3 Series and the Mercedes C Class—and costs about the same.

The value proposition was the best ever for an electric car, and the crowd ate it up.

But, according to Bloomberg, none of his pronouncements that night were as audacious as those to come. After taking in about 400,000 deposits at $1,000 a piece, Musk ramped up production plans. And then he ramped them up some more. Now, three months from the official start of production, the billionaire Tesla CEO seems to think he can not only match the performance of those top luxury brands, but outsell them in the U.S., too—in just one year.

Tesla has a number of tricks in store for the Model 3 launch, but first it’s worth taking a moment to appreciate just how high Musk has set the bar: With unusual specificity for an automaker, he disclosed detailed production targets in a call with investors last month that begin to paint us a picture.

Here’s what the Model 3 ramp begins to look like. 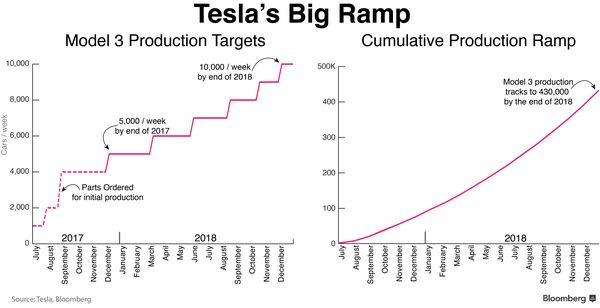 For Musk to hit all of his targets, Tesla would need to build about 430,000 Model 3s by the end of next year. That’s more than all of the electric cars sold planet-wide last year. The rollout will begin in California and move east, focusing on U.S. reservation holders. Even if half of the Model 3 inventory shipped to other countries, U.S. sales under Musk’s targets would outpace the BMW 3 Series and the Mercedes C class—combined.

Another forecast Musk reiterated is that Tesla thinks it can build 500,000 total cars next year. Model S and Model X growth would continue, but at a slowing rate. The chart below, as far as we can figure, is the ramp that Tesla is forecasting. 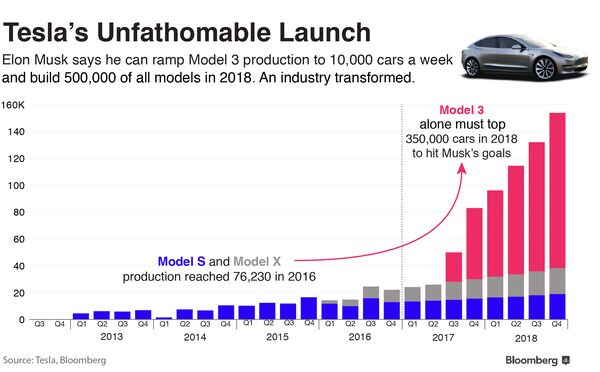 To sell that many $35,000 sedans in the U.S. “would be absolutely unprecedented based on what we know about car markets today and how people spend their dollars,” said Salim Morsy, electric car analyst at Bloomberg New Energy Finance. “It could happen. I’m pretty sure it won’t.”

Virtually every Wall Street analyst agrees. Even the most bullish among them don’t think Tesla can sell half a million electric cars next year, and Musk has a long history of never setting a deadline that he’s likely to keep. But it’s still important to understand the lofty targets Musk is setting, and some of the crafty ways he’s trying to make it happen.

Rewriting the rules for a car launch

Tesla is redefining how cars are developed, built, sold, and updated. Some of the tricks Musk plans to speed up the launch can only be done once. Others may transform the automotive industry much like Tesla’s over-the-air software updates. Here’s what we know:

Tesla is skipping “beta”—sort of. On Friday, Musk fired off a barrage of 50 messages on Twitter while on a flight to Cape Canaveral, Florida. Among them was a six-second video clip, the first glimpse of what he calls a “release candidate” Model 3. The term is more typically used in the software industry, referring to a final version that’s almost ready for public release.

Musk is condensing the typical timeline for a new car. A traditional auto manufacturer spends about six months testing beta cars prior to a rollout. Musk seems to have skipped a step, and is building test vehicles using the same equipment line that will feed mass production. If that’s the case—and this truly is a “release candidate”—then it implies that production is on track. The car looks very much like the vehicles Musk showed a year ago, and that fidelity to the original prototype will have helped keep engineers on schedule.

A standing army of testers. There’s tremendous demand for the Model 3 among Tesla’s 30,000 employees—most of whom are probably unable to afford the pricier Model S and Model X. Musk is putting that interest to use, releasing the first several thousand Model 3s to employee reservation holders.

This is a huge advantage unique to the Model 3. As early problems are identified, they can be fixed at the work site. If there’s a hardware problem that requires a recall of the fleet—as happened with a seat defect in the first 2,700 Model Xs—employees need only drive to work to have them fixed. This means that even while Tesla shortens pre-launch testing, by the time production ramps up to a wider audience, the Model 3 may have nevertheless undergone more rigorous internal troubleshooting than most cars.

Features are being stripped down. One of the primary goals of last week’s Twitter barrage appears to be downplaying expectations for new features. Musk said there will only be one display—the car’s 15-inch touchscreen—with no additional gauges or heads-up-display projected at the windshield.

Additionally, the dual-motor all-wheel drive, and high performance versions of the Model 3 will be delayed for six to nine months to keep the rollout simple. Musk’s stream of clues may have taken the place of a second unveiling he had previously indicated would come by April. It looks like the company decided to keep it simple, and there’s not much more to unveil.

@VoltzCoreAudio Nothing majorly new that a consumer would notice. Lots of new tech in the design and production process though.

It’s simpler to make. Musk has been making the case for the last year that the Model 3 is designed for manufacturing efficiency. Steel is used for some of the body instead of an all-aluminum build. The amount of wiring in each car has been cut in half, from 3 kilometers worth in the Model S to 1.5 kilometers in the Model 3. There’s one screen and one computer now instead of two of each in the Model S. And there are no eccentric flourishes like self-presenting door handles or falcon-wing doors.

Top-tier suppliers. Tesla also gets to pick from the best, most reliable suppliers. When the carmaker first built the Model S, suppliers assumed it would never sell more than 3,000 units and the company would eventually go bankrupt, according to Musk. That’s changed. It “went from basically getting like the worst team on second-tier suppliers to getting the best team on first tier suppliers,” he said in February. “Really big difference.”

If, against all odds, Tesla is actually able to produce 500,000 cars in 2018, there’s still the question of whether it will be able to sustain that kind of demand, which would establish it as the leading U.S. luxury car manufacturer.

Again, Tesla has some levers left to pull. The company has never paid for television or print advertising. There will also be attention-grabbing upgrades. Musk said last week that a crossover version of the Model 3, called the Model Y, will be coming in the next few years. Given U.S. preferences, that’s likely to be Tesla’s most popular car yet, and it's a good strategy to first establish the scale of a mass-market manufacturer before releasing it. And of course, there is the last big mystery...

How far Tesla is going with Autopilot for the launch? In October, Musk set some wild timelines for full self-driving capabilities in the Tesla fleet. The company upgraded the hardware suite of its full line-up of cars to eight surround cameras, 12 ultrasonic sensors, a forward radar, and a massively powerful new computer. He said it was all the hardware that will be needed for driverless transport. By the end of 2017, Musk said, he hoped to travel coast to coast without any driver interaction.

Tesla immediately started charging new customers an extra $3,000 for an option called “Full Self-Driving Capability.” However, the software still hasn’t been released that would take advantage of it, and to date, the pricey option adds no additional functionality.

Musk has dropped a number of hints that those features will start becoming available around the launch of the Model 3. In January, I asked him at what point Full Self-Driving Capability will depart from the Enhanced Autopilot features. His response, via Twitter: “3 months maybe, 6 months definitely.”

Six months would coincide with the July launch. As Musk wrote last week, when explaining why a heads-up display would be unnecessary:

@arctechinc The more autonomous a car is, the less dash info you need. How often do you look at the instrument panel when being driven in a taxi?

Tesla has had a slog over the past few months getting its new Enhanced Autopilot hardware suite to match the performance of the old Autopilot. It’s possible that whatever Tesla has planned for self-driving features will end up delayed.

But it’s also possible the Model 3 will be the first car designed from scratch for automation—navigating city streets, responding to stop signs and stop lights, possibly even making its own turns. Musk is now engaging in a bit of what he calls “anti-selling” on Twitter, downplaying features that will be unique to the Model 3 as he tries to convert some reservation holders to the more expensive Model S. Differentiating the two classes of vehicle will be important going forward. But with Autopilot the entire Tesla lineup may be headed for a launch upgrade.