EghtesadOnline: The two greatest players of this generation have been sent packing from Russia in the same day.

Just hours after Lionel Messi and Argentina were eliminated from the World Cup by France, Cristiano Ronaldo's Portugal fell to a 2-1 defeat against two-time champions Uruguay in the last 16, CNN reported.
Two goals from Edinson Cavani, the second a stunning strike into the far corner, either side of Pepe's equalizer consigned the reigning European champions to defeat and set up a quarterfinal tie with France on July 6. 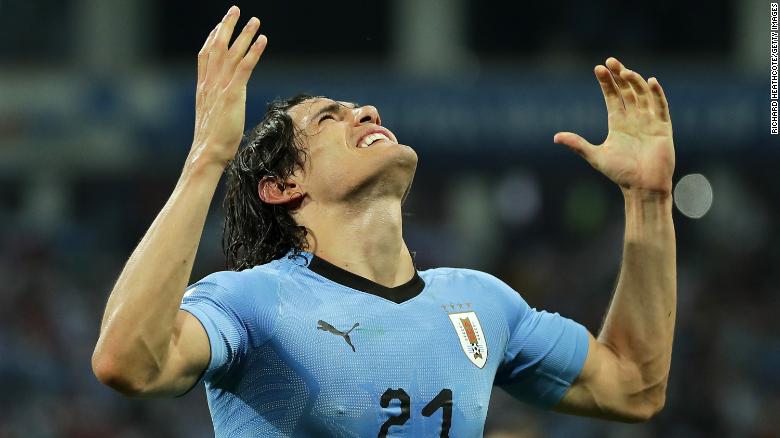 Cavani at the double

Ronaldo was in the tunnel before kick-off bouncing on his toes and grinning excitedly, visibly itching to get onto the pitch.
These are the kind of occasions which bring the best out of him, the nights -- like that memorable one two weeks ago against Spain when he scored a hattrick -- where he craves a moment in the spotlight to add to his legacy.
But it wasn't Portugal's star man who stole the show. Instead, it was one of Uruguay's talismans, Paris Saint-Germain's Cavani, who was the protagonist in another chapter of this tiny South American nation's rich World Cup history. 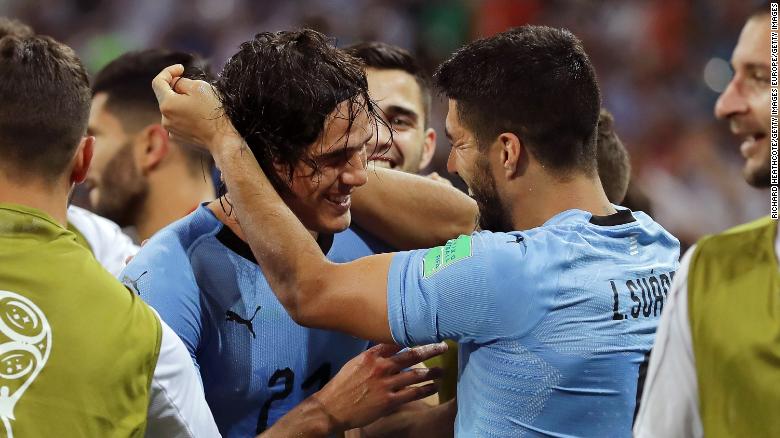 Cavani and Suarez celebrate Uruguay's winner.
Despite boasting some of the world's best attack talents, these two sides thrive in playing the role of underdogs.
But neither had come to Sochi to defend, sensing a place in the quarterfinals was well within their grasp.
And it was Uruguay's star strikers Cavani and Luis Suarez, a pairing who have honed their partnership over more than a decade playing together on the international stage, who took it upon themselves to lead their country into the last eight.
Born in the same town, just three weeks apart, Uruguay's deadly strike duo combined for the opening goal with seemingly telepathic understanding.
Cavani started the move, spraying a pinpoint cross-field pass to Suarez's feet, before continuing his run into the box.
Suarez took two touches, cut inside his marker and curled a cross to the far post where Cavani was lurking unmarked. Though he miscued his header, the ball bounced fortuitously off his shoulder and into the net, setting Uruguay up for a fourth win of this tournament. 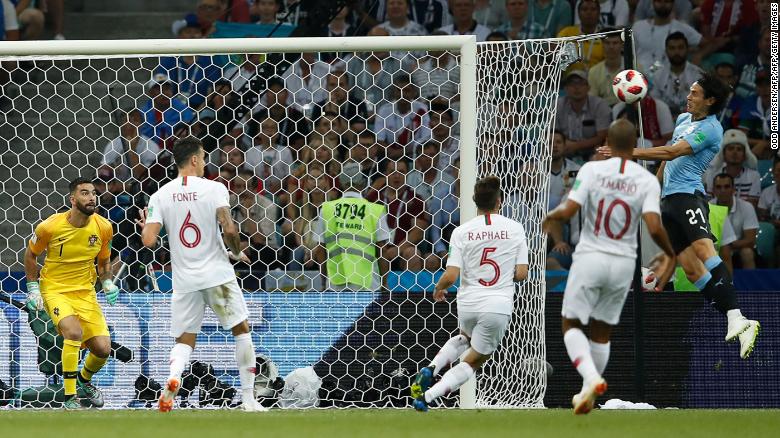 Cavani's header was his 44th for Uruguay

Though Portugal had dominated the ball, they had created very little and now faced the seemingly impossible task of scoring against a Uruguay team that hadn't conceded all year.
Ronaldo had an effort from the edge of the area, which Fernando Muslera gathered with relative ease, before Goncalo Guedes won a free-kick on the edge of the area which was in the proverbial 'Ronaldo territory.'
With the ball placed in an almost identical position to his stunning late equalizer against Spain, Ronaldo stepped back, pulled up the front of his shorts and puffed his cheeks.
But, this time, like many of his previous attempts -- his leveler against Spain was his first direct freekick goal at a major tournament for Portugal in 45 attempts -- the ball failed to clear the wall. 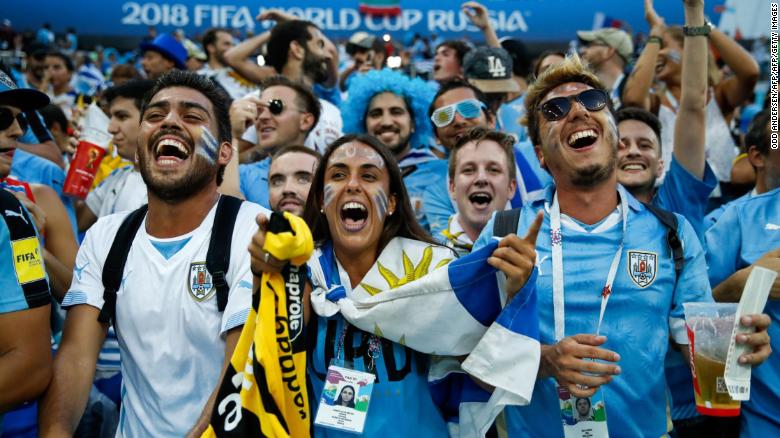 Uruguay's fans celebrated the winner wildly.
Much of Portugal's inability to create was down to Uruguay's incessant pressing and harrying.
Uruguay's success comes from a collective effort that even the two superstars leading the line don't feel is beneath them. On several occasions, Suarez and Cavani could be seen filling in at various positions in defense.
But having looked so solid for the opening 45 minutes, Uruguay's defense switched off momentarily. They allowed a short corner to be taken and Raphael Guerreiro whipped a cross into the box for Pepe, arriving at the far post, to head past Muslera.
Portugal had gradually grown into the game after the restart, thanks in part to coach Fernando Santos' decision to move playmaker Bernado Silva into a more advanced position, but also Uruguay's willingness to sit back and defend their lead. 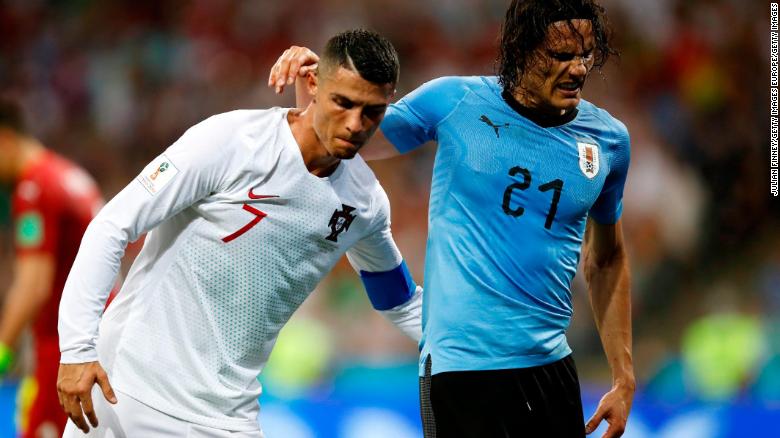 Cristiano Ronaldo helps the injured Cavani off the pitch.
But Portugal's delight would last all of seven minutes as another Cavani goal saw Uruguay retake the lead.
One long, hopeful punt upfield by Muslera fell to Rodrigo Bentancur, who rolled the ball into the path of the onrushing Cavani.
The prolific PSG forward opened up his body and hit the shot first time, curling the ball around Rui Patricio's outstretched arm and into the far corner.
Cavani was injured in the closing stages, hurt while tracking back to defend his own area. He was helped off the pitch by Ronaldo, the man whose potential final World Cup appearance had been ended by the lethal Uruguayan's boot.
World Cup Cristiano Ronaldo Lionel Messi