EghtesadOnline: French President Emmanuel Macron and Iranian President Hassan Rouhani agreed to work together to preserve the nuclear accord with Iran, even as the U.S. makes clear that President Donald Trump will withdraw if the deal can’t be fixed to his satisfaction.

Macron and Rouhani spoke for more than an hour by phone on Sunday and “agreed to work mainly in the next few weeks on protecting the content of the 2015 agreement in all its aspects,” Macron’s office said in an emailed statement.

The French president also told German Chancellor Angela Merkel and British Prime Minister Theresa May this weekend that he stressed during his trip to Washington last week that the U.S. must stay in the deal and integrate it in a larger framework, rather than walking away, according to Bloomberg.

In a readout posted on Iran’s official government website, Rouhani suggested Tehran isn’t interested in changing the accord, setting up a potential clash with the U.S. approaching a critical deadline in May.

The Iranian website quoted Rouhani as saying Iran won’t accept additional restrictions and that the deal, formally known as the Joint Comprehensive Plan of Action, is “by no means negotiable.”

Trump set a May 12 deadline for the U.S. and Europe to address issues that aren’t covered in the nuclear deal, and Iran has “considered a variety of responses for any decision that the United States is going to make,” according to its website.

U.S. Secretary of State Mike Pompeo on Sunday hammered home his boss’s message: the U.S. will pull out of the Iran nuclear deal if the “flawed” accord can’t be fixed to its satisfaction.

“President Trump’s been pretty clear. This deal is very flawed,” Pompeo said in Tel Aviv in a joint appearance with Israeli Prime Minister Benjamin Netanyahu. “He’s directed the administration to try and fix it, and if we can’t fix it, he’s going to withdraw from the deal. It’s pretty straightforward.”

The U.S. remains “deeply concerned about Iran’s dangerous escalation threats to Israel and the region, and Iran’s position to dominate the Middle East remains,” Pompeo said. “The United States is with Israel in this fight.”

Netanyahu said “aggression” by Iran had grown “many fold since the signing of the nuclear deal” in 2015. “Iran has tried to gobble up one country after the other.”

The nuclear pact was signed by Iran, the U.S., China, France, Russia, Germany, the U.K. and the European Union. It gives Iran the ability to enrich uranium for peaceful purposes. Trump has called the accord “the worst deal ever.”

On his first trip as the top U.S. diplomat after being sworn in on April 26, Pompeo spoke to reporters earlier in Riyadh and visits Amman before returning to Washington on Monday. Pompeo also visited Brussels late last week, where he also said that Trump is unlikely to stay in the Iranian deal “past this May.”

It is essential for Gulf Arab monarchies to achieve unity, Pompeo said earlier, in an apparent attempt to resolve the diplomatic crisis between Qatar and a Saudi-led coalition. He said he “stressed the importance” of Gulf unity in talks with Saudi officials. 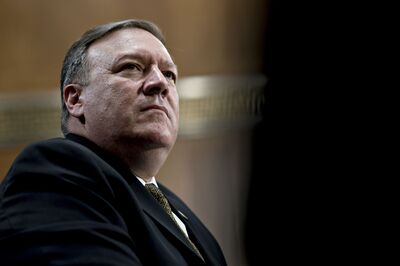 While Trump initially sided with the Saudi-led action, he and other U.S. officials later said the crisis was distracting members of the Gulf Cooperation Council from confronting regional rival Iran.

“I think they would all agree that it’s in everyone’s best interests that the Gulf States all figure out how to be together,” Pompeo told reporters after he left Saudi Arabia. “We’ve got a common challenge in Iran, I think they all recognize that. We’re hopeful that they will in their own way figure out their dispute between them.”

Pompeo succeeded Rex Tillerson, the former top executive of oil giant Exxon Mobil Corp., who was leading U.S. efforts to end Qatar’s isolation. Some officials within the Saudi bloc accused him of siding with the Qataris because of his former energy ties to the gas-rich country.

U.S. and Qatari officials have said Qatar, home to a key American military base used in the fight against Islamic State, has made progress in cracking down on terrorist financing. Qatar and the U.S. in July struck a pact to strengthen Qatari action against terrorist funding, including sharing information and tracking down funding sources.

The U.S. position “changed not long after Trump’s initial tweets seemingly supporting the boycott,” said James M. Dorsey, a Middle East specialist at Singapore’s Nanyang Technological University. “You’ve since had the Tillerson missions, the signing of memorandum of understanding on terrorism with Qatar, and repeated calls for a negotiated resolution.”