EghtesadOnline: As Hassan Rouhani was learning of his re-election to Iran’s presidency on Saturday morning, U.S. President Donald Trump had already touched down in Saudi Arabia on Air Force One, bringing proposals for more than $100 billion in arms sales to Tehran’s fiercest rival.

Nothing could better highlight the challenge the pragmatic Iranian cleric now faces in his second term.

According to Bloomberg, preliminary results suggested Rouhani was on track to defeat hard-line rival Ebrahim Raisi, winning about 57 percent to Raisi’s 39 percent, with about 40 million votes counted. He campaigned on a promise of a more open, prosperous and internationally integrated economy, and that message appears to have resonated with Iran’s young and increasingly urban population.

Yet the strong popular mandate Rouhani received on Saturday is severely limited, both at home and abroad, casting doubt over his ability to carry through a program that’s predicated, in part, on reducing tensions with the West.

Trump’s choice of Saudi Arabia and Israel for his first foreign trip as president illustrates the changed environment Rouhani will face abroad.

Rouhani secured a deal with the U.S. and other world powers in 2015 to end the most painful economic sanctions in exchange for rolling back Iran’s nuclear fuel program. During this year’s election campaign, he pledged to secure the lifting of non-nuclear sanctions that remain in effect, over issues such as ballistic missile tests and human rights. That looks to be a near-impossible task.

On Wednesday, the State Department said it was adding to them. On Thursday, a senior adviser to Israeli Prime Minister Benjamin Netanyahu said the premier was hoping to persuade Trump to impose still more sanctions against Iran when they meet early next week.

The Trump administration is likely to actively discourage global investment in Iran where President Barack Obama had tried to encourage it, said Karim Sadjadpour, Iran specialist at the Carnegie Endowment for International Peace, a Washington think tank.

“Rouhani isn’t going to have a partner for these kinds of policies in Washington any longer,’’ he said. “In the zero-sum game of the Middle East, a better U.S. relationship with Saudi Arabia and Israel will mean a more antagonistic relationship with Iran.’’

Rouhani will also be constrained domestically. In Iran’s semi-democracy, Supreme Leader Ayatollah Ali Khamenei holds ultimate authority and sees his role as protecting the legacy of the 1979 Islamic Revolution. He supports a “resistance” model for Iran’s economy that would make the country less vulnerable to external shocks, but also less open to Western influences.

Nor does Rouhani control Iran’s powerful Revolutionary Guard Corps, which appears determined to continue a muscular foreign policy, hostile to Israel and designed to encroach on U.S. and Saudi interests, from Iraq and Syria to Lebanon and Yemen.

“Trump is very clear, and we want to be clear,’’ said Hamidreza Taraghi, a member of the hard-line Islamic Motalefeh Party’s central committee, who backed Raisi in the election. “We want to decide the geopolitical situation of this region.’’

Raisi ran a populist campaign that portrayed Rouhani as elitist and soft on security. He criticized the 2015 nuclear deal, while saying he wouldn’t kill it. Rouhani’s plan to boost foreign investment and technology transfer from the West was a policy of “begging,’’ Raisi taunted.

Still, the wide margin of his defeat and a strong turnout provoked by the stark choice offered to voters is a setback for Iran’s conservatives. Rouhani will now have four more years to effect incremental change and, crucially, assign major energy contracts. Unlike in 2013, Iran’s conservatives had rallied behind a single candidate in a bid to unseat Rouhani, or weaken his mandate. Instead, the president won at least 4 million more votes than four years ago.

If Raisi, a political novice, was trying to establish himself as a candidate to replace the 77-year-old Khamenei when he dies, he has instead eliminated himself, according to Foad Izadi, a conservative-leaning professor of international affairs at Tehran University. Not only was Raisi a dull and inexperienced candidate, his campaign team and policies borrowed heavily from former President Mahmoud Ahmadinejad, whose populist rule ended in 2013 and is too fresh in peoples’ memories.

That was a mistake on Raisi’s part, said Izadi: “People expected more of him.”

Rouhani, however, is no Iranian Emmanuel Macron, the unabashedly liberal and internationalist new French president who this month defeated another populist candidate. Iran’s liberal leaders have been under house arrest since 2011. Rouhani inherited their voters, but he’s been unable or unwilling to get them released. Iran also still executes hundreds of people each year, many for non-violent offences.

The 68 –year-old cleric has been a stalwart of the Islamic Republic since the fall of the Shah. He was put in charge of Iran’s army after the revolution, becoming head of air defenses and later deputy war commander during the eight-year Iran-Iraq conflict, and was secretary of the Supreme National Security Council for 16 years.

During his first term, Rouhani managed to bring inflation down to just under 10 percent from well over 30 percent, while stabilizing growth and boosting oil production. Yet there’s a long way to go. The official unemployment rate has risen above 12 percent and more than twice that figure for under-25s. Iranians continue to eat less meat, rice and other staples than they did 10 years ago. 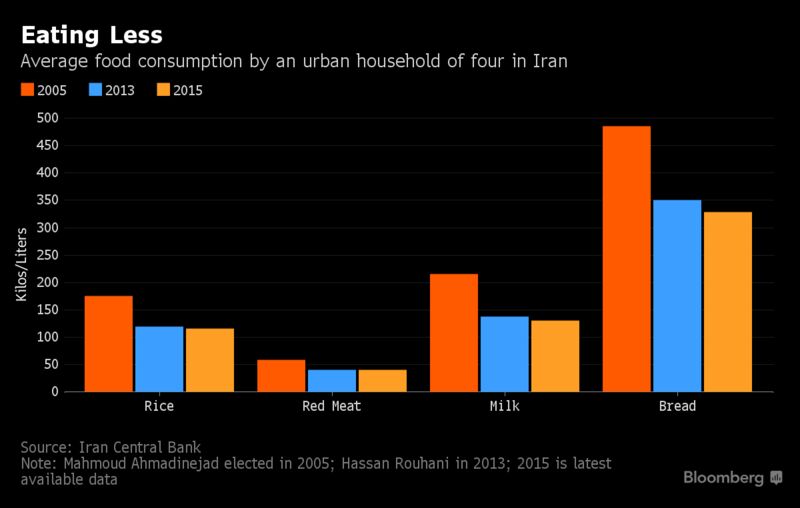 The to-do list Rouhani set out for his second term is even more ambitious. It includes fixing a banking system crippled by bad property loans; expanding a private sector squeezed out by the state, including the Revolutionary Guards, who have their own business interests; and formalizing citizens’ rights and freedom of information.

“I think Rouhani will be a lot more bold in his second term,’’ said Cyrus Razzaghi, president of Ara Enterprise, a consultancy that works with foreign investors. “Quite frankly I didn’t believe him when he started talking about getting a nuclear deal to lift sanctions, but he did it. He’s already trying to abolish the death penalty for drug offenses, which accounts for the vast majority of executions in Iran. So, it’s an uphill struggle, but maybe he can get rid of these sanctions too.’’

Rouhani’s deep roots in the regime and control of parliament make him politically strong, but still no match for Khamenei in any serious dispute over policy, according to Izadi. The Supreme Leader also has a record of cutting presidents down to size in their second terms, turning the reformist Mohammad Khatami into a lame duck and clashing publicly with Ahmadinejad.