EghtesadOnline: Since the U.S. imposed new sanctions on Tehran over a ballistic missile test Friday, Iran’s conservative media has railed against the government for being too soft, the military has tested another projectile, and officials have generally thumbed their noses at a White House warning that they were now “on notice.”

What hasn’t happened, however, is as important: no official has threatened to abandon the nuclear deal signed in 2015 under the previous U.S. administration of President Barack Obama.

That’s in part because the new sanctions are largely symbolic and in line with Obama’s policy. It’s also a sign of how many reasons Iran has to stick with the so-called Joint Comprehensive Plan of Action and ensure that if it must collapse, Washington -- not Tehran -- takes the blame, according to Bloomberg.

“For the moment they have support of the international community and they see continuation of the JCPOA as a strength,” said Aniseh Bassiri Tabrizi, research fellow at the Royal United Services Institute in London. “The best position for the Iranians is exactly where they are.”

Such relative stoicism from a famously prickly regime may not last. The limited U.S. measures and tit-for-tat Iranian response may represent just the start of a deliberate cycle of escalation, said Tabrizi. The “on notice” warning from National Security Adviser Michael Flynn was followed on Sunday by a pledge from Israeli Prime Minister Benjamin Netanyahu to assemble “a partnership against Iran’s defiant aggression.”

Still, for now even conservatives hammering President Hassan Rouhani ahead of elections in May -- for signing the deal in the first place and then for failing to respond to the new U.S. administration with sufficient force -- don’t appear to be pressing to scrap the agreement.

President Donald Trump “is the best opportunity for us, because he will show the essence of the U.S. to the world and this is where we can prove our rightfulness,” Alireza Zakani, a former legislator and opponent of Rouhani, said in an interview with the Fars news agency on Saturday.

Iran expected the new administration to start piling on pressure in non-nuclear areas such as missile tests and human rights to provoke the regime into harsh retaliation, so “it could be held responsible for the failure” of the nuclear deal, said Amirali Abolfath, an independent Tehran-based analyst. “So far, Iran has been rational.”

Another reason for Iran to avoid collapsing the deal is financial. Although Trump’s Twitter claims that Iran had been “on its last legs” before the nuclear agreement allegedly showered Iran with $150 billion of unfrozen funds are inaccurate on both counts, the agreement has been a success for the country’s economy.

Iran’s oil production has bounced back to pre-sanctions levels. In addition, although foreign investment hasn’t yet come close to the hoped-for $30 billion to $50 billion per year, it’s increased by 42 percent since the agreement took effect, the government said in January. 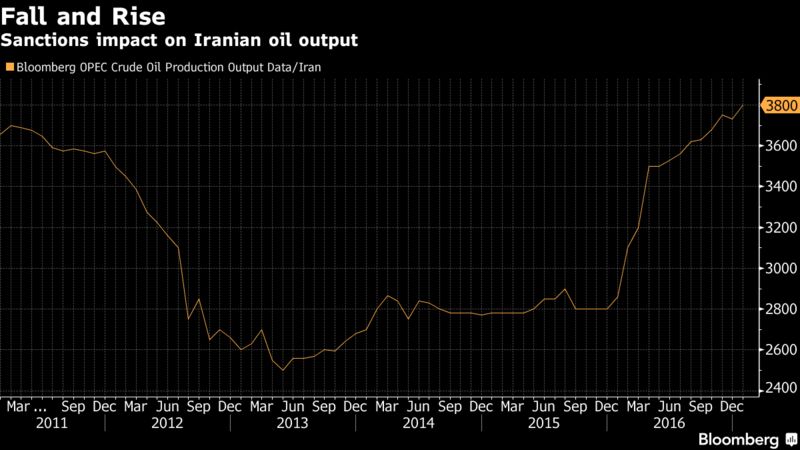 The government is counting on those flows to support the budget for the coming fiscal year, which begins in March. Government expenditure will rise by 11 percent from last year and investment by 12 percent, according to the budget, which assumes economic growth of 7.7 percent for the year.

If Iran were to cease compliance with the agreement and restart full-scale enrichment of nuclear fuel, it would risk uniting Europe, Russia and China with the U.S. in pressing for a “snapback” of sanctions. The budget would then unravel and the economy could suffer.

‘Gone Back in Time’

Even minor sanctions could poison the atmosphere for investments, said Cyrus Razzaghi, president of Ara Enterprise, a Tehran-based business consultancy. “The psychological impact on foreign investors can’t be ignored,” he said, noting that some Asian and European clients had already held back on investment plans as they waited to find out what policies the Trump administration would pursue toward Iran.

Still, the effects of the latest sanctions are likely to be limited, said Razzaghi. Major international banks never restarted business with Iran. Meanwhile, any U.S. attempt to target foreign companies for doing business in Iran more widely would put the U.S. in breach of the nuclear agreement, he said.

In the meantime, the diplomatic benefits of the deal are also important to the Iranian regime, which is anxious to play a role with Russia, the U.S. and others in resolving the Syrian conflict. That gives Iranian leaders a further reason to moderate their responses, said Sanam Vakil, an associate fellow at the Royal Institute of International Affairs, also known as Chatham House, in London.

The nature of the U.S.-Iranian relationship has clearly snapped back already from one of cautious engagement under Obama to, at best, containment under Trump, Vakil said. “Anything is possible now,” she said. “I feel we have gone back in time.”