EghtesadOnline: The dollar is set to fall 5 percent in the next few months, the Federal Reserve isn’t raising interest rates anytime soon and U.S. economic data is only going to get worse.

That’s what Morgan Stanley chief global currency strategist Hans Redeker told clients in a note published Thursday, citing in-house indicators showing U.S. domestic demand is set to fade in the coming months. It didn’t take long for markets to prove him prescient. The greenback fell 1.3 percent Friday, capping its worst week since April, after the Commerce Department said U.S. second-quarter gross domestic product advanced at about half the rate economists had forecast, according to Bloomberg. 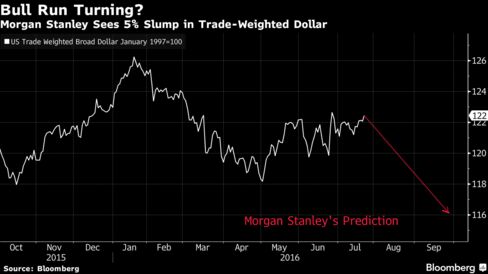 “We are quite pessimistic about, first, the outcome of the U.S. economy,” Redeker said in an interview on Bloomberg Television Friday, before the GDP report’s release. “When you look at our internal indicators, which capture domestic demand very well, they are suggesting that the demand strength is going to fade from here.”

The greenback had rallied in recent weeks on mounting speculation the Fed will hike rates in the coming months following better-than-expected data on jobs, retail sales and industrial production. Dollar bulls’ hopes were dampened Wednesday after a lukewarm policy statement from Fed officials that signaled only a gradual pace towards tighter monetary policy. They were dashed after Friday’s GDP print, which showed a 1.2 percent annualized increase in the April-June period, less than the 2.5 percent median forecast of economists surveyed by Bloomberg.

Derivatives traders are now betting there’s only about a 1-in-3 chance of a rate hike this year, down from more than 50 percent at the beginning of the week. July data on payrolls and manufacturing, set for release next week, will give investors a clearer read on the path of Fed policy through the end of the year.

Further dollar strength will be limited as policy divergence between the U.S., Japan and Europe slows, according to Steven Englander, global head of Group-of-10 currency strategy at Citigroup Inc.

“The dollar still benefits when U.S. growth looks OK, but call it a limping divergence trade, not the kind of divergence trade we were talking about last year or the year before,” Englander said Friday on Bloomberg Television.