EghtesadOnline: Crude settled above $50 a barrel as investors assessed the likelihood of a deal to reduce supply after Russia’s energy minister said the country’s oil output may rise to a record next year. 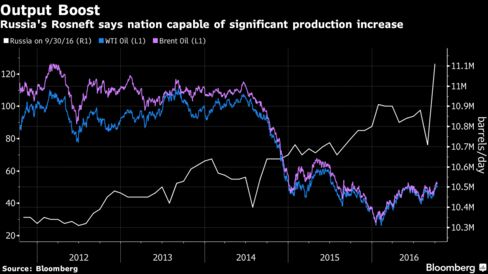 Oil has fluctuated near $50 a barrel amid uncertainty about whether the Organization of Petroleum Exporting Countries can implement an accord to reduce oil output when they gather at an official meeting in November. A committee will meet later this month to try to resolve differences over how much individual members should pump.

“After the bulk of declarations from producer countries has come through after the Algiers meeting, there’s not much fundamentally to be driving the market,” Harry Tchilinguirian, head of commodity markets strategy at BNP Paribas SA in London, said by telephone. The market will “remain in this holding pattern until we have more clarity and possibly get news from the technical meetings that are going to be held in Vienna. After that, it will be more waiting until we find out whether or not OPEC actually delivers on the promise of a supply cut,” he said.

West Texas Intermediate crude for December delivery rose 22 cents to settle at $50.85 a barrel on the New York Mercantile Exchange. Brent for December settlement increased 40 cents to end the session at $51.78 a barrel on the London-based ICE Futures Europe exchange. The global benchmark traded at a premium of 93 cents to WTI.

November gasoline futures rose 2.5 percent to settle at $1.5314 a gallon. Delta’s Trainer refinery in Pennsylvania, which is operated by subsidiary Monroe Energy LLC, will keep its sole fluid catalytic cracking unit offline for at least another month for maintenance and repairs, according to people familiar with operations.

The market may stabilize by the middle of next year at $52 to $55 a barrel, Rosneft PJSC Chief Executive Officer Igor Sechin said Thursday, cautioning that prices above $50 may spur the recovery of U.S. shale production.

Rigs targeting crude in the U.S. rose for an eighth week to the highest level since February, according to Baker Hughes Inc. on Friday. American drillers added 11 rigs to 443, the data showed.

The Bloomberg Dollar Spot Index, which tracks the currency against 10 major peers, rose 0.3 percent at 3:16 p.m. in New York. A stronger U.S. currency reduces the appeal of dollar-denominated raw materials as an investment.

A stronger dollar is “a big limiting factor for crude oil prices,” John Kilduff, a partner at Again Capital LLC, a New York-based hedge fund that focuses on energy, said by phone. “Until we see a real sort of turnaround in the supply balance sheet one way or the other, we’ll probably chop around some more.”