The bonds of Qatar, Bahrain and Dubai are rallying in the wake of the kingdom’s $17.5 billion transaction that was completed yesterday. The offering, the biggest by an emerging-market nation, is being hailed as a likely spur to other Saudi companies in coming weeks and months, reports Bloomberg. 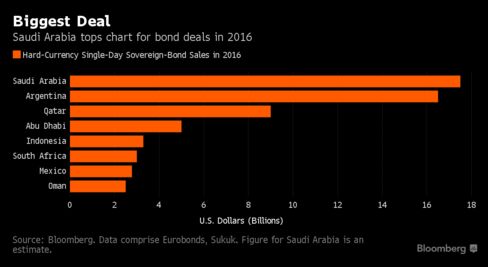 The "success of the bond will open the gates for a lot more Saudi paper," Apostolos Bantis, a Dubai-based credit analyst at Commerzbank AG, said by e-mail. "Not only will the sovereign issuers tap the market, but also the banks and first time corporates will try to sell bonds."

Wednesday’s sale is handing fresh impetus to a region where the collapse in crude oil prices has eroded budgets and forced governments and companies to turn to international capital markets to raise cash. Sales from the six nations that comprise the Gulf Cooperation Council climbed to a record $66 billion this year, according to data compiled by Bloomberg.

Since Saudi Arabia issued price guidance for its securities on Tuesday, Qatar’s 2046 bonds have jumped, driving the yield 11 basis points lower. Yields on Bahrain’s 2044 notes have fallen 35 basis points, while those on Dubai’s 2043 debt have declined eight basis points, according to data compiled by Bloomberg. The yield on Saudi Electricity Co.’s 2044 bonds has tumbled 45 basis points, the data show.

Saudi Arabia’s own bonds have gained on the first day of trading. The five-year securities rose 0.60 cents on the dollar at 12:55 p.m. local time, the 10-year notes added 0.87 cents and the 30-year bonds 1.29 cents, according to bid data compiled by Bloomberg.

Increased issues will help companies in Saudi Arabia, the biggest Arab economy, wean themselves off of bank loans, their traditional source of finance. It will also help reduce strain on the banking system, as oil’s plunge has sapped liquidity, pushing interbank interest rates to their highest in seven years.

Saudi Arabia’s banks have barely issued securities in international markets this decade because they were flush with oil revenue. The lenders have only one dollar bond currently outstanding, compared with more than 2,500 from lenders in the United Arab Emirates.

The new bonds will "help develop the kingdom’s debt markets by introducing a more sophisticated type of investor," Mohieddine Kronfol, the chief investment officer of global sukuk and Mena fixed income at Franklin Templeton in Dubai, said in an e-mail. "There are also positive ripple effects for GCC fixed income as well as more global investors take a closer and longer-term look at the region."