EghtesadOnline: France produced the most power from fossil fuels for September in 32 years to help meet demand as nuclear generation dropped.

Output from coal and gas plants more than doubled as Paris-based Electricite de France SA was forced to keep reactors offline for inspections. French month-ahead power prices have risen to near the highest since 2009, reports Bloomberg. 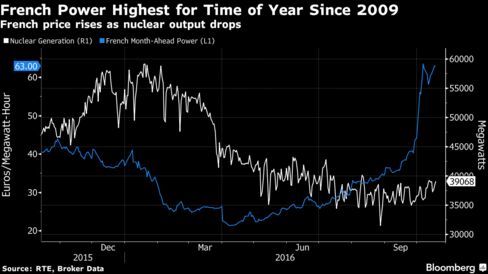 “The availability of French nuclear continues to alarm market participants,” said Bruno Brunetti, managing director of global power at Pira Energy Group in New York. “With the lack of French exports supporting thermal generation, we have revised upward forecasts of coal-fired dispatching by roughly 5 terawatt-hours through 2017 in western Europe.”

EDF’s reactors produced 26.6 terawatt-hours of electricity in September, the least since August 1998, prompting “heavy use” of stations burning coal and gas in a trend that has been increasing since April, according to a report by French grid operator Reseau de transport d’electricite. Thermal power generation was 4,132 gigawatt-hours, or 11 percent of the total.

France has seven fewer reactors available than at the same time last year after EDF announced it needed more time to carry out inspections to rule out potential anomalies on steam generators at 18 of its 58 units ordered by the nation’s nuclear regulator. EDF cut its nuclear output targets for the year on Sept. 21 after the safety checks were taking longer than expected. Six reactors are due to return this week.

The lowest hydropower levels for 10 years are exacerbating the tight supply situation, according to Pira. A 25 percent drop in hydropower levels in October so far compared with last year “compounds the shortage in nuclear generation and adds a further upside price risk in an already bullish environment,” Brunetti said.