EghtesadOnline: OPEC’s decision last month to reverse its policy of unfettered production and cut oil output to boost prices may be at odds with the industry’s most important long-term trend: demand for what they produce could start falling within 15 years.

If rapid improvements continue in renewable energy, electric vehicles and other disruptive technologies, petroleum consumption will peak in 2030 and decline thereafter, according to a report from the The World Energy Council. As the globe’s largest producers gather in London this week for the Oil and Money conference, they might want to check their assumption that the market will grow for decades to come, reports Bloomberg. 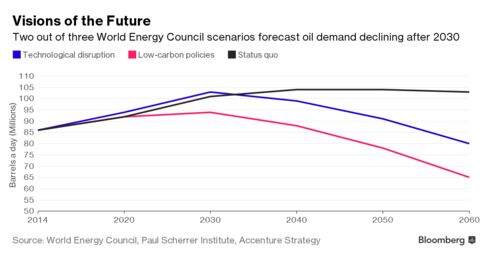 The plunging cost of renewable energy -- with solar module costs falling 50 percent since 2009 -- is already upending the business model of utilities. Disruption could spread to the oil industry as electric vehicles become more economic than gasoline or diesel cars, potentially displacing millions of barrels of daily fuel use by the late 2020s. Projections for decades of demand growth that underpin investments in oil projects could be misplaced.

“The longer term outlook, beyond 10 years, is certainly less rosy,” said Alex Blein, London-based energy portfolio manager at Amundi, which holds more than $1 trillion of assets. “Given the advances in battery technology, by 2030 carbon-powered vehicles will be the exception rather than the norm. This will inevitably impact on oil demand.”

When the Organization of Petroleum Exporting Countries last cut production to support prices in 2008, the decision made economic sense. At that time, the phrase “peak oil” described the growing fear that the world was running out of petroleum, so the group’s 1 trillion barrels of reserves would be guaranteed to fetch a higher price in the future. That calculation may be changing, with a growing risk that some resources might not be needed.

This is evident in demand estimates from the International Energy Agency, which have been revised down over the past 20 years, just as projections for renewable energy increased, said Michael Liebreich, founder of Bloomberg New Energy Finance. He predicts the growth of electric vehicles and improvements in fuel efficiency mean oil demand will peak around 2025 and decline in the 2030s. 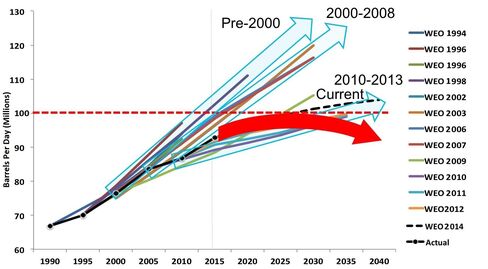 “The IEA has significantly raised its estimates for the deployment of renewables” reflecting energy-policy changes around the world, the Paris-based agency said in an e-mailed statement. It’s central demand scenario currently sees oil use expanding to 2040.

The anticipated increase in oil demand of about 20 million barrels a day over the next two decades will probably be big enough to overwhelm the impact of the electric car, said Spencer Dale, chief economist for BP Plc. Those vehicles will have a bigger impact in 30 to 50 years, although there’s a chance it could happen sooner, he said.

“Suppose people start buying EVs because of what it says about them, rather than the economics,” Dale said on Oct. 11. Existing demand models “may get thrown out the window.’’

There’s some evidence this is happening. Tesla Motors Co.’s Model S accounted for almost a third of all U.S. luxury sedan sales in the third quarter, surpassing the BMW 7-Series and the Mercedes-Benz S-Class.

The WEC, which advises governments and other organizations on policy, outlines three oil-demand scenarios. If rapid adoption of new technology and business models disrupts the existing system, demand could peak in 2030 at 103 million barrels a day, compared with about 86 million in 2014, and decline by 0.9 percent a year to 80 million in 2060. 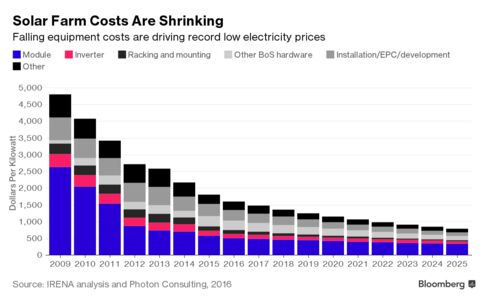 More aggressive adoption of low-carbon policies could bring a lower 2030 peak of 94 million barrels a day, while the status quo would mean demand reaching a plateau of about 104 million between 2040 and 2050, the WEC said.

Bloomberg New Energy Finance is a patron of the WEC.

A permanent shift from growth to decline would have an uneven impact on the giants of today’s oil world.

Saudi Arabia, the world’s largest oil exporter and de-facto leader of OPEC, is banking on its crude reserves of 266.5 billion barrels lasting another 70 years, according to a bond prospectus.

The kingdom has announced some long-term plans to diversify its economy away from oil, “but in a scenario where demand growth peaks sooner pressure to do this will intensify,” said Carsten Fritsch, an analyst at Commerzbank AG.

Companies including Royal Dutch Shell Plc and BP are already shifting their output in favor of natural gas, for which demand keeps increasing in all of the WEC’s scenarios. Still, in the longer term gas demand for power generation is also vulnerable to competition from renewables or tighter limits on carbon dioxide emissions.

Brent crude this year has averaged less than half its 2014 value, when OPEC decided not to reduce output amid a glut. The global benchmark is up almost 13 percent since the group’s decision last month to cut supply and slipped 0.1 percent at $51.90 as of 1:37 p.m. Hong Kong time.

The greatest risk is that resources become “stranded,” meaning their value evaporates because it’s no longer economic to extract them, said the WEC. If oil producers fail to navigate the challenges of peak demand, “the destruction of vast amounts of public and private shareholder value is unavoidable.”