EghtesadOnline: Turkey’s lira depreciated to an all-time low and its stock and bond markets sold off as expectations the U.S. will raise interest rates this year added to concern about the nation’s economic outlook.

According to Bloomberg, the currency lost as much as 0.8 percent per dollar to record 3.1131, before trimming losses to 0.2 percent as of 4:28 p.m. in Istanbul. The Borsa Istanbul 100 Index headed for the longest losing streak in three months and the yield on the government’s 10-year bonds exceeded 10 percent for the first time since July.

Here are some of the highlights of Turkey’s markets: 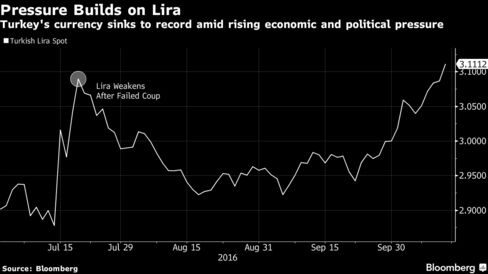 The currency has weakened most among 24 emerging market tracked by Bloomberg over the past month as growth slowed, the government said its budget deficit will widen and the country extended a state of emergency it imposed after a failed coup in July. Meanwhile the central bank has slashed borrowing costs this year, diminishing the appeal of lira assets as investors brace for higher U.S. interest rates that may spur outflows from emerging markets.

“I think the central bank’s hasty rate cuts have played a large role in this,” Murat Gulkan, a managing director at money-manager Unlu Portfoy in Istanbul, said by e-mail. “All they’ve accomplished is to cause the lira to lose value, and the central bank to lose credibility in its anti-inflation stance.”

While inflation slowed this year to 7.28 percent in September, it remains more than 2 percentage points above the central bank’s target. Policy makers have cut the overnight lending rate by 250 basis points since March.

The lira’s relative strength index fell to 26.5, the lowest in more than a year. A level below 30 signals to some analysts that a security is oversold. The currency’s three-month implied volatility, a gauge of expected price swings, fell 10 basis points from a more than four-week high on Wednesday to 11.85, it’s first decline in four days.

U.S. central bankers debating the merits of raising borrowing costs last month described the decision not to as a close call, with several saying a rate hike was needed “relatively soon,” minutes of the September meeting showed. Traders raised the odds of an increase in U.S. rates by the end of the year to 66 percent from 59 percent at the end of September.

Data released on Wednesday showed the Turkey’s current-account deficit in August was wider than expected, adding to a list of risks that are weighing on investor sentiment. A rebound in crude oil prices is fueling bets that the shortfall in Turkey, a net energy importer, is unlikely to narrow further, adding to pressure on the country’s finances since its tourism industry collapsed this year.

The “data for August disappointed, and showed tendency for wider deficit going forward,” Commerzbank AG’s London-based economist Tatha Ghose, who sees the currency weakening to 3.2 per dollar this year, said in an e-mailed report. “A firmer oil price and collapsing tourism revenue are unambiguously negative for the current account.”

Turkey’s benchmark index of stocks fell 0.7 percent, bringing its four-day slide to 1.4 percent. Akbank TAS was the biggest contributor to the decline, losing 2.1 percent, followed by Turkiye Garanti Bankasi AS’s 1.7 percent retreat. The yield on the government’s 10-year bonds rose for a fourth day to 10 percent.

The decline across Turkish markets comes amid growing concern among some investors over President Recep Tayyip Erdogan’s ambitions to consolidate power. The ruling AK Party will submit a new draft constitution to parliament soon, Prime Minister Binali Yildirim said in televised remarks on Wednesday. That could pave the way for a referendum on moving the country to a presidential system of governance from parliamentary rule.

International investors attribute “a higher risk premium to greater concentration of power in one hand,” Ghose said. “They will, at least initially, view this skeptically.”