EghtesadOnline: You know the war on coal isn’t working when it’s up more than 50 percent this year. Prices in Europe and Asia have rebounded from a half-decade of declines after China cut domestic production so much that local consumers had to step up overseas purchases.

Even as nations are shutting plants and the world’s biggest wealth fund is selling out of coal companies, demand will remain little changed for decades, according to the International Energy Agency and BHP Billiton Ltd.

Analysts at Commerzbank AG and energy consultants Nena AS see prices holding at current levels at least until the end of the year as the northern hemisphere winter will boost demand and France keeps some nuclear plants offline for safety checks, according to Bloomberg.

“Because of the anti-coal war, investors want to diversify away,” said Guillaume Perret, director of Perret Associates in London, which provides research on the industry. “But the demand is still there.” 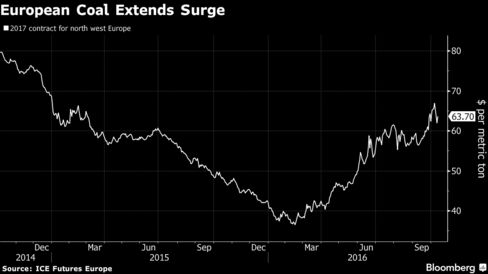 Demand for fossil fuel-fed power is expected to increase after Electricite de France SA cut output at some of its 58 French nuclear plants for extended safety checks. The outages cut EDF’s available atomic power to 46 gigawatts, 16 percent below usual levels, according to Bruno Brunetti, a senior director of electricity at Pira Energy. A gigawatt is enough to power 2 million European homes.

Miner BHP predicts coal use worldwide will continue at current levels for the next two decades, while IEA analysts see demand rising 0.4 percent a year through 2040 in its base-case scenario. In Europe, coal production fell 3.4 percent last year, while use of the fuel only dropped by half that amount even with Britain taking steps to close all of its coal plants by 2025, BP Plc data show.

Coal demand remains robust because “a lot of the existing coal capacity has been added recently,” said Matt Brown, an analyst at Poeyry Oyj. “We are in a business with long-lived assets.”

Investor support for coal is waning, hurting supply, as the world’s economies attempt to shift away from fossil fuels. The amount of planned coal-fired generation capacity fell 14 percent this year through July as institutions including JPMorgan Chase & Co., and Citigroup Inc. pledged to scale back participation in coal projects. Norway’s sovereign wealth fund, the world’s biggest, started excluding some mines and utilities using the fuel from its investments this year.

Coal for delivery to northwestern Europe next year has jumped about 80 percent from a record low in February to $65.25 a metric ton, according to data compiled by brokers. Newcastle thermal coal prices for November, an Asian benchmark, are up 69 percent this year to the highest since January 2014.

China, the biggest producer of the fuel, is now boosting efforts to bring back some production. That’s because imposing limits earlier this year to reduce a glut and cut pollution drove up domestic costs

“The supply situation in China will ease again soon, partly because the government is now taking countermeasures,” said Barbara Lambrecht, an analyst at Commerzbank in Frankfurt. Prices will probably fall gradually next year as Chinese production increases, she said, without providing a specific forecast.

Coal may get further support if supplies from exporter Colombia are interrupted after a referendum rejected the peace treaty between the government and the Revolutionary Armed Forces of Colombia, or FARC, according to Perret Associates. In Indonesia, production at the world’s biggest exporter of thermal coal is still below capacity after storms this year.

“The strength in coal is amazing,” said Trevor Sikorski, an analyst at Energy Aspects Ltd. in London.