Gold Bulls Flee at Fastest Pace Since May on Rate Outlook

Investors are bracing for more declines, cutting their bets on a bullion rally by the most since late May. 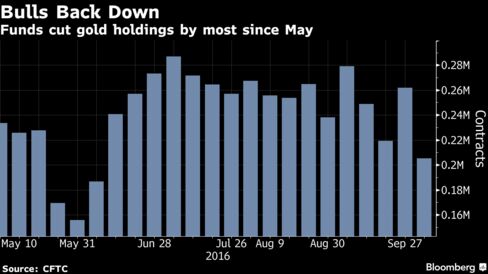 Open interest in gold futures is slumping. Prices for silver, platinum and palladium have also declined. Higher rates reduce the appeal of precious metals as a store of value. A resilient U.S. job market and gains for the service economy have signaled that expansion can continue even if rates rise, curbing the need for haven assets, according to Bloomberg.

“The interpretation of jobs has to leave us with the Fed moving by year-end probably, and that has to be supporting the dollar, pressuring gold,” said Rob Haworth, a senior investment strategist in Seattle at U.S. Bank Wealth Management, which oversees $133 billion in assets.

The net-long position in gold futures and options fell 22 percent to 205,176 futures and options for the week ended Oct. 4, according to Commodity Futures Trading Commission data released three days later. It was the biggest drop since the period ended May 24. Short holdings, or bets on price declines, surged by 59 percent, the most since May 2014.

Futures traded on the Comex in New York retreated 5 percent last week to $1,251.90 an ounce on Friday. Gold surged 25 percent in the first half of the year amid a slowdown in global growth. Since the end of June, prices have dropped more than 4 percent as leaders in Europe and Japan took steps to shore up economies, while the U.S. expansion stayed strong. On Monday, the metal rose 0.7 percent to $1,260.80 at 10:31 a.m. in New York.

On Friday, Cleveland Fed President Loretta Mester said there was a “strong, compelling case” to increase borrowing costs even after the Labor Department published a weaker-than-expected U.S. payrolls report. That day, gold fell to the lowest since June. Fed Bank of Richmond President Jeffrey Lacker and Chicago Fed President Charles Evans also made comments last week that signaled higher rates are probably on the way.

Adding to gold’s woes has been a strengthening dollar. The U.S. currency is trading near a two-month high against a basket of 10 counterparts, reducing demand for alternative assets.

Other precious metals have also retreated. Silver futures plunged 9.6 percent last week in New York, the most since 2013, and money mangers reduced their wagers on a rally to the lowest since June.

Investors are still expanding holdings in gold-backed funds. Assets in exchange-traded products rose 9.1 metric tons to 2,046.4 tons as of Friday, the highest since 2013, data compiled by Bloomberg show.

Gold’s recent price declines could present a “strategic buying opportunity” that may open up should prices drop substantially below $1,250, Goldman Sachs Group Inc. said in a report dated Oct. 6. While the decline over the past month has been in line with the bank’s bearish outlook, there could be a case for purchases if the selloff deepens, according to analysts including Jeffrey Currie and Max Layton.

At the same time, there are still doubts over where the U.K.’s post-Brexit economy is heading. Fallout from the nation’s vote to leave the European Union could spark global malaise, and prompt some investors to seek the safety of bullion.

“The EU is kind of digging in their heels now because they don’t want other people to leave, and all of that is going to be positive for gold,” said Adrian Day, president of Adrian Day Asset Management in Annapolis, Maryland, which oversees $190 million. “But that should also be good for the dollar. Gold has been struggling, and you have a lot of nervous holders of gold and gold stocks.”