Saudi Arabia’s Tadawul All Share Index, whose 10-day volatility surged to the highest since February, tumbled 2.2 percent at the close in Riyadh, the first decline in four days. Shares in Dubai, Abu Dhabi, Kuwait and Bahrain also slid, dragging the BGCC 200 Index, which comprises the biggest and most liquid stocks in the six-nation Gulf Cooperation Council, down 1.2 percent, reports Bloomberg. 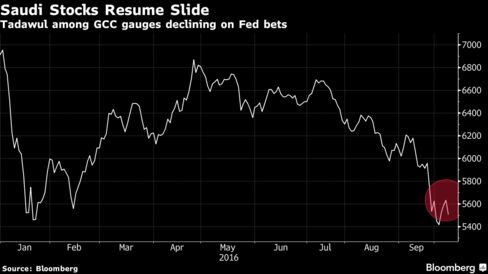 Emerging-market stocks and currencies fell on Friday after a report showed further growth in the U.S. labor market in September, bolstering the case for the Fed to raise interest rates by the end of December. There’s a 64 percent chance the U.S. will increase borrowing costs before the end of the year, according to federal funds futures prices.

“Global markets ended the week in the red,” said Hisham Khairy, the Dubai-based head of institutional trading at Mena Corp. Financial Services, one of the United Arab Emirates’ biggest brokerages. “The U.S. jobs report missed estimates, but not by much. Some Fed officials commented that the number was solid enough for another rate hike soon.”

Dubai’s DFM General Index decreased 0.2 percent to 3,348.14, falling for a fifth day in the longest losing streak since May 4. The gauge’s 14-day relative strength index dropped to 30, the level that signals to some technical analysts it may be poised to reverse direction.

On Thursday “we had a weekly negative close under the 3,370 support for the DFM General Index,” Khairy said. “The market could extend losses to the 3,250 support.” 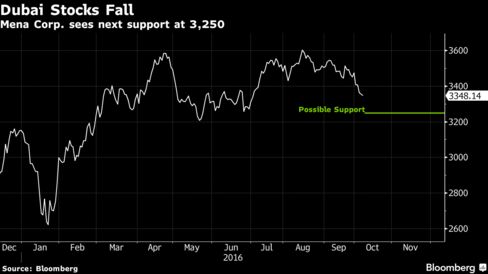 Trading across the GCC was thinner than normal, with about 138 million shares changing hands in Dubai’s main gauge, less than half the average of the past 180 days. Volumes in Abu Dhabi and Saudi Arabia were 86 percent and 29 percent below the average, respectively.

Egypt’s EGX 30 Index advanced 0.8 percent, extending its winning streak for a fourth day as investors anticipate the central bank will float the Egyptian pound in an effort to end the country’s foreign currency shortage and seal a $12 billion loan from the International Monetary Fund.

Africa’s third-biggest economy must finish taking measures related to the exchange rate and subsidies before the IMF’s board can meet to approve its loan request, IMF Managing Director Christine Lagarde said Saturday. Those actions are almost completed, she said. With the pound trading in the black market at an almost 40 percent discount to the official exchange rate, Egyptian authorities are coming under increased pressure to devalue the currency.

About 142 million shares traded on the main index, 25 percent below the 180-day intraday average. Commercial International Bank Egypt, the nation’s biggest publicly traded company which was already at a record high, climbed 1.9 percent.