EghtesadOnline: In the hottest battleground for emerging-market bond deals, JPMorgan Chase & Co. is outflanking HSBC Holdings Plc for the first time in a decade.

The New York-based bank is threatening to dislodge its British rival as the biggest arranger of new issues among the nations of the Gulf Cooperation Council after topping the league table at the end of the third quarter, according to data compiled by Bloomberg. JPMorgan is moving up because governments and companies in the Middle East are borrowing more than ever and wooing American investors to soak up the extra supply, according to Matthew Hartley of law firm Allen & Overy LLP. 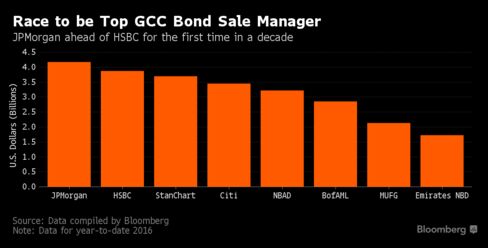 Bond sales in the six-nation GCC rose to a record $44 billion in the first nine months of 2016 as crude prices below $50 a barrel pushed issuers to cover their revenue shortfalls with debt. Business for global investment banks continues to boom in the fourth quarter, with Bahrain raising $2 billion yesterday and Saudi Arabia and Kuwait said to be seeking $20 billion between them, reports Bloomberg.

“JPMorgan has a very good emerging-market franchise and has made more of a push in the region over recent years,” said Hartley, a London-based partner at Allen & Overy, the largest legal-advice firm for sukuk and Islamic financing by transaction value. “Since access to the American market would be key for some of these issues, JPMorgan would have an advantage there.”

The U.S. bank’s ascent to the top was the result of its participation in some jumbo sovereign deals, including a $9 billion offering by Qatar, a Middle East record, Abu Dhabi’s $5 billion sale and Oman’s two deals that collectively raised $4 billion.

Bond sales from the region have already surpassed the $43.6 billion issued in all of 2012, the previous record. The combined budget deficit of the GCC nations is projected by economists to rise to 12.3 percent of gross domestic product in 2016, compared with a 3.3 percent surplus two years ago, while growth is forecast to slow to 1.8 percent, almost half the pace last year.

"We expect an abundance of primary-market issuance from the Middle East,” said Doug Bitcon, a fund manager at Rasmala Investment Bank Ltd. in Dubai. “If you look at credit spreads, the region’s governments, financial institutions and corporates would be crazy not to tap the market.”

HSBC’s nine-year streak as the region’s biggest deal maker had been built on the back of deep lending relationships, with the bank usually managing transactions for its clients. HSBC remains the top arranger of syndicated loans in the GCC, which have surged 27 percent this year to $81 billion. JPMorgan is third.

Both JPMorgan and HSBC declined to comment on the rankings.

“If you assume oil prices remain at around $50, there is likely to be a similar funding need from those sovereigns as we’re seeing this year,” said Stefan Weiler, the London-based head of debt capital markets for central and eastern Europe, the Middle East and Africa at JPMorgan.

Other contenders for the top slot are Standard Chartered Plc, which was ranked third at the end of the third quarter but climbed to No. 2 yesterday after the Bahrain government sale. Bank of America Corp.’s Merrill Lynch unit climbed 28 places to sixth after being picked for the Qatar and Abu Dhabi deals.

Japanese banks are flocking to the GCC too. Mitsubishi UFJ Financial Group Inc. vaulted 40 places to seventh on the league table as it took part in the Qatar and Oman loans both as a lender and as an adviser. Mizuho Financial Group Inc. jumped to the 10th place this year from 32 via the Qatar deal. National Bank of Abu Dhabi PJSC is the highest-ranked local lender on that list at No. 5.

A Dow Chemicals joint venture with a state-owned Kuwaiti company plans to raise as much as $3 billion this year, people familiar with the matter have said. Both JPMorgan and HSBC are among the sale managers, according to the people.

Issuers “are doing bigger or longer-dated deals and they need to access a wider investment base in the U.S., Asia and Japan,” said Abdul Kadir Hussain, head of fixed-income asset management at Arqaam Capital Ltd.