EghtesadOnline: The dollar strengthened the most in two weeks as hawkish comments from a Federal Reserve official spurred wagers that U.S. interest rates will rise before the end of the year. The pound slumped to its weakest level since 1985, while stocks in Europe rallied.

The greenback extended its winning run versus the yen to a sixth day as a Bank of Japan survey showed companies trimmed their inflation forecasts. Sterling tumbled on mounting investor concern that the U.K. is heading for a so-called hard Brexit. European stocks were set for their longest run without losses in a year, fueled by a recovery in banks and a rally in Britain’s equities that sent the FTSE 100 Index above its highest-ever close. Italy’s longer-dated bonds underperformed as the country held its first sale of 50-year securities. The Bloomberg Commodity Index fell as crude oil retreated from a three-month high. 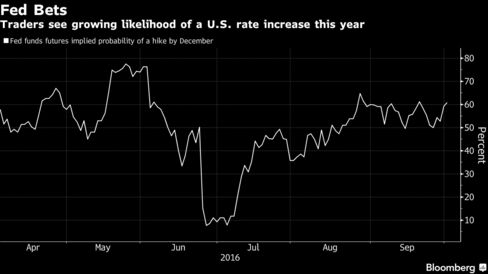 The dollar got a boost as futures traders increased their wagers on higher borrowing costs, with the market-implied odds of a Fed hike by the December meeting rising to 61 percent on Monday, up 10 percentage points from a week earlier. Fed Bank of Cleveland President Loretta Mester, one of three policy makers to dissent to favor an increase at the September meeting, said Monday that she expects the case for a rate hike to remain “compelling.” Richmond Fed President Jeffrey Lacker, who has previously argued that officials “need to get on with it,” is due to speak Tuesday. Arguments for tighter policy were strengthened as reports showed American manufacturers’ output and new orders expanded in September.

“Strong U.S. data is of course supporting the dollar because strong data are a necessary condition for a rate hike,” said Esther Reichelt, a Frankfurt-based currency strategist at Commerzbank AG. “The dollar still seems the best bet for now, but recent strength does not indicate a game changer.”

The pound fell as much as 0.8 percent to $1.2737. Sterling is down against all its 16 major peers since Prime Minister Theresa May’s weekend announcement that Britain would trigger its exit from the European Union in the first quarter of 2017. Declines have extended since she was said to refuse to prioritize the protection of the financial-services industry in negotiations with the EU. The currency has been hurt by speculation that the government will pursue immigration curbs over full access to the EU single market.

“We have the market facing the reality that Brexit is about to begin and we could be faced with hard Brexit,” said Jane Foley, a senior currency strategist at Rabobank International in London.

Australia’s dollar fell as much as 0.4 percent after the central bankkept its benchmark interest rate at a record-low 1.5 percent, a decision forecast by all 28 economists in a Bloomberg survey.

India’s rupee gained as the central bank cut interest rates in its first policy meeting since a leadership change. The benchmark was lowered to 6.25 percent from 6.50 percent, the Reserve Bank of India said in a statement in Mumbai on Tuesday. The move was predicted by 16 of 39 economists in a Bloomberg survey, with one seeing a cut to 6 percent and the rest forecasting no change. The rupee appreciated 0.2 percent. The country’s bonds also advanced, with the yield on securities due September 2026 down five basis points to 6.72 percent.

Most emerging-market currencies retreated, with the South Korean won falling 0.6 percent. The Russian ruble and the Mexican peso both fell as oil declined. Financial markets in South Korea and Malaysia resumed trading after a holiday on Monday, while mainland China remained closed for a week-long holiday.

The Stoxx Europe 600 Index added 0.8 percent, with Deutsche Bank AG one of the biggest gainers among lenders. Daimler AG and BMW AG pushed a gauge of automakers ahead.

Deutsche Bank advanced for a fourth day, rising 2.2 percent. The lender should be able to weather its problems, JPMorgan Chase & Co. Chief Executive Officer Jamie Dimon said in a phone interview with CNBC. Deutsche Bank’s stock and debt have been under pressure since the Justice Department requested $14 billion to settle the mortgage probe, and pares losses late last week after a report that it was nearing a smaller settlement.

The U.K.’s FTSE 100 Index headed for a record close as the weaker pound fueled gains in exporters.

The Bloomberg Commodity Index fell 0.3 percent. Crude oil declined 0.7 percent to $48.48 a barrel in New York, losing ground for the first time in a week before data that’s forecast to show U.S. stockpiles expanded. Production from Libya, among countries exempt from an OPEC output cut, rose to 500,000 barrels a day and will climb further this month, a state oil company official said.

Gold slid for a sixth day, its longest losing streak since August, as investors anticipate higher U.S. interest rates and UBS Group AG said it was negative on the metal.

The yield on Treasury two-year notes reached the highest in almost two weeks, while those 10-year securities were little changed at 1.62 percent, after climbing six basis points over the previous two trading days. A market gauge of inflation expectations advanced to a four-month high on Monday.

Italy’s longer-dated bonds underperformed as the country was said to be selling 5 billion euros of 50-year securities. The extra yield, or spread, that investors get for holding 30-year bonds instead of those maturing in a decade reached the widest since Sept. 22. Ten-year bonds advanced, reducing losses that pushed the yield up on Monday by the most Sept. 9.

Japan’s 10-year bonds reversed earlier losses after demand strengthened at a sale of the tenor, with the bid-to-cover ratio increasing to the highest since June. The securities yielded minus 0.075 percent, compared with minus 0.055 percent ahead of the auction.