EghtesadOnline: Risk appetite returned to global markets on speculation Deutsche Bank AG will pay less than half of a penalty sought by the U.S., sparking a rally in stocks and sending Treasuries tumbling.

Equities extended their longest monthly advance since June 2014 and the Dow Jones Industrial Average climbed more than 160 points as a financial companies surged. The euro erased losses, while Treasuries fell with gold amid lower demand for haven assets. Oil posted its first September increase since 2010 as OPEC agreed to an output cut earlier this week, according to Bloomberg. 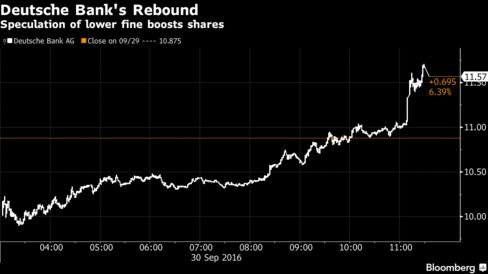 Relief swept over global markets as Agence France-Presse reported that Deutsche Bank is near a $5.4 billion deal with the U.S. Department of Justice to settle a probe related to bad mortgages. Traders have kept a close watch on the lender as it struggles with tougher capital standards and soaring legal bills. While its shares have lost about 50 percent in value this year, systemic concerns have a way to go to reach levels sparked by the collapse of Lehman Brothers Holdings Inc. in 2008 after steps to shore up the financial system.

“There’s a little bit of recognition of the reality that Deutsche Bank is not Lehman,” said John Stoltzfus, chief market strategist at Oppenheimer & Co. in New York. “The banks, as result of all the regulatory changes since the world crisis, are in better shape to withstand this.”

In a memo to staff on Friday, Chief Executive Officer John Cryan said he is taking the settlements with other banks “as a benchmark,” echoing previous remarks that he expects U.S. authorities to scale back their initial request of $14 billion.

Even with Friday’s optimism, it was a tough week for some of the biggest lenders, with worries about Deutsche Bank followed by job cuts at Commerzbank AG, a lawsuit settlement for Royal Bank of Scotland Group Plc and prospects of cost reductions at Credit Suisse Group AG. In the U.S., the future of Wells Fargo & Co. CEO John Stumpf looks tenuous after an intense grilling by lawmakers over the unauthorized-account scandal.

“There may be speculation about the fine,” said Michael Woischneck, who manages about $180 million as senior equities manager at Lampe Asset Management in Dusseldorf, Germany. “All of the problems that were there this morning are still there and will still be there next week.”

The S&P 500 rose 0.8 percent to 2,168.27, posting a fourth consecutive quarterly gain.
Financial shares in the gauge jumped the most in eight weeks, after falling yesterday to the lowest since Aug. 2. Costco Wholesale Corp. rallied to boost consumer-staples companies after its earnings beat estimates. The Dow climbed 164.70 points, or 0.9 percent, to 18,308.15.

Hong Kong shares led losses in Asia with the city’s stock-exchange link to Shanghai having already closed before a week-long holiday in China. Inflows via the channel helped drive a 12 percent gain in the Hang Seng Index this quarter, the region’s best performance.

The MSCI Emerging Markets Index dropped for the first time in four days, while posting its best quarter since 2012.

The euro rose 0.2 percent to $1.1239, after falling as much as 0.6 percent. The currency capped a monthly gain as a report showedinflation in September in the euro area accelerated to the fastest since late 2014 and after Deutsche Bank rebounded.

"If rumors of a much-lower-than-expected fine are substantiated, this will be positive for European banks of course, but also the EUR/USD as well,” said Brad Bechtel, a currency strategist at Jefferies Group LLC in New York.

Treasuries have rallied in 2016,defying consensus forecaststhat yields would rise, as investors have sought havens over concerns ranging from stagnant global growth to fallout from the U.K.’s Brexit vote. The bond market was whipsawed by central banks during the month, rising after the European Central Bank didn’t expand its stimulus program only to fall after the Federal Reserve and Bank of Japan maintained accomodative policies.

Oil climbed 0.9 percent in New York as equities rose and the dollar retreated against its peers, bolstering the appeal of commodities. Crude surged 7.9 percent in September and surged the most in more than five months after the announcement of the deal, which will see the Organization of Petroleum Exporting Countries reduce production to a range of 32.5 million to 33 million barrels a day.

"This has been a momentous week," said John Kilduff, a partner at Again Capital LLC, a New York hedge fund focused on energy. "OPEC has gotten some reward for this nascent effort at coming together."

West Texas Intermediate for November delivery rose 41 cents to settle at $48.24 a barrel on the New York Mercantile Exchange. Prices climbed 8.5 percent this week and slipped 0.2 percent this quarter. Total volume traded was 13 percent below the 100-day average at 2:36 p.m.